Could the man who killed Coogie be the very same one who saves Kiesha?

That’s the idea hinted at in this week’s The Chi, which also touches on a sad reality about missing-children cases: When the kid in question is Black and doesn’t have a squeaky clean back story, it’s really hard to get anyone — including the Chicago Police Department — to care.

The hour picks up where last week’s left off: With Kevin staring down a gun on the front steps of the trap house where Nock is supposed to be. Jake and Papa urge him to leave, but he repeats that he’s not going without his sister. Eventually, though, they all realize they’re in real danger and take off. Meanwhile, Nina and Dre distribute fliers with Kiesha’s face on them until Tracy — remember her? the mom of the dead basketball player Quentin fathered? — approaches them and says the fliers won’t do anything. “If you really want to find her,” she advises, “you’re going to need an army and a plan. Let me help you.” 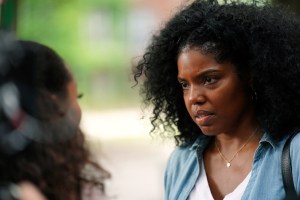 So Nina and Dre attend a meeting of ROCK — Remembering Our Chicago Kids — where not all of the moms in attendance are supportive of Tracy’s plan to hold a vigil to draw attention to Kiesha’s now-weeklong disappearance. Kiesha had a racy Instagram account that she hid from her folks, it turns out, and some of the moms think it’ll taint the group if they throw their support behind Nina and Dre and their family. Eventually, Jada gets Emmett to give Nina the name of Kiesha’s finsta. Then a stressed-out Nina and Dre fight (“She’s my child, not yours!” Nina says in one terrible moment), and when even Kevin bails on the vigil, Nina attends by herself.

But eventually, both Kevin and Dre show up at the event. So does Ronnie, who earlier in the episode was beat by a group of younger guys and rescued by Papa’s pastor father. He also visited Ethel in the nursing facility, muttering about how he was going to try to be a hero. And while Nina is on the vigil’s stage, talking about how she needs to find her daughter, Ronnie notices a sketchy looking dude standing in the crowd. Eventually, the dude notices him noticing him, and takes off quickly. Ronnie tries to follow but loses him in the mass of people. Might that be the man responsible for Kiesha’s disappearance?

* At Jake and Kevin’s urging, Trig and Imani go into Nock’s trap house — guns blazing — and tie nearly everyone up. Then they go room-to-room, looking for Kiesha. They don’t find her, but the women being forced to prostitute themselves there bring up some bad memories for Imani. “That could’ve been me,” she says later, crying a little. “I want to help them.”

* In a bid to save money, Emmett, Tiff and their son move in with Jada. And later on, Dom angrily demands that Emmett hire more staff to help her in the kitchen of their after-hours restaurant, because she can’t keep up with the demand.