Blue Valley High’s resident “mean girl” has taken her title to a new extreme — and in doing so, she gave local hero Stargirl quite a beatdown.

Cindy Burman, it has now been revealed, knows alllll about her father aka Dragon King’s dealings with the Injustice Society. In fact, she wants in! To prove her case, Cindy defied Dad’s orders and suited up for a clash with Stargirl, who she doesn’t know to be her high school frenemy Courtney Whitmore (played by Brec Bassinger).

The introduction of teen villainess Shiv was met with veritable cheers from DC’s Stargirl fans, as part of what was arguably the freshman series’ strongest episode yet. “Honestly, the whole cast, the producers… everyone is just astounded by the reviews,” Cindy’s portrayer, Meg DeLacy, tells TVLine. “They knew it was a good show, but the reaction is taking everyone by surprise.”

Ahead of Episode 8 (premiering Monday on DC Universe and airing Tuesday on The CW), TVLine invited DeLacy, whose previous TV credits include The Fosters, to react to Shiv’s arrival and preview what’s to come.

TVLINE | Is a part of you relieved that we the viewers finally know why — as Jenny so aptly put it — Cindy is such a B?
A bitch? [Laughs] It is a relief, it is. I was really excited for that episode to come out, and also Episode 8 coming up, just so people could understand what makes Cindy so mean, that there are reasons why she does the things she does. It was nice to finally allow people to get the full scope of things, instead of that one dimension.

TVLINE | And as an actress, I imagine there’s the concern, “Oh man, people are going to think I’m so one-note.”
Completely. I’ve played mean girls before, so it’s been cool to play a mean girl and allow people to really hate her, because that’s when you know you’re really affecting someone. My only job is to really affect people and take them out of their normal lives and allow them to go into this fantasy, this alternate world. It’s cool to do that, because people really do get angry! [Laughs] They really hated Cindy for a while. 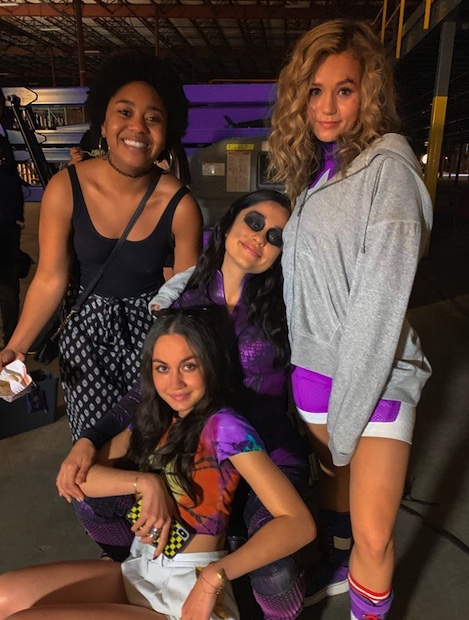 TVLINE | Looking at social media, it seems like you and the other girls get along famously and are really close. Did that make it fun and or hard to be so rude to them?
It was fun! I think it’s almost easier to be mean to someone that you’re close to, because you’ve already explored the world of being nice and vulnerable and allowing yourself to get close. So when you have to get mean, there’s more comfort there — and obviously we know that we’re all acting. One of my best friends is Yvette Monreal (who plays Yolanda) and I have to be so mean to her on this show. Literally right afterwards we’re like, “I’m so sorry, I didn’t mean that!” There are so many bloopers surrounding those scenes because we turn it off right after.

TVLINE | Speaking of Yolanda, settle this burning question: How did Cindy get her hands on the photo she sexted to Henry?
I don’t know if anyone remembers this, but there was scene, I know it’s very quick—

TVLINE | I know where you’re going, but Cindy had her hand on his phone for a half a second.
A half a second, yes. [Chuckles] He was showing his friends the photo and had it cued up, and I grabbed it, saw it, and sent it to myself. I mean, we could go into the whole “supervillain powers” thing, like I’m really quick and cyborg-esque…. 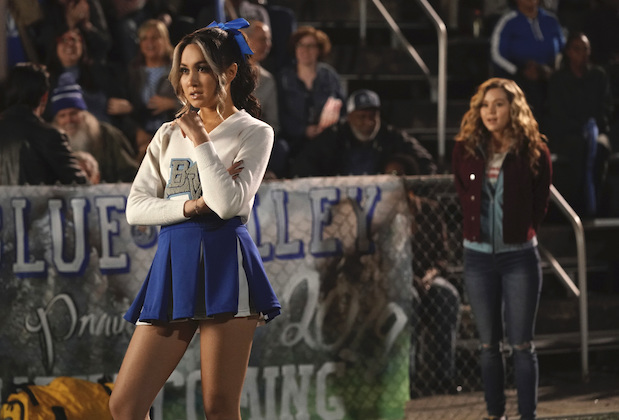 TVLINE | In last week’s episode, Cindy and Courtney partnered for that science lab, and then there was talk about hanging out…. If they had actually hung out that Saturday night, do you think they were they on a path towards “friendship,” in Cindy’s mind? Could that have been a turning point?
It could have been a major turning point for her. Everything was falling apart for her. Jenny wasn’t complying, my dad’s nowhere to be seen — plus he doesn’t really care in general — and Henry is going through these weird headaches and all this stuff with his dad…. Reaching out to the new girl was kind of the only option, because everyone else is pretty afraid of me. If we did end up hanging out and not in a full-blown fight, I think that it would have been really interesting. Cindy was allowing herself to feel things, to let someone in, when usually she is so, so cold. She doesn’t like warmth. That’s why her house is so empty.

TVLINE | That sterile house! I was like, “Were they not done dressing this set…?
[Laughs] I was like, “Does anyone live here? Are you guys done?” And they were like, “Yep, we’re done!” 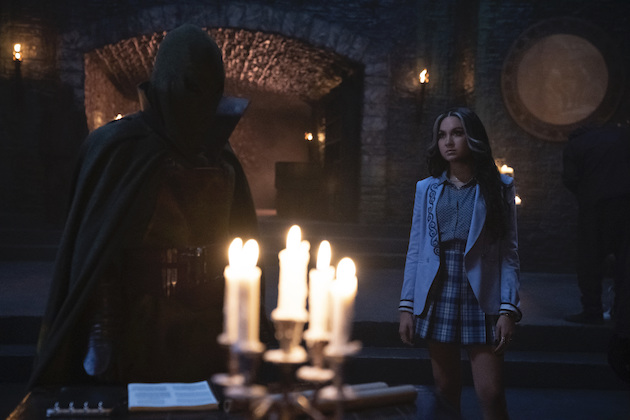 TVLINE | Cindy’s father referred to her being his “greatest experiment.” Are there blanks to be filled in on what exactly he did to her back in the day?
There are a few droplets of information to come, yes, as the show goes on. Cindy has been experimented on since she was a very young girl, and that was excruciating — and it’s a huge daddy issue she has. Also, to be accepted by her father and by the ISA, that’s all she wants. That’s what she’s been training to do. She’s, like, half-human, so of course she’s not going to feel things, and that’s scary for a 15-year-old. On top of all the other things come with being a  teenager, she’s juggling all of that. Dragon King has his own motives and reasons why he does this — he’s been alive forever, literally — so yeah, it’s hard for her. It’s hard just living in the Burman household in general.

TVLINE | Hence the name Shiv.
Exactly. He implanted knives in my wrists, so you can imagine how painful that was for her — and he did that when I was a kid. A child. That was just me lashing out like, “I’m not a kid, let’s see what I can do. I can kill whoever I want.”

TVLINE | Any fun anecdotes from your first big fight scene with Brec [Bassinger]?
That fight was insane, it looked like a video game. Granted, a lot of it was stunts [by the stunt team], but we had sequences where Brec and I would do it ourselves, and I remember the scene where I was yelling and screaming as if my face was burning off — and it was hilarious. It was so hard to keep a straight face with Brec! People were like, “Oh my god, we didn’t even realize you could scream that loud!” But that whole fight, just getting to see the first cut a few days after we did it, looked epic. 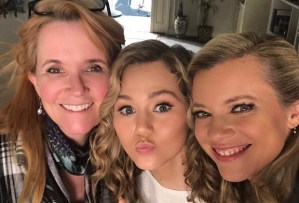 TVLINE | Lea Thompson directed that episode, which is interesting because [Stargirl creator/series EP] Geoff Johns told me that Back to the Future was the vibe he was aiming for with this show.
And we actually watched that movie at the kickoff party. So meeting Lea on the day that we were starting, I was tripping out, like, “I just watched your movie, and here you are directing — and you’re really good!” I was so lucky to have her be the director of my episode. She is insanely talented, and so patient. I think that being an actor and a director, you know how to talk to your actors and get what you want. I’m sure it was awesome for her to jump into a superhero show [after directing Switched at Birth, Katy Keene and numerous sitcoms], but it was awesome for me to be able to be directed in such a proper way.

TVLINE | Are we to wonder if Cindy heard Courtney’s name being called out [by Pat] as she scrambled away from their big fight?
There was a lot of noise going on, so no, I don’t think I heard her name. I heard a noise and I was like, “Oh crap, I need to get out of here. My dad doesn’t knew I took the suit, I need to get out.” I mean, I’m starting to keep a secret just as much, even though I don’t have a mask — but that is simply poor planning on Cindy’s part, because she was just so excited to get out there. So no, I didn’t hear anyone yell out “Courtney.”

TVLINE | I was thinking that Courtney should switch to a ponytail, so she and Stargirl don’t share the same distinct mane of blonde beach waves.
It’s just playing on the whole fantasy of what a mask can do to your face.

TVLINE | Lastly, what will Dad have to say about Cindy suiting up and striking out on her own, against his wishes?
I don’t think he’s going to be happy about it, I really don’t. But I’m too blinded, I’m too excited to want to share in the fact that I got out there finally. She doesn’t think before she fights!

TVLINE | But will it earn her a seat at the ISA table?
That’s her whole goal, so… maybe her passion for the ISA will show — “Hey, I’m good!” Or Dad will be like, “I can’t believe you did that, you are never fighting again!” It could go both ways. She’s just excited to run home and tell Dad what she did.