THE PERFORMANCE | Truth be told, we’ve been remiss in not recognizing Dormer’s work sooner. But, in a way, it’s a testament to how completely she vanishes into each of the personas inhabited by Magda, a shape-shifting demon bent on sparking an apocalyptic race war. So completely different is each character, in tone and manner, that we’ve often forgotten we’re watching the same actress.

In Season 1’s disturbing finale, Dormer got to shine — blaze, really — in all four roles. First, she set fire to Pachuco badass Rio, urging patrons of the Crimson Cat to rise up before they, like comrade Diego, were put down. So passionately did she call for vengeance, you could almost feel her portrayer’s blood boil beneath her skin. Then, in a heartbeat, she turned ice-cold, stabbing lover Rico for standing in her way. “This isn’t a time for peacemakers, mi amor,” she said, Dormer twisting her lip along with the knife.

Next, the quadruple threat disappeared into Alex, the twitchy frump who allows boss Townsend to think he’s pulling the strings… from which she, of course, has hung him. In this small scene, the actress spoke volumes about Alex’s true nature with nothing but a facial tic that resembled a sneer. Before the hour was over, Dormer also submerged herself in German expat Elsa, playing like a fiddle the besotted doctor that she was determined to turn into a Nazi. “Your country needs you,” she said, her doe eyes issuing orders disguised as pleas. “Your family needs you. I need you.” It was a perfect illustration of what Dormer had done with the part all season, toeing the line between pitiable and forceful to achieve her horrific ends.

Finally, Dormer showed us once more Magda’s true self, a malevolent presence whispering into protagonist Tiago’s ear like a bad idea trying to embed itself in his head. In all four roles, Dormer was remarkable; that she managed to make each one distinct — and distinctly diabolical — was nothing short of amazing.

HONORABLE MENTION | We were already making a mental note to spotlight Paapa Essiedu’s work in Monday’s I May Destroy You when the 180 that he performed in the episode’s harrowing final moments bumped him from the Oughta Single Out category to the Need to Single Out one. Opposite suitor Damon, the actor played his sexually adventurous character as cocksure and flirtatious, the embodiment of a heat-seeking missile. That swagger remained on display as Kwame hooked up with Malik to put on a show for Damon… who bailed early on. And that would’ve been enough to merit Essiedu an Honorable Mention; he was that saucy and irresistible. But then, as Kwame started out, Malik forced him back down on the bed and, Essiedu’s eyes widening in horror, raped him. In the aftermath, Essiedu showed us a Kwame that we’d never before seen, a shadow shaking where only hours earlier had stood a confident man. 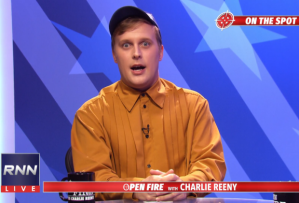 HONORABLE MENTION | Considering Search Party‘s world of self-entitled narcissists, it speaks volumes that John Early can play the Head Egomaniac, yet still make his character insanely likable. In the sixth episode of Season 3, Early showcases his immense talent when Elliot appears on a conservative talk show to discuss his friends’ murder trial. Elliot’s utter shock at being exposed by the host as a failed author and murder accomplice leads to an uproarious on-air explosion full of dirt-slinging and name-calling. It’s a tennis match of slurs that puts Early’s impeccable comedic timing and high energy on full display. When the camera turns off, the attention seeker exclaims, “That was the most fun I’ve ever had in my life!” before he and the host praise each other for being geniuses. Though Elliot’s probably not someone we’d want to hang with in real life, Early never fails to deliver levity and absurdity that are just as fabulous as he is. 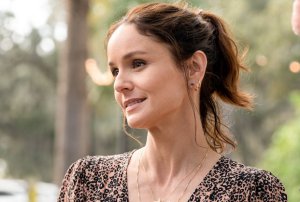 HONORABLE MENTION | As NBC’s Council of Dads drew to a close, Sarah Wayne Callies, as Robin, had opportunity to recap the family drama’s themes. After surveying the storm damage done to the Perry home, Robin “spoke” to her late husband Scott (Tom Everett Scott), noting that while their kids would not react well to this loss, when all was said and done it was “just stuff.” Robin then recapped how Scott’s Council was at first “hard” to embrace, yet ultimately essential. Callies’ eyes then opened wide as Robin tallied the great love in her life one year after Scott’s passing, from their five kids, extended family and more. On that “more” front, Callies darted her eyes to the ground for a moment, before Robin sheepishly shared that she had met someone she liked… and might even love. But Scott, she avowed, will always be the love of her life. And with that, in the same back yard where the series opened, Robin closed an emotional loop.