Warning: The following contains spoilers for the Season 1 finale of Penny Dreadful: City of Angels — the kind of spoilers that fit neatly in body bags. If you’d rather watch the episode before reading the eulogies, hit the bricks.

Horrifying is the only word that comes close to describing the season finale of Showtime’s sublime Penny Dreadful: City of Angels (and after last week’s lynching, that’s really saying something). From the race riot that Magda set in motion to its effect on you-know-who stand-in Townsend and reluctant Nazi Peter, from the bad, bad thing that Lewis did for the sake of the greater good to the murder confession that splattered even more blood on the killer’s hands, the hour was… yeah, there’s no other word for it. Horrifying. Read on if you dare, and we’ll go over every brutal twist. 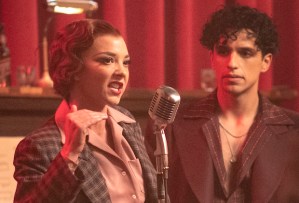 ‘YOU ARE PACHUCO NOW, EVERY ONE OF YOU!’ | As “Day of the Dead” began, Lewis arrived at the Crimson Cat to warn Tiago that Diego had been murdered by their fellow cops. “When news gets out,” Michener said, “this place is gonna go ape.” So the older detective would spirit away Molly while his baby-faced partner rushed his family home. Alas, before Tiago could get Mateo out, word of Diego’s fate reached the Cat. Despite Rio’s best efforts to incite a riot, Rico managed to talk the crowd down. “We fight back now, what happens?” he asked. “You end up dead or in a cell for the rest of your life.” Instead, they’d walk together to take down Diego from the pole on which he’d been hung and show the city what they really are: familia. And, for a hot minute, everything went according to Rico’s plan. The worst that happened was that traffic was blocked while the mourners flooded the streets. Then… oh s–t!

When Rio neared the car in which Peter was driving home his boys, Elsa and Frank, the two versions of Magda exchanged a glance, and out of nowhere, Frank screamed, startling Dr. Craft so badly that he hit the accelerator and accidentally pinned a mourner to the car in front of them! “They’re running us down!” cried Rio. “They’re killing us!” With that, the funeral procession turned into a full-on riot, an epic — and epically disturbing — scene that came to involve sailors spilling out of bars and entering the fray, and a shattered window embedding a shard of glass in Tom’s forehead. During the confusion, Rio stole a moment alone with Rico — to fatally stab him and say, “This isn’t the time for peace, mi amor.” Though Mateo witnessed the murder, he didn’t seem too fussed about the fact that their throuple was now down a lover. “The king is dead,” said Magda, handing him the knife. “Long live the king.” When at last Tiago caught up with his younger sibling, the detective had to be saved from seamen by Mateo and Rio, who went so far as to gouge out a sailor’s eyes. Then, before taking off with the she-demon, Mateo said, “Goodbye, brother,” in a way that let him know — or certainly suggested to us — that they probably wouldn’t speak again. 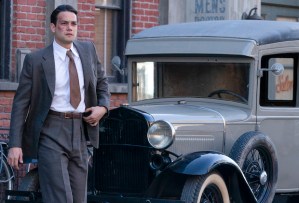 ‘THE FUTURE BELONGS TO BIG, FAT MEN, HONEY’ | The following day, as martial law was declared and tanks began rolling down the streets of Los Angeles, Molly tried to distract Tiago with anecdotes about how she’d always wanted a sister. That, and a bunk bed. In response, he picked a fight. They had no future, he argued. And if she didn’t believe that, then all they had to do was go outside his apartment and hold hands — that would show her. “This town will never leave us alone.” Then let’s go somewhere else, she suggested. Anywhere else. At the Cat with his family, she’d felt for the first time like she’d managed to banish Sister Molly. What about all the good that came from her being Sister Molly? At the end of the day, she had to save herself, she sighed. The double life that she was living was killing her. At last, he relented. “So we disappear,” he said, embracing her for what he couldn’t have known (but we kinda suspected) would be the last time.

Meanwhile, Charlton celebrated the riot and what it meant — goodbye, Belvedere Heights; hello, motorway! Next, he’d take out Bunker Hill, and so what if the Italians rioted? “It only gets me more white votes,” he told Alex, adding that he could already picture the word “mayor” in front of his name. “When I’m in power, heads are gonna roll,” he declared, sounding with every syllable more like a certain modern-day political figure. “Newspapers we don’t like, we’ll freeze ‘em out or close ‘em down.” Needless to say, Magda’s dowdy alter ego was delighted. At the Craft home, Peter comforted Tom but made clear that the boy didn’t hate anyone, even the person who’d hurt him. “You let hatred into your heart, and it is like a hungry rat,” Dad explained. “It devours everything else until there is no love for anything or anyone. And then… then you are lost.” 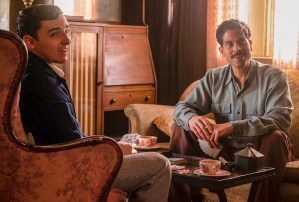 ‘WHO DOESNT LIKE MOLÉ?’ | Downstairs, Elsa reminded Peter that he’d have to make a statement from the Bund as to its intentions. Come again? “Don’t play the ingenue,” she all but hissed at her lover. “We stand on the side of the Aryans, or we stand on the side of the mongrels.” When Peter protested anew that he wasn’t a Nazi, she played him like a fiddle, spinning a yarn about how she’d whored herself out for food after the war. “You taught me to raise my head, and laugh, and be proud,” she lied. “Peter Krupp, your country needs you. Your family needs you. I need you to be who you truly are.” Oy — and then she raised her arm and said, “Heil Hitler.” However hard we might’ve hoped that Peter would tell the she-demon to go to hell, he instead privately took out a Nazi pin and, pained as he clearly was to do so, mimicked her gesture.

In Belvedere Heights, Tiago was perturbed to discover that Lewis had had Benny and his goons stash Brian at his family’s house. “Are you planning on living here now, cooking for my mama?” the young detective asked the apron-clad mobster. No, Brian was going to be driven to Mexico, then flown for safekeeping to New York, where “Mr. Lansky” would look after him. “No one f–ks with those mean Jews,” said Lewis. At the same time, Kurt was suggesting to Goss that maybe the MIA brainiac had been hidden… well, exactly where he was. So off the boss man sent him to retrieve to the boy — with a pulse, he hastened to add. And the rest? “Enjoy yourself,” said Goss. At the temple, Molly broke it to her mother that she was running away with Tiago after that evening’s show. Puh-lease, Adelaide might as well have responded. When guilt alone didn’t change Molly’s mind, the dragon mother revealed that, when Hazlet had threatened his lover’s reputation and ministry, Adelaide had become “God’s righteous minister of death.” Say what now, Ma?

‘THE LORD WILL ALWAYS PROVIDE A STRONG RIGHT ARM’ | Yup, Adelaide was responsible for the murders of Hazlet and his family. “Oh child, I made him go away,” she told a stricken Molly. “I had help, though. An old lady like me needs help.” (Goss and Kurt, no doubt.) Bummer about the wife and kids, but hey, “we’ll hear no more talk about you going away,” Adelaide concluded. How right she was. Beside herself, Molly waded into the baptism pool, where she was greeted by Santa Muerte. “Sister, do you want the top bunk or the bottom?” asked the spirit. By the time Adelaide and her henchman found Molly, she was long dead, the pool as full of blood as water. After Benny, Lewis and Tiago set off with Brian, he revealed that he was working on “something pretty slick” — an atomic bomb. And the more he talked about what it could do, the more he dug his own grave. Eventually, Lewis pulled over to pee, walked Brian out onto the beach and fired a shot that ended every apocalyptic thought in the kid’s twisted head. (Of note, Kurt, who’d been tailing the gang, saw the flare from the gunfire.)

Later, while the Nazi fighters were gassing up, Lewis heard news of Molly’s death over the radio and broke it to Tiago, who did his best not to crumble. Later, tears still wet in his eyes, he joined his family at his father’s grave to drink, dance and pray on the night of Día de Muertos. When everyone else had left, Magda appeared behind him to recite an abridged version of her vicious John Logan speech from the premiere. “Are you ready,” she concluded, “Tiago Vega?” The next day, as Belvedere Heights began being demolished, Lewis marveled that “all of this was about a damn freeway.” No, dude, Tiago replied. “It’s not just a freeway. It’s population control. If you cut off the Chicanos with a barrier of concrete and steel, you put them in the ghetto. And then you put up another freeway around the coloreds and then the Jews and then the Chinese.” As if it wasn’t clear enough, Tiago added, “They’re not building roads, they’re building walls. This is not the United States of America.” Chills. What did you think of the finale? Grade it in the poll below, then hit the comments with your hopes for Season 2.