It’s in the prologue of Sunday’s premiere of Penny Dreadful: City of Angels that shapeshifting demon Magda (Natalie Dorman) asks what could pass for a rhetorical question: “Are you ready?” Of course we are. From the moment it was announced, we’ve been ready to dive into John Logan’s “spiritual descendant” of his sublime original Showtime series. But could City of Angels possibly live up to the promise of its bloodline? Would we be drawn in as quickly and deeply by Magda, her accomplices and opponents, as we were Vanessa Ives and the Creature? After you’ve checked out TVLine’s review, read on. First, we’ll unpack “Santa Muerte,” then you can debate it out in the comments. 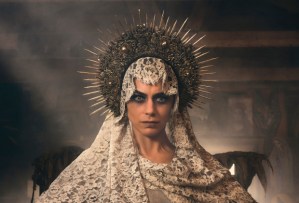 ‘WELCOME TO HOMICIDE, DETECTIVE VEGA’ | In a prologue that was as gorgeous as it was unsettling, Magda informed her sister, the angel of death Santa Muerte (Lorenza Izzo), that “there will come a time when the world is ready for me, when nation will battle nation, when race will devour race, when brother will kill brother… until not a soul is left.” Yeah, Magda’s a real life-of-the-party type. “A leader will arise and set all the kingdoms to war,” added Debbie Downer. To get the fire lit, “all it will take is one final spark.” Clearly, Magda had the power to strike that match, too; she was, after all, about to send an entire field full of Mexican-American laborers up in flames merely by walking through it. Which didn’t seem to faze Santa Muerte — more souls for her to escort to heaven. But she did want her sister to leave be one boy in particular. In fact, when the youngster’s father was being burned up, Santa Muerte went so far as to repel him, leaving on his shoulder a mark that he still had as an adult. When we flashed forward to 1938, we learned that that kid had grown up to be Tiago Vega (Fear the Walking Dead’s Daniel Zovatto), who’d just become the LAPD’s first Mexican-American detective (and might turn out to be humanity’s answer to a fire extinguisher).

At a family party celebrating Tiago’s achievement, there was cake and beer and… tension. So. Much. Tension. Vega matriarch Maria (Adriana Barraza) was painfully aware that on Monday, bulldozers would roll in advance of construction on a freeway that would bisect her kitchen and ultimately destroy their whole community. And the oldest of her four children, Raul (Adam Rodriguez), not only planned to block that construction by any means necessary, he behaved as if his brother’s accomplishment was borderline traitorous. Maybe not even borderline. Though Tiago wasn’t to start his new job until Monday, he got called in the day before by his partner, veteran cop Lewis Michener ( Nathan Lane), who had been called in by their captain, Vanderhoff ( Brent Spiner). Not because he especially wanted Michener on the case, it turned out, but because he wanted Tiago on it. “This is some spic thing,” Michener deduced when they arrived at the L.A. River and saw a message written in blood in Spanish: “You take our heart, we take yours.” All four victims had had their faces carved to resemble Day of the Dead masks, and their hearts removed. Back at the precinct, Vanderhoff told the detectives that the deceased(s) had been ID’d as James Hazlet and his family, Richie Rich white folks from Beverly Hills. “If this gets out, we’re looking at a race war,” he said. “You don’t know how much I wish those bodies were Mexican.” Oy. 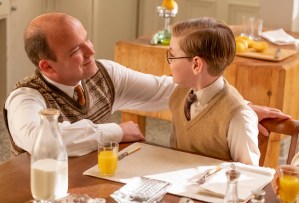 ‘I WANT EVERYBODY TO KNOW I’M CHICANO’ | The next day, Maria arrived for work as the housekeeper of a swanky mansion owned by German expat Peter Craft (erstwhile Creature Rory Kinnear), a pediatrician who spent his lunch hours marching with the pro-Nazi German-American Bund. He was good at it, too, using charm and analogy to dissuade Americans from having any interest whatsoever in what was going on over in Europe. (Vile as the character is, it was nice to see Rory Kinnear not looking cadaverous.) On the flip side, Peter’s home life didn’t seem like it often ended the way that his familiar “America first” speech did — in applause. Wife Linda (Piper Perabo), based on what little we saw of her, had the personality of a hangover. (She was also so fond of the drink that her husband recommended to Maria that, um, “she should not perhaps take any alcohol.” Good luck with that, Maria.) At the office, Peter treated an asthmatic boy named Frank (The Kids Are Alright’s Pat, Santino Barnard). But it was really his mother Elsa (a blonde Magda!) who had his attention. A fellow German, she appealed to him nine ways to Sunday — by complaining about being neighbors with Jews in Boyle Heights, by sharing that her idiotic American husband hurt her and their son, by batting her eyelashes as if she was trying to make little hearts flutter out of them. And he bought it hook, line and sinker. So she was pretty pleased with herself as she stepped into the elevator and, for lack or a better term, absorbed Frank.

While Tiago and Michener were grabbing a bite, the former asked the latter why he’d taken him on as a partner. “‘Cause no one else wanted you,” the older man replied before asking how come Tiago never wore a hat. He wanted his heritage front and center, the newly-minted detective explained. Before they headed to the Hazlet house to look for clues, Tiago added that he’d ask his mother about the makeup/carvings on the victims. In addition to being heavily into the religion based on Santa Muerte and her peers, Maria believed that she was a witch. (And why not?) Later, at the Hazlet mansion, the detectives learned that the family was super-involved in the cultish religion fronted by radio evangelist Sister Molly (Halt and Catch Fire’s Kerry Bishé, whom we didn’t meet here… her pictures were all over the house, though). They also found out that Hazlet was one of the developers working on the freeway that was going to upend his family’s neighborhood. The plot thickens… Meanwhile, at a public hearing about the development at City Hall, Transportation Commissioner Charlton Townsend (Michael Gladis) worked overtime to call to mind a certain someone: He barked that he could, too, throw out the press or “do whatever the hell I want.” And when Raul asked where he and his neighbors were supposed to go when their community was destroyed, Townsend spat, “Where you came from is not a bad answer.” (Need I even mention that Raul was born in L.A.? Didn’t think so.) 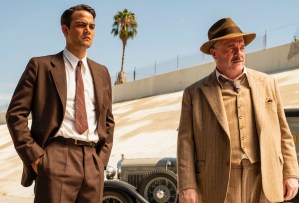 ‘THIS IS OUR HOME, AND WE WILL FIGHT FOR IT!’ | After the hearing descended into a demonstration of police brutality, Townsend retired to his office with his fawning right-hand woman (Magda, this time putting her own spin on Miss Hathaway from The Beverly Hillbillies). Though she stroked his ego raw, he couldn’t resist patting himself on the back, too. He was like Mussolini, he reckoned. Maybe even Hitler. “Now there’s a fellow who understands the judicious exercise of power!” Luckily — for viewers, not him — he’d soon find his swelled head in a vise. A subsequent meeting arranged by his version of Eva Braun with German architect Richard Goss set up Townsend to become mayor. But he would, in effect, become Hitler’s yes man. The Fuhrer looks at L.A., Goss explained, and dreams. When Townsend floated the idea of ratting out Goss and his operatives to the FBI, the architect shared that his limo driver was actually gestapo, and if their conversation didn’t end in a handshake, it was going to end with a gunshot. “I won’t betray my country,” said Townsend with all the conviction I say I don’t want a second glass of wine. “Of course you will,” replied Goss. And he was right. That evening, Tiago asked his mother to let him know if she heard about any crazy black masses or anything in honor of Santa Muerte. And she agreed to be his informant, so long as the boy the angel of death had marked thought about one thing for his mama: “You might need [Santa Muerte] one day,” she said. “What will do you do then?”

After the Vegas shared a delightful mother/son dance at the music store, he encouraged baby brother Mateo to stay away from the construction site on Monday. He’d have tried with Raul, too, but there was no way the activist was sitting this fight out. “You go against the cops, they’ll shoot you down like animals,” Tiago warned. “That’s what you are to them.” In response, Raul asked where his heart was. Ow, bro. The following day, Michener was adding Goss’ photo to his Nazi-centric home crime board when Tiago stopped by to say that he wasn’t going to the construction site, as all the cops had been ordered to. Lemme get this straight, said Michener. “It’s your second day on the job, and you’re not gonna be there” — on the day of what promises to be a race riot. C’mon, dude, he added (minus the “dude”). “In this life, you’re a cowboy or you’re an Indian. You’d better f—ing choose.” That night, Maria managed to conjure up Santa Muerte, who was none too pleased about being awakened. Still, Maria persevered, pleading for her help. In response, Santa Muerte reminded her that she had no heart for the living, only the dead. So “if your leg is in a trap, you must chew it off yourself.” (OK, yeah, now I see the resemblance to Magda.) “Will you sleep,” Maria challenged, “as your bitch of a sister conquers heaven?” At that, Santa Muerte growled and vanished, presumably to get a cup of coffee. Off this unsatisfying exchange, Maria ran to Tiago and basically said, “Tag, you’re Buffy” — in other words, Santa Muerte’s chosen one. So the riot that’s a-brewin’, “you have to stop it, whatever it takes,” she told her son. Or “it all ends in blood.”

‘YOU CAN’T STOP THIS’ | When at last Monday arrived, Tiago walked into a tense standoff between the Mexican-American community and the police. Unfortunately, Magda was also on the scene, walking by the cops like an ill wind blowing softly in their ears. Tiago did his best to defuse the situation. “Shame!” cried Raul. But Tiago persevered, pointing out to his people that hey, they knew him. “I used to play on this street.” Hell, his mother lived just yonder. Nonetheless, “you can’t stop this,” he said. And at that moment, Magda whispered to a young uniformed cop, he pulled the trigger of his rifle, and all hell broke loose. Amid all the chaos, Magda worked her wiles on Raul, and next thing we knew, he was shooting cop after cop after cop. He even winged Michener, forcing Tiago to kill his own brother rather than let him put a fatal bullet in his partner. And if you were wondering what Magda kept saying to her pawns, she informed us (and Santa Muerte) at the beginning of the episode: “All mankind needs to be the monster he truly is, is being told he can.” Dire. So what did you think of the premiere of City of Angels? Grade it in the poll below, then hit the comments with your reviews, observations, criticisms.