It would be wholly understandable if fans of Showtime’s original Penny Dreadful approached its “spiritual descendant” City of Angels with as much trepidation as excitement. How, we might wonder, could any offspring of John Logan’s beloved monster mash live up to the awful beauty of its parent? How could any new characters compare to the likes of Miss Vanessa Ives and the Creature? How could the Los Angeles of 1938 cast enough shadows to frighten us the way that the London of 1891 did? Well… ?

Having screened the first six episodes of City of Angels (which premieres Sunday, April 26, at 10/9c), I now think we were — or at least I was — asking the wrong questions. The new series has in common with its predecessor only a supernatural element, enviable production values and Logan’s trademark dialogue, bleak poetry hung in the air like the silken strands of a spiderweb. It isn’t in any way trying to copy or immortalize its forebear. So the most germane question to ask isn’t “Is it as good as the original?” but “Is it good, period?” Thankfully, the answer is a resounding yes. 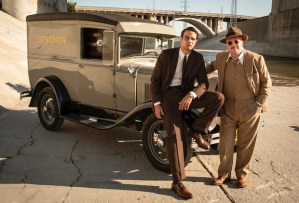 With injustice and racial tension as dense as smog over L.A., City of Angels all but crackles with danger; every step feels like one closer to a landmine. Facing the threat day in and day out, even as it creeps ever closer to his literal home, is the series’ beating heart, the LAPD’s first Latinx detective Tiago Vega (Fear the Walking Dead alum Daniel Zovatto, making the absolute most of the rich material) and his seen-it-all partner Lewis Michener (Nathan Lane, who admirably enables us to forget we’re watching Nathan Lane). They’re a solid yin/yang team, the kind of odd couple that you might bet on to keep the powder keg from blowing, were it not for two things.

One, L.A. is lousy with Nazis, both the kind that work behind closed doors to further Hitler’s chilling agenda and those — like mild-mannered pediatrician Peter Craft (played by the erstwhile John Clare, Rory Kinnear) — that operate in the open, cheerfully suggesting that Angelenos put America first and, you know, pay no attention to what’s going on all the way over there in Germany. Two, pulling unseen strings — and attaching new ones where there weren’t any — is the least sympathetic of puppetmasters, Magda (Games of Thrones vet Natalie Dormer), a shapeshifting demon who passes through plotlines like a virus. (Dormer is, as you’d expect, terrific, vanishing so completely into her myriad alter egos that it would be easy to forget that they’re all the same villainess.)

As angels and devils alternate roles, the plot thickening to the consistency of cement, we’re also given a front-row seat to a romance so doomed, it’ll make you weep before it’s even begun, the occasional dance number — yes, dance number! — that plays like a joyful promise made to be broken, and cinematography gorgeous enough to convince you that you’ve glimpsed heaven (and, for that matter, hell). Simply put, City of Angels isn’t merely good, it’s divine.

THE TVLINE BOTTOM LINE: Whether you tune in to City of Angels longing for the original Penny Dreadful, you’ll quickly realize that the new series is its own magnificent beast, as beguiling and brutal as temptation itself.