Warning: The following contains spoilers for Tuesday’s Greenleaf. If you’d rather be surprised when you watch, we pray you’ll heed our advice and exit this recap now.

Since the final season premiere of Greenleaf had ended with AJ’s suicide attempt, we knew that there was at least a 50/50 chance that the angel of death would be making a guest appearance in Tuesday’s episode. But we never in a million years would have predicted that, instead of Grace’s son meeting his maker, we’d learn that Basie Skanks had gone on to that great pulpit in the sky. What in heaven’s name? Read on… 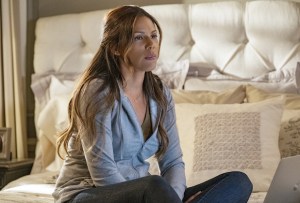 ‘THEY JUST NEED TO GET A ROOM AND MOVE THERE’ | As “The Second Day” began, an exhausted Grace was told at Memphis General that AJ was stable but being held for 72 hours. Psych evaluation and all that. Once his sedation wore off, he could decide for himself whether he wanted to see her or father Noah, who was at that very moment winging his way to town. Upon returning to the Greenleaf Estate, Grace gave the keys to Mavis’ club to Bishop and Lady Mae, who’d resumed her fast in light of recent developments (and, desperately in need of a Snickers, hadn’t lightened up on daughter Judas Charity in the slightest). When Bishop pressed Lady Mae to set a new date for their wedding, she chose Flag Day, the most romantic of all possible options. Wait, what?

Meanwhile, Jacob’s search of Mac’s storage unit yielded nothing. Well, except for a tackle box and fishing rod. When he arrived home, he and Kerissa discussed their appointment in front of Zora as if the girl didn’t have ears. No dummy, she deduced in a heartbeat that “this meeting isn’t about therapy, is it?” Yeah, no. After Darius called Grace to let her know that H&H pastor Cal Weaver wouldn’t speak to him for his article, the two of them showed up on the guy’s doorstep. “Bob knows all about this story,” Cal informed them, “and he’s told [all the pastors involved in the merger] not to talk.” Huh, said Grace and Darius’ expressions. What was Bob up to? Before Grace headed back to to the hospital to meet Noah, she reassured Darius that, although her babydaddy’s wife had kicked him out, she hadn’t reunited with her ex. 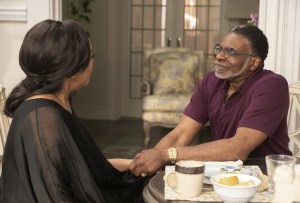 ‘NOTHING SAYS CHURCH LIKE A BAR’ | At Mavis’ club, Lady Mae balked at the idea of turning “this den of iniquity” into her and Bishop’s new church. They’d have to demolish it and rebuild from scratch. In that case, Bishop noted, they’d have to tell Mavis. So be it, Lady Mae replied. “Gut it, start fresh, or I’m out.” When Charity arrived at work, she was chagrinned to see that her office was being painted — for its new occupant, Judee. To Charity’s credit, she bit her tongue for as long as she could around her nemesis, then finally snapped, “You know, Judee, [Phil’s] only marrying you because your father is making him. He’s still in love with me.” In response, Judee paraphrased Proverbs 12:16: “The prudent woman ignores an insult and moves the F on.”

When Grace and Noah reunited at the hospital, she reacted to his long embrace as awkwardly as I’m pretty sure I’m destined to any hug if it’s ever safe again to stop social-distancing. And the weirdness didn’t end there. The way he remarked that he wanted to stick around to “see how this situation unfolds” strongly suggested that he meant “this situation” with her as much as their son. Speaking of whom… AJ didn’t want to see either of them. Elsewhere, Sophia asked Zora for the playlist she’d given her when she was in the hospital (to give it to AJ). When Zora was snippish with her, Sophia blurted out, “Hey, I just lost my virginity to a guy who three days later is contemplating getting back together with his ex-girlfriend. Cut me some slack.” Shocked that Sophia and Roberto had never, you know, she deadpanned, “We should talk more often.” At last it seemed like the cousins were becoming friends again.

‘YOU AND MAMA DESERVE EACH OTHER’ | As Grace and Noah left the hospital, he asked if they could talk that night. About? “AJ… you and me… us,” he said. “I want us to be a family.” While she was glad that he wanted to be involved in his son’s life, family wasn’t, as he made it sound, “something that you pick up on the way home.” He then made matters worse — So. Much. Worse. — by commenting on her usual m.o. If her walls hadn’t been up before, they for sure were at that point! After Grace returned to the Greenleaf Estate, Charity asked her and their mother what she could do to get out of the doghouse. And apparently, short of becoming a cat, there was nothing. Nearby, Zora “thanked” her parents for letting her know about the divorce and laid the blame squarely at her father’s feet. When Jacob threatened to tell her the truth, Kerissa did the same thing she had to get him to give her primary custody of their son: She dangled the telltale will in front of his eyes. At least metaphorically.

Once more, Charity reached out to Grace, offering her a heartfelt poem that she’d written to daughter Eden after being told that, while Nathan would be OK, her baby girl might not be. Grace was… how to put this… unmoved. “How in the hell can you turn my son’s attempted suicide around,” Grace spat, “and make it all about you?” As the hour drew to a close, though Bishop hadn’t been able to reach Mavis, he informed Lady Mae that he’d called a contractor. Now, could they please set a wedding date? Uh-oh. He had, at least momentarily, forgotten that they’d done so earlier that very day. (At least his slippage prompted Lady Mae to abandon her fast; she’d need strength in the days ahead, she reasoned.) 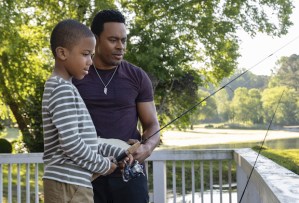 After Sophia called Dante and got Nikki instead — “Bye, Felicia,” said the other girl (the Felicia implied, not spoken) — she learned from Zora that, oh hell no, a topless picture she’d sent him had been posted on the Internet. Grace received a top-secret off-the-record call from Cal Weaver that amounted to three words, the name of a company: Eden Vale Lending. Mmkaaaay. And while Jacob was fishing with his son, he discovered in the tackle box… whad’ya know? Mrs. Davis’ original will, which lists the beneficiary as… Darryl James! Cut to: Jacob telling Tasha that he has to find Basie. Has he tried the cemetery? Basie, she revealed, was dead! So, what did you think of “The Second Day”? What do you make of Bishop’s memory loss? Jacob’s discovery? Noah’s renewed interest in Grace? Hit the comments.