Warning: The following contains spoilers for the fifth and final season premiere of OWN’s Greenleaf. If you’d rather watch first, read later, we pray you’ll heed our advice and exit this recap now (or forever hold your peace).

Don’t bother asking if Greenleaf can get an amen. After Tuesday’s Season 5 premiere, I’m pretty sure we’d all give it not only one of those but an hallelujah and a couple of oh-my-Gods to boot. In the span of an hour, the OWN soap delivered what we were told was “basically a miracle,” revealed who was trying to do “the most cynical thing ever,” sent us speeding toward a new beginning and a new church for Lady Mae and Bishop, and dealt Grace a blow from which she might never recover. And that’s just the highlights. Read on, and we’ll go over everything that made “The First Day” one to remember. 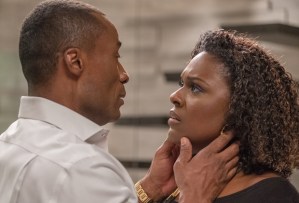 ‘HE’S PASSING OUT WILLS AND CHLAMYDIA — GREAT!’ | As the episode began, Bishop and Grace watched as Hope & Harmony packed Calvary into a moving van with all the care that a dorm room might get. “It’s better to be there when something passes away,” he insisted to his daughter. Otherwise, one might miss seeing what God has up his sleeve next. But even he couldn’t take seeing the cross hauled off like a hand-me-down futon. “Maybe,” he admitted, “this was a mistake.” Praise be; he’d seen the light! At the Calvary office, Phil approached Charity — or “Lady Benedictine Arnold” as her mother had taken to calling her — to ensure before their first joint meeting with the board that they were cool. Oh, they weren’t just cool, she replied. They were ice-cold. “My family hates me. I have no love life. This job, which you were kind enough to grant me after you dumped me like a bag of s–t in the trash, is literally all I have left on this earth.” So yes, Phil, when they walked into that meeting, they’d put up a united front — because they’d be united, and it would sure as hell be a front!

Meanwhile, Kerissa warned Jacob that “if you don’t take care of me in this divorce like no woman in the state of Tennessee has ever been taken care of,” she’d expose his parents’ (possible) involvement in the demise of their mansion’s previous owner. At the same time, Aaron was dropping by the lavish home in question to inform Grace and AJ that something had occurred that was “basically a miracle”: Another guy had been blamed for the crime that AJ had committed. What’s more, he’d conveniently died in a shootout. So AJ was in the clear. Who was the guy? Jesus, take the wheel — it was the fella that Grace had seen at Faith’s gravesite in Season 4’s finale! Needless to say, she was shook. As Aaron left, Jacob pulled the lawyer aside to show him Mrs. Davis’ will — and Mac’s signature on it. Did it, as Kerissa maintained, prove that his folks had done something shady? Not necessarily, Aaron said. But it would sure help if he could lay eyes on the will that this one superseded. “Hey Siri,” Jacob said, “call Joyce Meyer,” aka ex-mistress Alexa. 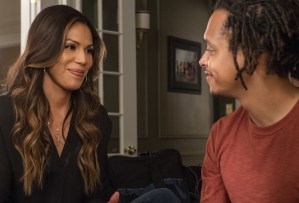 ‘NOTHING ENDS THAT QUICKLY’ | Beyond curious about the man who’d died so that AJ could get off the hook, Grace paid a surprise visit to Darius at his office. “I need a favor,” she said, “and I wasn’t sure you would see me if I called first.” Oh, if she’d gotten a gander at the size of the torch he still carried for her, she would’ve been! Anyway, his heart beating on his sleeve, Darius of course agreed to look into the identity of the John Doh with whom she’d become fixated. Back at Calvary HQ, Charity made it clear during the board meeting that, until Phil’s “great white ho” turned the congregation vanilla, she’d be playing Little Bo Peep to the flock. Still, her no-good, very-bad day just kept getting worse: Carlton announced that he’d sooner hit a flat note than serve up “Pinkberry hymns,” so he was quitting as choir director. “I just wish I could quit, too,” Charity admitted.

At Alexa’s, Mac’s former assistant read Jacob for filth about the way that he’d gotten her canned and tossed out of not one but two churches. Oh, and no, her little girl wasn’t his, she hastened to add. “I wouldn’t have kept yours.” Ouch. Finally, Alexa admitted that her old boss had a s–t-ton of paperwork in a storage locker; maybe the documents Jacob was looking for were in there. Back at Greenleaf mansion, though Grace encouraged AJ to accept the easy — well, God’s — way out of the trouble that he’d been in, he still felt guilty about the fall guy’s fate. In the end, AJ agreed to go out with his family that night to celebrate his freedom, but as soon as his mother left his room, he looked ready to bolt — at least until he caught a glimpse of himself in the mirror. If a guilty conscience had a face, his was it. In other developments, Sophia showed up at Dante’s for a date, only to find Nikki there. “I’m hurt,” she admitted, “but I’m not mad.” Pretty mature, really — she left the exes there to unpack their baggage and figure out whether they were reuniting.

‘WE NEED TO START A BRAND-NEW CHURCH’ | After meeting with members of Calvary’s board — the consensus: “I’m not going to church in a gym” while the new one’s constructed — Bishop floated an idea by a wary Lady Mae: Could they take one step at a time toward… a new church? He’d been inspired, he explained, by seeing what she could do at the pulpit. So why couldn’t they just start over… with step No. 1 being them getting remarried (and ending her damn fast already!)? She called him crazy — “At my age,” he corrected her, “the word is ‘demented’” — but she was in. She’d wanted a sign from God. “Well, how’s that for a sign?” While the former marrieds were making plans to take the “former” out of that description that very day, Charity was dropping by Phil’s to return his engagement ring. Aw, come on, he said. She knew how he felt about her. “I don’t know how you feel about oxygen,” she shot back. At last, he confessed that if he didn’t marry Judee, Bob would yank the job for which he’d worked 20 years. He didn’t know how to let that go. “But you know how to let me go,” she pointed out. Bye, Phil.

As the hour neared its conclusion, Darius met again with Grace to reveal what he’d discovered about Bob and why he’d been so keen on getting his mitts on Calvary: It appeared that he was planning to run for Senate as a Republican who just happened to have a church in his lapel pocket. “It’s a good plan,” Grace acknowledged. “It’s the most cynical thing ever,” replied Darius. I’d have sworn that this sharing of intel was going to draw them into a kiss, but before they could, Grace got a call: Her parents were getting remarried — that afternoon! As the Greenleafs (Greenleaves?) gathered at the mansion to head off to the nuptials, Sophia reported that she’d looked for AJ, but he hadn’t been in his room. Investigating, Grace discovered her son — aw, shades of Faith! — on the floor of his bathroom with his wrists slit!

Heaven help us, that was a helluva premiere, no? Do you think AJ will live? Do you hope he will? Sound off in the comments below after grading “The First Day” in the poll below.