Warning: The following contains spoilers for Sunday’s Yellowstone. If you’d prefer to watch first, read later, giddy-up… up and away.

All together now, Yellowstone fans: Oh, Jamie. On what could only have been what, his second day on the job as Livestock Commissioner, the series’ resident Meg Griffin so completely and totally botched it that he wound up bringing about a double murder. “How?” you ask. “How on Earth?” Read on, and I’ll do my best to explain without rattling my brain from shaking my head so hard. 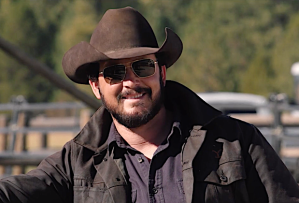 ‘ALL WE DO IS FISH AND EAT AND FISH AND EAT’ | As “Freight Trains and Monsters” got underway, Tate awakened at summer camp from his first good night’s sleep since his abduction, and a hungover Beth rolled out of Rip’s bed to delight — absolutely delight — in the sight of him making her breakfast. (And the way he relaxed her, so that she wouldn’t feel self-conscious about eating in front of him… that s–t was as intimate as any love scene you’ll see this year.) Meanwhile, Jamie arrived for work at the Livestock Commission ready and raring to screw up the opportunity in epic fashion. And in about three… no, two… no, immediately, he did just that. When the local law called about a pair of horse’s asses who’d beat up a coupla female barrel riders to rob ’em blind, Jamie jumped at the chance to make influential friends by handling it (cough, cough) “the right way.” Send in Agent Hendon, Jamie told secretary Helen. And things went downhill from there. 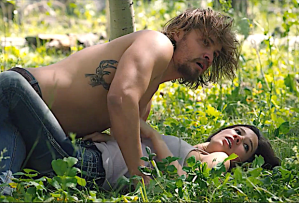 After riding out to summer camp to check on Tate, Monica found Kayce wolf-tracking. But no sooner had she given him something better to, ahem, point his gun at than who should show up but the wolf in question! What do we do? asked Monica, sensible as ever. “If he wants to watch,” her husband told her, “just let him watch.” And apparently, the four-legged voyeur did wanna eyeball their tryst, the dirty dog. Back at the camp, Rip offered John the manliest of thank-yous — and not for the house, either, for the Dutton patriarch’s heartfelt letter. “Nobody’s ever given me anything like that before,” Rip said. After some chitchat — sorry, I mean, manly discourse — about how they’d soon be short of hands, Rip implied that he might hire another cowgirl. The last one, having been a drifter, had drifted. But she hadn’t been the bunkhouse train wreck that John imagined. Still, “if you hire another girl,” said John, “she needs to be mean or ugly, one of the two!” 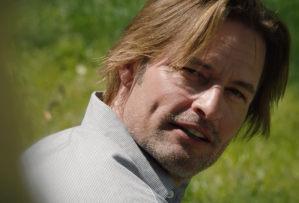 ‘IT’S LIKE LUCILLE BALL AND FABIO HAD A KID’ | That night, as Kayce and Monica marveled at how well Tate was sleeping at the summer camp, she remarked that she wished they could live like that all the time. OK, Kayce replied. He’d make it happen. It wouldn’t be easy, though. And she’d have to give up a lot. Duh, Monica said. “Baby, nothing’s easy with you… and I’ve given up all I could.” Later, Kayce sensed that the wolf was near and brokered a deal with the animal to let him have the forest if he left the valley and cattle alone. Rather than say, “Who the hell do you think you are, Dr. Dolittle?” John, because Kayce is the golden child, gave him a gold star and mentioned that his own father was fluent in four-legged, too. Poor Jamie. 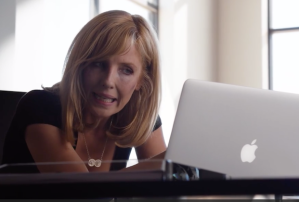 At Schwartz & Meyer, Beth and Bob deduced that Market Equities was going to build an airport… and a ski resort… and a whole city around it. Who’s the BSD over there? she asked. She’d go cut him down to size. Roarke Morris, huh? “Thats not a f–king first name,” she huffed. And then she saw, of course, who Roarke was. Ugh. Her worst nightmare, “and I have to go make a f–king deal with him!” At Cross Creek, when not flirting with Beth over whether “Somebody’s Baby” was Billy Joel or Jackson Browne, Roarke was upfront about Market Equities’ plans. And why not? If she didn’t live there, what would she do with the land? Turn it into Park City, she admitted. Hey, mind the flowers when you drive away, he remarked. So, naturally, Beth left three-inch-deep tire tracks in his garden. “I like this girl,” he laughed to himself. How could he not? 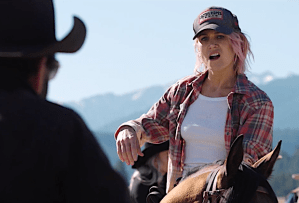 ‘SHE CAN RIDE THE HAIR OFF A HORSE’ | Back at the ranch, Rip held the equivalent of a job fair at which he was particularly impressed by a young woman whose name, he learned by the hardest, owing to her accent, was Teeter (Animal Kingdom alum Jennifer Landon). At the rodeo, the local law told Agent Hendon that the no-account thieves needed to be taught a lesson — and he knew just the lesson to teach them. (Oh, Lord.) So he loaded up the culprits in the victim’s rig, drove them away, then bashed the crap out of them by slamming on the brakes and accelerating over and over (and over and over). By the time Hendon returned to the rodeo — oh, Jamie — the dudes were as dead as Sarah Nguyen.

Back at Yellowstone, Rip was chilling on his porch when he thought he heard a wolf howling. Nah, it was only Beth, drunk in the corral and marveling at how fantastically alone they were at his place. They could do anything they wanted, in fact. What he wanted wasn’t, as she suspected, to “f—k in the dirt,” at least not right away, but to slow-dance with her. (You keep away from her, Roarke Morris, ya hear me!) At the summer camp, Tate’s hankering for extra biscuits prompted John to tell a campfire story about how they’d been Kayce’s favorite, too. His mother had hated making them, though. When John had said, ya know, you don’t have to make the boy biscuits, he’ll eat anything, she’d replied, “But if I don’t make ‘em, I can’t watch him eat ‘em.” With that, she’d gone to bed. Since John left early to brand cattle the following day — her birthday — that turned out to be the last thing she’d ever said to him, he recalled ruefully. Alone with his son, John admitted that he wondered what the point of it all was if you could love someone and lose them. What, he wondered was the plan? “You’re standing on it,” Kayce said. 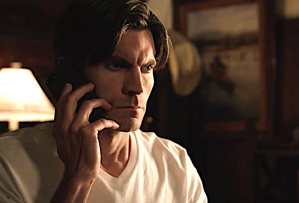 And, in the final seconds of “Freight Trains and Monsters,” Jamie received a collect call from Sweetgrass Valley Jail. Specifically, he received a collect call from Agent Hendon at Sweetgrass Valley Jail. “Is everything OK?” asked Jamie, knowing even as he asked the question that, obviously, everything had to be about as far from OK as it could get (and still destined to get so! Much! Worse!). So, what did you think of the episode? Do you imagine Beth would ever cheat on Rip with Roarke? And is there a limit to how much this show can make us love Beth and Rip together (’cause if there is, I ain’t seeing it!)?