When we check back into The Chi this week, it’s a few days after the events of the Season 3 premiere… and Kiesha still is nowhere to be found.

But Kevin promised not to tell Nina and Dre where his sister was, remember? So even though he’s freaking out at the start of the episode, texting her friends via her computer and wondering if they’ve heard from her, he holds back on telling his mom and new stepmother.

Once Nina kind of realizes what’s going on, she and Dre head to school, figuring that Kiesha won’t miss classes even if she’s avoiding home. But her teachers haven’t seen her, either, and the principal adds that Kiesha has been missing a lot of classes lately — which is news to her folks. Outside, Kev corners Kiesha pal, Malaysia, and eventually gets the name of Kiesha new boyfriend: Nock, who runs with the 63rd Street Mob.

When the cops dismiss Nina’s worries, saying that Kiesha is probably shacking up with a guy, Dre decides to take action. She uses Kiesha laptop to track the girl’s phone (side note: WHY DID NO ONE DO THIS EARLIER?) and follows the signal… to the underpass where Ronnie has been living. 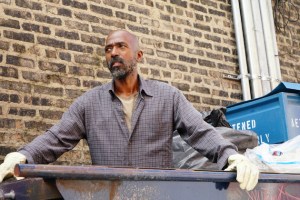 Ronnie plays coy, saying he saw Kiesha at the bus stop that night but he’s got no more info. But Dre won’t accept that, and things get heated until he shakes down one of his neighbors and hands over Kiesha phone. Only problem? It’s busted beyond repair and likely will not help one bit in locating her or figuring out what happened. “If I find out you had something to do with this,” Dre warns Ronnie, “I’m going to come back here and kill you myself.”

So while Nina and Dre talk to the police, who are suddenly far more interested in the case, Kevin enlists Papa and Jake to go with him to knock on Nock’s door. The man who answers the door says Kiesha isn’t there, and pulls a gun on Kev when he tries to push his way in. But the kid is undeterred: He announces he’s not leaving there without his sister.

* When Imani demands to know what went down with Trig and his family, he tells her that his father was a janitor at the mayor’s office who was fired for complaining about the havoc the shutdown of the Cabrini Green homes wrought in his family’s life. His father eventually left them, and his mom started hanging out with drug dealers and got pregnant with Jake.

* Jada tries speed dating but is disappointed at the results. Off a tip from Tiffany, she books an in-home massage with a guy called Suede and they wind up having mutually appreciated sex. Too bad it’s probably just going to be a one-time thing, given the way Suede takes off in a hurry after he runs into Emmett, an old friend, and they both realize what’s just happened.

* Speaking of Emmett, he realizes he’s got to hire an actual chef for his business. So he visits Dom (played by Power‘s La La Anthony), who runs an underground restaurant out of her house and knows how to do amazing things with oxtails and fresh herbs. He talks her into swinging by Sonny’s restaurant at 10 that evening, then he pitches her a vision of the two of them running a late-night eatery out of the kitchen there. She hesitates, then she’s in.

* Trig makes first contact with Jake, who says he’s not interested in moving out of Douda’s house, but he’s cool with Trig wanting to stick around and build a relationship with him. In other Trig news: He and Imani go to a gay bar for a night out, but when a guy hits on him, Trig gets violent. Imani breaks it up and apologizes profusely to the other man, then they leave. On the street outside, Imani tells Trig she likes being around her people every now and then, and he can’t act that way: That’s when it becomes clear that Imani is transgender. “You’re a woman. That’s all I see when I look at you,” Trig says, maintaining that he is not gay. “You can’t love me and hate him,” she tells him. “It doesn’t work like that.”