Warning: This post contains spoilers from the Season 3 finale of Search Party.

Murder, lies, another murder, more lies. It’s been a bumpy road for Search Party‘s Dory and Drew, but did that road ultimately land them behind bars?

Season 3 of the HBO Max dramedy is now available to stream in full, and if you’ve recently caught up with the “trial of the century,” you already know: the pathologically lying Dory and her ex-boyfriend Drew were found not guilty for the murder of private investigator Keith Powell. (Read our finale recap here.) But they’re not completely out of the woods just yet. Not only is the death of neighbor April still hanging over Dory’s head, but her super creepy stalker is, in fact, alive and has captured our curly-haired protagonist (antagonist?) and chained her up in his basement.

Do Dory and Drew deserve empathy? Has Dory absolutely lost her mind? The show’s leads, Alia Shawkat and John Reynolds, weigh in on these and more, plus tease what viewers can expect from the series’ already-filmed fourth season.

TVLINE | It seems not even Drew can tell if Dory’s lost her marbles or is just an expert liar. But Dory’s seeing dead people… so has she gone a little crazy?
SHAWKAT | I think the act of believing your lies is crazy, so… [Laughs] I think she’s decided that this is her only way out. She’s like, “I have to disconnect from everything the old Dory represented, because that’s the only way out of this.” I think she’s in complete denial, even to the point where she won’t let anyone, even herself, face what existed, and it’s so confusing for her friends who are like, “What are you actually talking about?” It’s like denying seeing a color. They’re like, “That’s blue!” and she’s like “No, it’s red!” I think she has kind of lost it, but to her it makes sense because it’s like survival.

TVLINE | John, your character doesn’t believe Dory’s story about April, and has a moment where he hilariously calls everyone psychopaths. How would you describe Drew’s journey this season?
REYNOLDS | I think it’s sort of a constant hell for him. He wants to stick with the group and he doesn’t want to betray them, but morally, he’s dealing with who he is and it’s just boiling and boiling. He wants to be with Dory and he likes the comfort of having her around — and she’s literally the only person he can talk to at this point — but at the same time, she’s losing her mind and he’s struggling.

TVLINE | Dory and Drew are so likable in a lot of ways that it feels like we should root for them, but with all the lying and covering up, do they deserve empathy and freedom?
SHAWKAT | I think it’s part of what makes Search Party interesting. In the first season, they are likable characters. They have faults and they can be annoying, but you’re like, “I still like them.” But the situations get so extreme where you’re like, “These people killed somebody!” Dory killed more than one person! But I think that’s what it’s trying to challenge in a comedic sense. To be able to laugh at how we judge people and how we allow ourselves to feel about people — especially this season with the fame aspect of it — people we don’t know! Dory’s starting to feed the flame and then you start to be like, “Well, whose side am I on?” and that’s part of the game with complex characters. I was re-watching parts of Season 2 with my family, when Drew is trying to convince his co-worker that their boss is sleeping with his wife, and my mom was like, “That’s terrible! That’s awful! I can’t believe he did that!” Yeah, well…
REYNOLDS | He murdered someone as well!
SHAWKAT | Yeah, but he was protecting… and there you go! What I always love about Search Party is that these people who might be despicable, you see so much more about them instead of just hating them. The characters SV [Sarah-Violet Bliss] and Charles [Rogers] created are so despicable, but you kind of see their pain, so all of a sudden you’re like, “Ah, I do care about them. It sucks, but I do.” 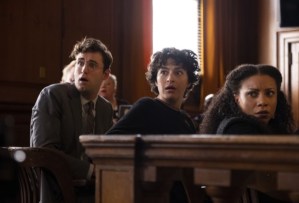 TVLINE | Would you say they’re good people? Bad people… ?
SHAWKAT |  Somewhere in between.
REYNOLDS | It’s hard in this season, too, because you see so much more of the trauma that happened to these characters early in their lives. You get to see everybody’s backstory, like Drew’s first experience murdering an animal, and Elliot and Dory’s families, so now you’re understanding them more, as before they were just sort of like satirical archetypes.

TVLINE | Dory is haunted, literally, by what she did to April. Will that ever go away?
SHAWKAT | I think the haunting of April is her unconscious being like, “You f–king did this and if you don’t face it, it’s going to eat you alive,” so she decides to kill it instead of facing her truth. In the next season, she’s definitely starts to face what’s happened to her, but in this one, that’s when the moment ends. When she’s looking at herself in the mirror, she’s a different person. She’s like, “I completely killed that version of me.”

TVLINE | There was one scene where reporters ask Dory to pose for a picture and she flashes them a smile. Is there a part of Dory that relishes the attention?
SHAWKAT | Oh, for sure. For someone who in the first season felt unseen, and that’s what drove her actions, I think she’s starting to settle into it in a disturbing way. She even starts to dress up more and control the narrative. It’s really sycophantic, but I think she’s starting to enjoy being seen for the first time, no matter how they see her. It’s better than not being seen at all.

TVLINE | Michaela Watkins’ character Polly tells Dory that “today may not be your reckoning, but there will be one.” Will karma eventually catch up with them?
SHAWKAT | We’ve already shot Season 4, so we do know some stuff. I think in maybe not the clearest sense, but karma does come back in a very f–ked up way. Throughout this whole show’s existence, these people are running away, and in these silly and ridiculous ways, trying to escape something and they just can’t. The show started with a girl searching for herself, but you can’t run away from who you are, which is kind of the theme that carries throughout the whole show. You’ve got to face your s–t eventually.
REYNOLDS | I feel like they’re wading in karma constantly. For every small twisted victory, they take five losses, especially Drew. I don’t remember the last time Drew had a good moment. Where he’s like, “This was a good day!”

TVLINE | Portia did the unthinkable in testifying against Dory and Drew, but then ended up helping their case in a major way. Looking ahead to Season 4, is their friendship fully mended?
SHAWKAT | All of our stories as characters are so intertwined at this point that the only way to heal each other is through each other. I wouldn’t say it necessarily mends, but they’re forced to deal with their own demons with each other. It’s too late to be like, “I need to separate myself and work on my shit.” Nope. We gotta do it together. It’s the only way to heal this stuff.

TVLINE | Looking ahead to Season 4, we see Dory’s been captured by her very not dead stalker. Is there anything you can tease about next season?
SHAWKAT |  Without giving too much away, the gang has to find Dory and it just gets even more warped. Season 4 deals with her psyche in a different way. She’s forced to face all this s–t in a very unsettling world. The third season’s theme was fame and attention, and Season 4 definitely has its own themes and a whole other kind of world.
REYNOLDS | I would say that in the earlier seasons, Drew was sort of trying to deal with what was going on and compartmentalizing, and I would say in four, he’s trying to escape. And that’s all I’ll say about that!