For decades, the identity of a rapist and murderer who terrorized California communities was an unsolved mystery. Now, the story of a woman who doggedly tracked him but didn’t live to see his capture is a tragedy. HBO’s I’ll Be Gone in the Dark, which premieres Sunday (10/9c), blends both of those tales in a gripping new docuseries.

The project is part true-crime thriller about the hunt for the Golden State Killer and part captivating memoir of Michelle McNamara, the writer who coined the murderer’s nickname but died before completing the book on which the series is based. In addition — and with a serious assist from the work McNamara and other “citizen sleuths” did on the case — police nabbed Joseph James DeAngelo in April 2018; at a court hearing in late June, DeAngelo is expected to enter a guilty plea for a great number of the crimes ascribed to the Golden State Killer. 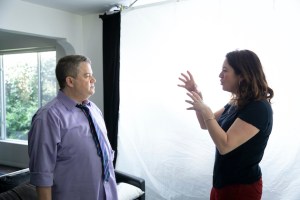 TVLine recently chatted with executive producer/director Liz Garbus (What Happened, Miss Simone?) and McNamara’s husband Patton Oswalt (Veep), who has a steady presence in the series. Read on to hear their thoughts on building a narrative when the narrator is missing, the importance of teamwork and whether or not they plan to watch DeAngelo’s day in court.

TVLINE | I thought I’d watch an episode or two to get a feel for the show… and I got sucked in. I was up way too late last night with the screeners.
OSWALT | Oh wow.
GARBUS | I’m sorry. And now we’re keeping you from napping!
OSWALT | Sorry about that. [Laughs] That’s a testament to Liz’s work.

TVLINE | Let’s jump in. As a reporter, I’m just so impressed with how Michelle kept so many voicemails, emails, texts, all of that type of stuff. Patton, was that always how she’d been? Was she the archivist in your family?
OSWALT | Yes. I mean, not only her: She comes from a long line of archivists who save things. [Laughs] It was amazing. The McNamaras are incredible record-keepers. 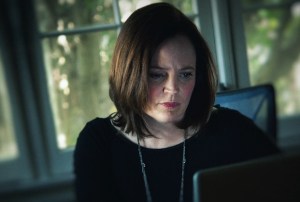 TVLINE | Liz, that must have helped you greatly. When did you realize that was the kind of treasure trove you’d have at your disposal to help craft the narrative?
GARBUS | It took some time — and I have an incredible team working with me. When I first met Patton, when I first spoke to him, HBO gave me the manuscript before the book was published. I knew that, with Michelle’s writing and the stories of these survivors that I hoped I would be able to get —and then, remember, at that point, we didn’t know who did it.

TVLINE | Right.
GARBUS | I knew I could tell a compelling story, combining Michelle’s voice with their stories. Then, when we were able to learn that she would have conversations with her fellow citizen sleuths and with law enforcement and survivors, that really guided the style. Because we then felt like, OK, we want to shoot this in such a way and edit it in such a way that you feel like you’re on the journey with her, as opposed to it being a past-tense telling. 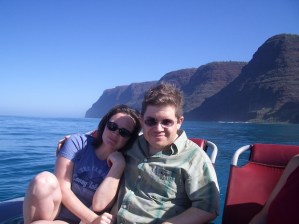 TVLINE | There’s a recurring theme in the series of how Michelle would make these great working relationships with people involved with the case, and how they’d be so impressed by her knowledge and passion for the subject that they’d partner with her. Patton, are you still in touch with anyone who became close to Michelle during her work?
OSWALT | …I still talk with Paul Holes sometimes. And Billy Jensen isn’t a policeman, but he’s another true crime journalist who I’ve maintained a relationship with. [Editor’s note: Jensen helped finish McNamara’s manuscript after her death.] They’re very, very unique and fascinating individuals that are drawn to this line of work, you know? It takes a very amazing spirit to be able to sustain and do that kind of work with all of the psychological risks and everything, you know?

TVLINE | So many of the Golden State Killer’s victims had already told their stories to Michelle — or had never talked at all about what happened to them. Liz, can you speak to how tough it was to get buy-in from the victims?
GARBUS | Depending on the person, it was different, because as you said, some of them were not folks who had come forward before. Some of them are still under pseudonyms in our film. The stigma of rape is, yes, while we’ve advanced since the ’70s, it is still not seen like other violent crimes. There still seems to be some sense that there was agency on the part of the victim. Working with the I’ll Be Gone in the Dark imprimatur, Michelle’s goodwill, that did buy us a lot, I think. The fact that it was HBO, and that I’ve done films in the criminal justice system — probably people felt like they were not going to be reduced to a 45-second sound bite in which you see them only as represented by the worst thing that ever happened to them. [Instead,] you see a journey, and you see full people, and you see it in the social and political context in which it took place. So I think that goes a long way.

TVLINE | I was struck, in one of the episodes, by how disturbed even Michelle was by some crime-scene photos she hadn’t seen before — and she had seen a lot. Talk to me about the decision about which visuals to include.
GARBUS | We talked a lot about it, and there is a lot that we deemed too rough to go in there. There’s lot that Michelle saw that she didn’t want put in her book, and that we didn’t put in the documentary, either.

But I had these dialogues with myself. It’s like, you can’t sugar-coat what happened, This is real, and this is what we’re talking about. But at the same time, we want to not trigger people — and I don’t use that word all the time. I think here it’s appropriate. You want to not hurt a future generation who may be related to one of those victims. So, it’s a constant balancing act. I don’t know what the perfect balance is. I just, I try to balance truth-telling with, you know, moral sensitivity, and I’ll always strive to do that, and I’m sure I’ll make mistakes. But it’s certainly a huge responsibility.
OSWALT | That’s a really good way to put it.

TVLINE | Patton, your daughter, Alice, is a very little girl in some of the footage shown in the series. Knowing how little ones often overhear things when we don’t think they’re listening, was there ever a time you realized she was picking up on the subject matter of Michelle’s work at all?
OSWALT | We made sure that all of Michelle’s crime stuff and files and everything were in another room that Alice could not have access to. We didn’t want her opening a folder and getting into…

TVLINE | Right. Oh God.
OSWALT | [Laughs] Exactly. But there’s that great picture [shown in the series]. Michelle, she’s just checking off a list of names. It’s just names of people. So, Alice would sit next to her with a little notebook like checking, like, “I want to do the data research.” She loved that part of it. Sometimes, Alice will pretend to be a detective, and she’ll question me or [my wife ] Meredith [Salenger] about our movements or what did we do yesterday or people on the phone and stuff. [Laughs] It’s really cute.

TVLINE | Liz, was there anyone that you really wanted to get on camera for an interview and just couldn’t make happen?
GARBUS | One of the things we really wanted to do was explore the Lombardo murder more than we did. [Editor’s note: The murder of Kathleen Lombardo, a neighbor of McNamara’s who was killed when McNamara was 14, is often referenced in the series. Lombardo’s killer still has not been found.] My producer flew and met with the Oak Park police — I think twice, actually — and we filed FOIA requests… They say it’s still an ongoing case, but that was certainly something we wish we could’ve gotten deeper into. I hope maybe little Michelle McNamaras, after seeing this show, will decide to take it on and bring attention, again, to that unsolved crime.
OSWALT | And another thing that I loved that Liz stressed — she doesn’t even stress it. It’s just there in the narrative, and Michelle was also doing this in her work — is really wanting to shatter the myth of the one-person crime solver. It’s a team of people, pooling resources. Even in the police force, it’s a team of people. This one-person crusade is such a dangerous myth. It’s a very, very dangerous myth that’s going to impede cases getting solved. [Ideally,] it’s a group of people getting together and sharing resources, and Michelle very much believed that.

TVLINE | The man believed to be the Golden State Killer, Joseph James DeAngelo, is going to appear in court at the end of the month. The proceedings will be streamed on a private YouTube link. Is that something that either of you want to/have the ability to watch?
GARBUS | I would like to try to watch if I can. I’m invested in what happens for the survivors, you know? I’m invested in how that goes for them.
OSWALT | I keep going back and forth on this. Someone asked me this earlier, and I said I wouldn’t be. Now, I don’t know. I know that Michelle did the work in the investigation, but it just feels like more her world than mine. One thing I am happy about is I know that the survivors and victims will be there to look at him and have him not meet their gaze, which they have not been able to do yet.