Lucifer will meet his father from another universe (in a manner of speaking) when Rob Benedict guest-stars in a Season 5 episode.

TVLine has learned exclusively that Benedict, who has recurred on Supernatural over the years as God (aka Chuck Shurley), will appear during Season 5 as Vincent Le Mec, a hardened French Mercenary whose violent work brings him to Los Angeles — and into the crosshairs of Lucifer, Chloe and the LAPD.

The first half of Lucifer Season 5 was recently announced to premiere on Netflix Friday, Aug. 21. Benedict’s appearance, which was filmed just before the pandemic-dictated shutdown, comes in the 15th episode — meaning, part the yet-to-be-scheduled Season “5B.” (Filed Under ‘Fun With Family’: Benedict visited the Lucifer set ahead of his guest spot, where he posed with “my two sons,” series lead Tom Ellis and director Richard Speight Jr., who on Supernatural plays the angel Gabriel.)

Check out a photo of Benedict on-set with Ellis and co-showrunner Ildy Modrovich: 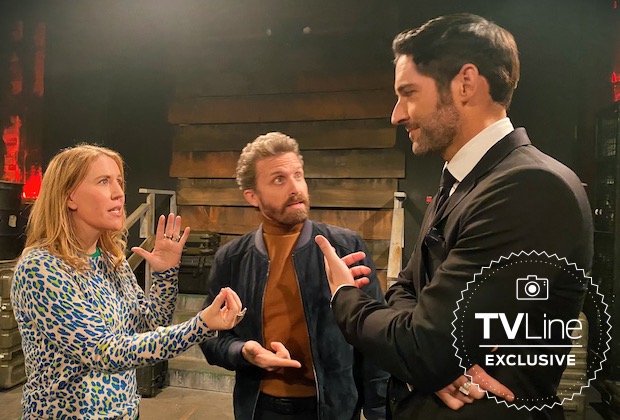 Season 5’s other guest castings, it should be noted, include 24 POTUS Dennis Haysbert as Lucifer‘s own God. (You can read about that and learn much more about what’s ahead in TVLine’s Everything We Know About Lucifer Season 5 guide.)

In addition to his ongoing run on Supernatural, Benedict’s TV credits also include Bosch, Masters of Sex, Birds of Prey and Felicity.