Though Season 3 of The Chi opens with one of the happiest celebrations possible — a wedding! — the rings have barely been exchanged before we’re plunged into the grim reality of life on the south side of Chicago: a funeral of one of the show’s main characters.

In a dramatic move that won’t surprise those who’ve been following along with the Showtime series’ behind-the-scenes drama, Brandon is the one in the coffin. “He never had a damn shot! Neither did Coogie!” Laverne says, crying as she gives a eulogy full of regret for the way she was unable to love them unconditionally, because she hadn’t grown up with that kind of nurturing care. “I had no right to bring those boys into the world.” She adds that Brandon used her pain as the impetus to make a better life for himself. “He tried to run away from it, but he could never outrun me,” she laments. In closing, she says her sons “were all I had, and this city took ’em from me. So I’m always gonna be broken. And there ain’t nothin’ that’s ever gonna make me whole again.” In the audience, Kevin and Emmett wipe away tears. (Side note: In case you were wondering, Jason Mitchell isn’t in the episode; Brandon’s casket is closed, and there’s a giant photo of him on a stand next to it.)

How have other characters fared since last we saw them? A quick breakdown: 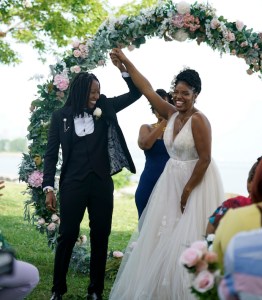 KEVIN AND KIESHA & CO. | The wedding that opens the episode is the union of Kev and Kiesha mom Nina to Dre; the brides are beyond blissful, even though Kiesha doesn’t stop rolling her eyes the entire time. Dre even gives her two official stepkids some gold jewelry to mark the occasion; the pieces are engraved with the longitude and latitude of their house, “so no matter where you are in the world, you can always find your way home.”

During the reception, Emmett (who’s carrying on with Brandon’s business and is therefore the caterer) and Kiesha steal away for a quiet moment where she admits that she’s scared to leave for college; he encourages her to get out and use track as a vehicle to build a new life for herself, even if the prospect of doing so terrifies her. “Don’t be afraid to leave because you’re too scared to see what’s out there,” he gently advises her. Later on, she tells him she’s planning on attending Pepperdine University in California, and he tells her she’ll always be in his heart.

While Dre and Nina are on their honeymoon at a hotel, Kevin, Papa and Jake invite some ladies over… and are shocked when Maisha shows up with them. But Papa acclimates quickly and asks Kevin if he can pursue Maisha, and they’re kind of a thing by the end of the evening. That same night, Kiesha goes out and is waiting for Nuck to pick her up at a bus stop when she goes missing, her cracked-screen phone on the ground the only sign that she was ever there. (Did we mention that Ronnie walked by and they exchanged a look just before she disappeared?)

REG’S FAMILY | As you might’ve guessed from that attack at the end of last season, Reg is dead. But his older brother, Trig, has returned and is interested in buying Jake back from Douda (who, by the way, is running for mayor). Along with his girlfriend Imani, Trig confronts his mom about the price she commanded for her youngest son — $5,000 — and then robs a man in order to get at least some of the cash. Oh, and he also arranges for a meeting where he kills the man who killed Reg.