Yellowstone’s Duttons are about to see red. When the Paramount Network drama returns for Season 3 Sunday (9/8c), they’re going to be nailed, so to speak, by “the inevitable hammer,” as new cast member Josh Holloway (Lost) calls his character, hedge-fund bigwig Roarke Morris. “He’s like the velvet steamroller, if you will. He is progress incarnate. You just can’t stop Roarke.” 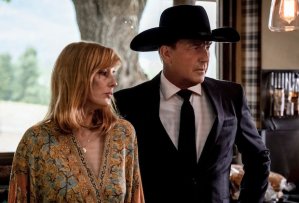 If the family dares to try, as the interloper’s shadow looms ever larger over their acreage, they’ll be setting themselves up for a rude awakening. “There’s been conflict before — other ranchers and real-estate developers messing with them,” Holloway notes. “But this is the first time they’ve come into contact with someone who can actually use the city government to [his advantage]. This is the real deal.

“There’s a line in the script that says, ‘When people talk about too big to fail, they’re talking about us,’” he continues. “So [John & Co. are] like, ‘Huh. What do you do with this?’”

What perhaps they should do is send in their own steamroller, Kelly Reilly’s badass Beth. From her first encounter with Roarke (watch it here), sparks fly. “Normally, she can emasculate a man pretty quickly,” Holloway points out. “So I don’t know if she knows what to do with the fact that he likes [her abuse]. He’s not combative, he’s going with it.”

The question is, how far will they go? “Roarke and Beth like each other, they’re just on different sides of the fight,” suggests Holloway. “But there’s a very interesting flavor to their relationship. In another life, if [her beau] Rip was gone, who knows? Maybe they could hook up.”

What do you think, Yellowstone fans? Are you looking forward to seeing Holloway make himself at home on the range?