The Politician is back on Netflix with a sophomore season full of election-year trickery… but Payton Hobart’s political career might be over before it even starts.

To refresh your memory from Season 1’s finale time-jump: Payton is now a student at NYU and running for state senate against longtime incumbent Dede Standish. Payton has his old high school campaign staff back at his side, but he’s still 10 points behind. James reminds him that he has “a nuclear bomb with the word ‘throuple’ written on it” at his disposal — Dede is in a secret three-way relationship with husband Marcus and boyfriend William — but Payton refuses to play dirty, insisting he’s “an ideas candidate.” Well, for now, anyway.

Astrid notices that Dede’s chief of staff Hadassah Gold is following her everywhere — even to spin class — and when she confronts her, Hadassah offers her a job working for Dede’s campaign as a mole. She even shows she did her homework about Payton’s last race: “You won that election, Astrid… it should be you running against us.” But it looks like we might have dueling moles: Payton’s high school nemesis Andrew shows up at his office and volunteers to go undercover inside Dede’s campaign. (He’s desperately in love with Infinity and thinks this will help him get closer to her.) 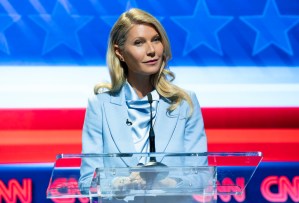 Payton and Dede spar at a 92nd St Y panel: She belittles him as a “single-issue candidate” and not a real New Yorker, while he pushes green energy and says he represents “a new generation of young leaders” that won’t be dead in twenty years. She points out he’s not the only Hobart running for office. Payton’s mom Georgina is running for governor of California after falling in love with a billionaire producer named Alison… and she’s running away with the race. She’s so far ahead that, during a televised debate on CNN, she can get away with calling for California to secede from the United States and become an independent country (#LetsGetTheCalOuttaHere).

Alice tries to cheer Payton up — they’re back together, and she’s not-so-subtly needling him to propose — but he’s still losing, and he’s tired of being asked about his mom in every interview. He pleads with Georgina to drop out, but she refuses: “You’re going to need to shine brighter, not ask me to dim.” Meanwhile, the moles are in place: Andrew infiltrates Dede’s campaign (Hadassah likes how he annoys Sherry), and Astrid accepts Hadassah’s job offer. Her first order of business is spilling to Hadassah: “Your candidate is in a throuple… and Payton knows about it.” 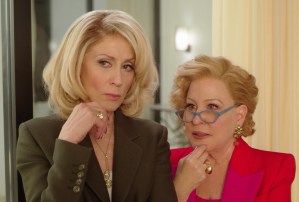 Hadassah flips her lid, bursting in on Dede, who tries to calm her down. (Dede: “This is manageable.” Hadassah: “Vehicular manslaughter is manageable. This is bats–t!”) Dede thinks they can just deny it, but Astrid caught them in the act, Hadassah says. She orders them to break it off, or she’s quitting. Dede hesitates… but Andrew falls on his sword and walks out on Dede and Marcus to work on a Massachusetts lobster boat. Plus, Payton finds his groove while railing against climate change at a rally with Infinity (“I liked that. Let’s do more of that”), while Georgina splits up with Alison and finds herself seduced by presidential candidate Tino, who likes her political acumen… and everything else about her. (He’s offering her the same VP slot he previously offered Dede.)

Dede can’t go through it, though. She and Marcus go up to Massachusetts and pull William off that lobster boat, and the throuple is back on. Andrew reports this to Payton — he bugged Dede’s office and home with waving Chinese cat statues — and, after a ghostly vision of River encourages him to be his authentic self, Payton confronts Dede and Hadassah with the throuple story, saying he’ll leak it to the press unless she drops out and endorses him. (“You really are an evil little troll,” Dede informs him.) But it doesn’t look like smooth sailing for Payton. His mom is now sleeping with Tino — who’s still married, with his wife in a coma, remember — and Astrid slyly tells Hadassah: “Don’t pack it up just yet. Payton was in a threesome, too.”

It’s time to vote: Grade The Politician‘s Season 2 premiere in our poll, and then hit the comments below to share your post-premiere thoughts.