Warning: This post contains spoilers for all eight Season 1 episodes of Netflix’s The Politician.

After a season full of high school campaign warfare, The Politician started fresh with its Season 1 finale, introducing a pair of new characters and mapping out a bold new future for itself.

The finale jumps forward in time several years, with Payton now a student at NYU and drowning his sorrows in booze and nightly piano performances. We learn that Skye avoided jail time for her poisoning plot, a much healthier Infinity got a book deal, and Ricardo is in prison — and playing Sky Masterson in a jailhouse production of Guys and Dolls, natch. But Payton isn’t doing so great himself: He’s stumbling home drunk every night, and having nagging visions of his dead pal River, now that he’s given up all of his political ambitions. 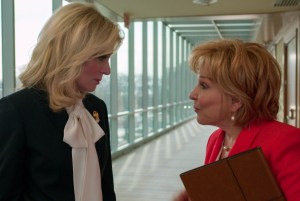 Meanwhile, we meet New York state senator Dede Standish, played by Judith Light, and her pushy chief of staff Hadassah Gold, played by Bette Midler. Dede is beloved by her constituents and has run unopposed for years; she’s even being groomed for a possible vice-presidential bid by a straight-shooting candidate played by Parenthood‘s Sam Jaeger. But she also has a secret: She and her husband have been in a throuple with a much younger man for years — Dede celebrates the VP news with “a nice, long devil’s triangle” (!) — and we have to think her path is eventually going to intersect with Payton’s, right?

First, though, Payton gets an invitation to Alice’s impending wedding and impulsively drives up to her college to talk her out of it. He tells her that her fiancé Thad looks like “a proper douchebag” and asks her to run away with him, but she recognizes now that their love wasn’t healthy — and is still bitter that he didn’t look back at her in the hallway. She tells him it’s too late and walks out on him, but offers: “Maybe we can have an affair or something.” When he gets back to his NYU dorm, his former advisors James and McAfee are waiting. McAfee worked on Dede’s campaign staff and knows they’re lazy and dependent on decades-old technology. (They still use Windows 99!) They have a simple proposal for Payton: Run against Dede for state senate, and reignite his political career. 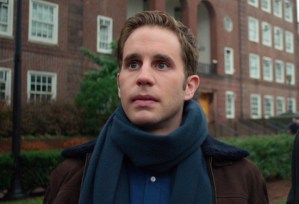 They even have a hot-button issue to focus on: the sorry state of New York’s subway system. Dede is in charge of funding the MTA, so if they hammer her on how bad the subway’s gotten, they can win. Payton still isn’t sure, though; he doesn’t even believe in himself. So McAfee and James round up the usual suspects: Skye, Astrid (who’s working as a server in a crappy buffalo wings restaurant) and Alice, who impulsively ditches her own wedding to volunteer to help Payton. After he sees all these friends backing him up — and gets a pep talk from the ghost of River — Payton is ready to throw his hat in the ring. The icing on the cake: Astrid knows about Dede’s secret throuple, after spying on her and her men at a catering gig.

So Payton officially announces his candidacy for state senate, railing against Dede’s lack of action on the MTA and unveiling his campaign slogan: “Get New York Back on Track.” Hadassah merely scoffs when she first sees him on TV, though: “He’s a fetus.” And when Dede asks if they should be worried, Hadassah just laughs: “No, this is going to be fun. We are going to eat him alive.”

Season 2 of The Politician — which has already been greenlit at Netflix — will focus on Payton’s race against Dede for her state senate seat, according to reports. Will you stick around to see the next step in Payton’s political career? Let us know in the poll below, and then hit the comments to share any and all Politician-related thoughts you might have.