The episode Labor of Love promos have touted since the series’ start airs this week, and it’s the one where the men get hooked up to electric stim machines and zapped into feeling like they’re going through childbirth.

Yes, it’s silly to watch the guys mug for the camera in a whole new way. But I’m far more entertained by the succinct, kinda outta-nowhere way Kristy dispatches one of her potential baby daddies later,  before the elimination ceremony even begins. She boots him with little fanfare — and, surprisingly for a show of this ilk, little drama — negating the need for an end-of-episode departure.

Read on for the highlights of “40 Year Old… Fathers.” 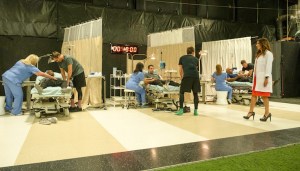 The guys dress in workout gear and are trucked to a gym, where they think they’re going to have to prove their mettle with feats of strength. And turns out to be true, in a way. After being instructed to partner up (Keith/Gary, Trent/Kyle and Stewart/Marcus, in case you were wondering), their attention is directed to a giant curtain that drops… revealing hospital beds and medical attendants.

“Gentlemen, welcome to Labor Pains,” Kristin Davis says. Next to her, Kristy is a study in blush athleisure wear. “We are going to test your mental toughness as well as your ability to be a supportive partner,” she adds. The guys, they freak.

An obstetrician steps up to explain that the men will have electrodes pasted to their bodies, and currents of various strengths will be administered to them in order to give them “firsthand insight” into what labor feels like. At any point, the men can tap out by ringing a bell set up next to their beds. (Spoiler alert: None of them do, which tells me less that the dudes are stalwart specimens with excellent mental fortitude and more that the shocks weren’t strong enough.)

Stewart, Keith and Kyle are in the beds first, with their partners providing encouragement. In an interview, Kyle says he is an endurance athlete who is used to long periods of severe discomfort. “I can handle this no problem.”

A moment later, the guys are writhing, yelling and panting as the stim machines do their thing. “She turned that machine on, and everything changed,” he adds, laughing.

As usual, I’m far more into what Kristin Davis is doing on the sidelines than whatever the guys are up to.. and at the moment, she and Kristy are losing their stuff over the histrionics happening. “Can Stewart have the baby for me?” Kristy says between giggles. And I have to admit: Dude is using some impressive breathing through the pain. In fact, the way that Stewart and Marcus guide each other through this ridiculous drill makes me want to watch THEM raise a baby together. So… spinoff idea? 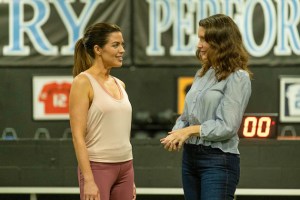 “What I saw today is all six of these men will be great fathers,” Kristy voiceovers once all the yelling and such is done. Really? With all of Trent’s hooting and howling? Once again, it appears Kristy and I have very different criteria for “great fathers,” but let’s move on.

Speaking of Trent, he’s Kristy’s first date this week. They go to Six Flags Over Georgia and have the park all to themselves, a situation I think he enjoys WAY more than the fact that he’s getting some alone time with the woman with whom he allegedly wants to have children. He earns a bit of my sympathy when he confides in her that his mom has Parkinson’s Disease, but then he loses it again when he brings up for the ZILLIONTH time the fact that if he doesn’t have a son, his family name dies out. At one point, they are enveloped in a flash mob-type dance thing to “(I’ve Had) The Time of My Life” from Dirty Dancing, and Trent does a (rather impressive) straddle jump, then kisses Kristy like they’re in a rom-com, earning huge cheers from the dancers.

Back at home, Stewart has left Kristy flowers and a letter, which she finds when she returns after her date. Sneaky! And after a group activity the next day (they all look at photo mash-ups of what their kids might look like, with predictably horrifying results), Kristy pulls Stewart aside to tell him how much she liked the gesture. “You’re the person I feel the strongest about in that way,” she says, and they come very close to smooching before Keith interrupts, pulling Kristy away to give her a bowl of food. They go downstairs to talk, and the conversation eventually turns to Keith’s demeanor. When he refers to his “fire,” Kristy immediately is on guard. “That is not a personality that I gel with,” she voiceovers after. “I’ve had that in my past. I certainly don’t want it in my present or my future. That could be a problem.”

Let’s shorthand Kyle’s date, which is basically just canoodling in front of the fire in her backyard: Wine, lots of kissing, Marcus looking on sadly from his bedroom where he’s trying to write Kristy a song. Sorry for the short shrift, Kyle, but we’ve got to get to her conversation with Keith the next day!

Kristy takes Keith aside and asks him again what he meant by “fire.” He runs through all the confrontations he’s had since he arrived at the house, and you can just see the NOPE piling up behind Kristy’s eyes as they chat. After a voiceover in which Kristy says she’s sensing that Keith’s anger flares “at the drop of a hat,” she lets him know she’s SENDING HIM HOME RIGHT THEN AND THERE. Wow. And he probably sensed that was coming, because he calmly handicaps his competition for her (“Gary and Stewart are the most genuine in terms of their intention toward you. Marcus is a mastermind. Trent’s a boy. And Kyle really hasn’t revealed himself. That’s all I’m gonna say.”) then goes inside to tell the guys he’s taking off.

In his voiceover, Keith spends a lot of time telling us he’s super unbothered, because although Kristy’s running out of time at 42, he’s a dewy 38 and has allllllllllll the time in the world to figure out his future family plan. A little shady, yes, but still way more mature than Angelo’s exit interview, right?

Then it’s Decision Time! Kristy tells Kristin Davis that her ex-husband had a temper, and she has no desire to repeat a relationship with someone like that. She puts Marcus and Gary in the We Need to Talk Box… but winds up keeping both of them around for another week. And you may think that makes either of those guys the week’s winner, but I’m going to give that designation to Stewart, who sneaks off to walk Kristy home and winds up carrying her most of the way — which she seems to love.