Octavia may have been the one getting her mind probed, but it’s safe to say that all of our brains are probably exhausted after Wednesday’s episode of The 100.

Here’s the thing about interstellar travel and time dilation — you either totally get it, or you just kind of nod along while you attempt to piece the story together in your brain and hope no one notices. I put myself firmly in the latter category, so you can imagine how much fun I had figuring out this week’s episode, which connected the show’s current action with several events from the previous season. Here’s what went down this week, though perhaps not in this order:

PLANET BARDO, 45 DAYS AGO | The episode begins with Octavia and Diyoza arriving on Planet Bardo, and although they put up a decent fight against their captors, both women are taken into the Disciples’ custody. Under the direction of Anders, the leader of the Disciples, a man named Levitt begins probing Octavia’s brain for useful information. Though her brain offers flashes of many familiar faces — including deceased characters like Lincoln, Lexa, Jaha and… was that Pike? — Octavia’s captors seem particularly interested in Bellamy and Clarke, the latter of whom is believed to be key to winning mankind’s final battle.

PLANET BARDO, 34 DAYS AGO | Over the next 11 days, Levitt basically binges the first few seasons of The 100 via Octavia’s memories, offering an interesting take on the warrior’s growth. “You’re amazing,” he tells her. “Maybe you lost your way somewhere, but you sacrificed so much for the people you love. Even as a child, forced to hide under the floor. You were terrified, but you never made a sound, because you knew that if they found you they’d punish Bellamy and kill your mother. You’re not a killer, Octavia. You’re a warrior, to be sure, but your heart is pure.” She replies, “Wait until you get to Blodreina.” (Uh… Spoiler alert!)

This nice moment is interrupted by grown-up Hope, who enjoys a brief reunion with her Auntie O. before helping her escape through the Anomaly. Levitt explains that because Octavia is going through without a helmet, she won’t retain any of her memories, so he scans Hope’s brain code and tattoos it on Octavia’s back. (This is one of those things you just have to shrug off with a “Sure, I guess that makes sense.”) While Hope goes to look for her mother, Octavia returns to Sanctum (circa Season 6 Episode 8) and is greeted by Gabriel.

PLANET BARDO, 7 DAYS AGO | We learn that Hope has been captured by Anders, who tells her that he’ll spare Diyoza’s life if Hope goes to Sanctum and retrieves Octavia. With no other options, she does as he requests, emerging from the Anomaly circa the show’s sixth season finale. (At the time, we thought that Hope was stabbing Octavia with a dagger, but we now know that it was a retrieval device.) The Disciples continue probing Octavia’s memories, though Levitt is considered too sympathetic to her plight, so Anders takes him off the case. To be fair, Anders isn’t wrong for doing so. Before he’s reassigned, Levitt sneaks a message (“trust Bellamy”) into Hope’s arm and teaches Octavia a secret trick to protecting her mind from the Disciples’ technology. I knew I liked him! 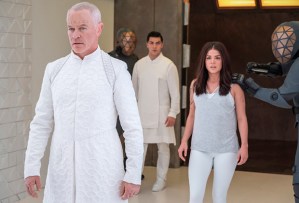 Anders then interrupts Octavia’s second round of probing with an announcement: Her presence is required to talk down Bardo’s newest guest… Bellamy! Octavia promises Anders that she’ll tell him everything he wants to know (“even about Clarke”) if he lets Bellamy go back to Sanctum. He agrees to her terms, but that doesn’t stop one of the other Disciples from going rogue and neutralizing himself… and Bellamy?!

PLANET BARDO, PRESENT | Here’s the thing about Bellamy’s supposed “death” we have to keep in mind: We don’t actually see it happen until Echo, Gabriel and Hope arrive in Bardo seven days later. And even then, it’s only a projection from Octavia’s brain. Levitt told her the secret to overpowering the Disciples’ technology, so it’s entirely possible that Octavia purposely fabricated that memory for reasons unbeknownst to the rest of us. Regardless, Echo is fully convinced that Bellamy is dead, and she takes her righteous fury out on Levitt’s replacement. (Rest in pieces, buddy!)

MOON SANCTUM, PRESENT | Wonkru must resort to drastic measures when the Primes’ remaining believers (a group now known as “the Faithful”) begin sacrificing themselves in protest of Russell’s incarceration. Murphy attempts to talk them down, but they immediately turn on him when he accidentally reveals himself to be a fraud. (Oops!) Fortunately, Russell shows up to verify that Murphy is who he claims to be, and to tell his people to stop killing themselves for him.

With that problem solved, along comes a new — arguably worse — predicament: Indra figures out that “Russell” is actually Sheidheda, leading to a tense exchange of unpleasantries between them. “I may not be able to kill you,” she says, “but I can make sure that when I do, you don’t come back.” She then orders a removal of the mind drive in his neck without the use of any painkillers. “Let him feel it,” she says. “For Abby.” (Yes!)

Your thoughts on this week’s time-bending, mind-blowing, heartbreaking episode of The 100? More importantly, do we trust that Bellamy is really gone? Drop ’em in a comment below.