The 100 kicked off its take-no-prisoners final season on Wednesday by… taking a prisoner. A big one, actually.

Picking up where last summer’s explosive cliffhanger left off, the premiere began with a desperate Bellamy screaming for Octavia, only to get knocked unconscious and taken away by an invisible enemy. Thus, the first of Season 7’s many mysteries was hatched: Where is Bellamy?

His disappearance is “going to play a huge role in the season,” showrunner Jason Rothenberg tells TVLine. “It’s the mystery people are trying to solve. It’s the thing that’s going to be driving so many of our characters this season — to find him and hopefully save him.” And while he promises that “we will see him again,” Rothenberg also clarifies, “Bob [Morley] asked to take some time off this season, and we honored that. We were able to write around it.”

Hope was initially hesitant to join Echo and Gabriel’s search party, but there’s nothing like finding a note buried in your arm that says “trust Bellamy” to make you change your mind. (I feel like we were all born with that note in our arms, but I’ll save that discussion for another day.) The unlikely trio set a trap for their invisible foes, and after enduring a quick hallucination (hi, Roan!), they entered the Anomaly hand-in-hand to find Bellamy.

And if you enjoyed that little Zach McGowan cameo, you’ll be very happy about this: “We like to honor our past and not forget characters that have come before,” Rothenberg says. “No one ever really comes back from the dead in The 100, but we find ways to work with actors that we love and characters that we love again. This season is no exception.” (It’s probably too much to hope for one last glimpse of Finn, but I can dream. Come on, dat hair!)

As we learned, the situation at Sanctum wasn’t much better. Sure, Clarke and her pals get to live in an adorable little farmhouse — how weird is it to see them casually sipping tea on a porch swing, by the way? — but their lives are a mess. Murphy is tired of acting like a Prime, Clarke is burying how she really feels about Abby’s death and, as Raven notes out, there’s a “powder keg” situation brewing between Wonkru, the people of Sanctum, the Children of Gabriel and the newly awakened Eligius convicts.

Clarke spent most of Wednesday’s premiere trying to keep the peace at Sanctum, but the growing cries for Russell’s execution made that an increasingly difficult task. She managed to maintain her chill for most of the hour, but when Russell handed her Abby’s necklace as a keepsake, she completely lost control, pummeling the Prime with her fiery fists of fury. 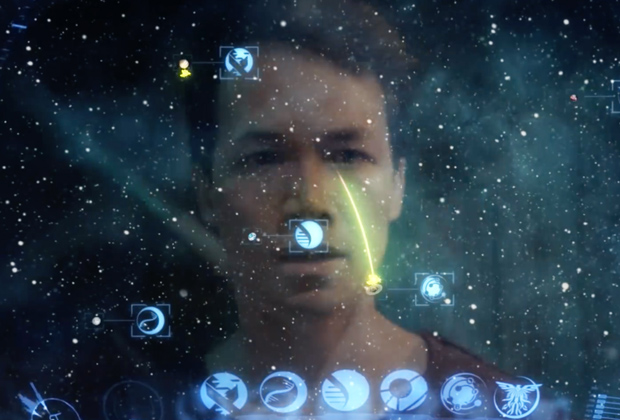 “That was the straw that broke the camel’s back,” Rothenberg says. “Clarke has not been reacting emotionally to the death of her mother … and suddenly it crashes down on her. She’s trying to keep Sanctum together. That’s her mission and she’s going to do it. But her friends are looking at her like, ‘It’s OK to grieve. You lost your mom.’ We realize at the end that it has been eating away at her, and it comes bursting out. She is great in that scene — and in the scene that follows it on the balcony. I think she crushed that, too. There was a standing ovation on set when she did that.”

It was during that powerful speech that Clarke declared her intentions to all of Sanctum: “There are no kings or queens or Primes here. We have no use for a palace. We are the last of the human race, and we’ve all made mistakes. Tomorrow, Russell Prime dies for his.” Little does she know, the Dark Commander (aka Sheidheda) has taken control of Russell’s body… and he’s got big plans.

“Sheidhea wants power,” Rothenberg says. “He wants to be in control and take his place on the throne. And there’s a palace at Sanctum, so that fits his agenda quite nicely. That drives his agenda moving forward. We don’t do this very often where the audience knows something ahead of the characters, but we have some fun with that for a few episodes this season.”

Your thoughts on The 100‘s final season premiere, from Morley’s professional break to Clarke’s emotional one? Grade the episode in our poll below, then drop a comment with your full review.