Heads up, humans: This interview spoils the events of Monday’s Roswell, New Mexico finale. Proceed at your own risk.

“Howdy, partner.” Those two words will haunt Roswell, New Mexico fans until the moment the show returns for its third season — whenever that is. But before we tear this episode apart, twist by twist, here’s a quick recap of what went down:

After deactivating the alien explosive and saving her town, Liz received an unexpected reward from the universe: Diego returned to Roswell with Dr. Margot Meyerson, a renowned scientist who not only offered Liz a fellowship but also volunteered to sponsor Arturo’s citizenship. (Yay!) But when Max learned that Diego was going to bring Dr. Meyerson to Liz’s lab without her permission, he torched the place, ensuring that no one would catch wind of Liz’s alien experiments. (Boo!) Understandably furious that Max resorted to such drastic measures without consulting her, Liz told him that she needs to figure out where he ends and she begins — making the decision to relocate to California even easier.

In other relationship news, Maria broke things off with Michael, Alex kissed Forrest in public (after performing an original song!), a rehab-bound Rosa told Helena — who’s already furious that Jesse Manes died as a “hero” — to leave town, and Kyle was overjoyed to discover that Liz’s interference saved Steph’s life. 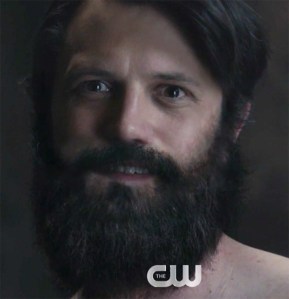 Then came the big reveal. Guided the whispers he heard when he touched the alien console, Max took Isobel and Michael to a secret tunnel, where they freed a mysterious stranger — the stowaway mentioned in Tripp’s journals. And he looks an awful lot like an evil, bearded Max. Below, executive producer Carina Adly MacKenzie answers (most of) our burning questions about this game changer:

TVLINE | I’ve never read [Melinda Metz’s Roswell High] books, and I never watched the first Roswell series, so I was really not expecting that final twist.
They did have a clone element on the first show, but it was kind of a funny thing. And it wasn’t in the books. Or if it was, I didn’t know about it because I only read the first one. That story actually evolved kind of organically.

TVLINE | We know he’s the stowaway, but what else can you say about this look-alike, if anything?
Very little. But after years of watching Nina Dobrev pull double duty on The Vampire Diaries, I’m really excited to throw that challenge at Nathan [Dean]. We had originally considered introducing his father at the end. We were shooting the scene in Episode 3 where the stowaway steps out of the ship, and I called Nathan and asked him to be the person who puts his hand on Nora’s shoulder. At that point, we were like, “Whoever we cast as Max’s dad is probably going to be a tall, dark-haired guy.” And Nathan wasn’t working at the time, because Max was still dead, so he was just excited to come to set. Jeff Hunt directed both Episode 3 and the finale, so I said to him, “We might [introduce a Max double]. Can you shoot it like we’re making a big reveal?” So he did, and then we saved that footage for the finale. Once we saw how cool it looked to reveal that it was a double of Max, I was like, “Well, I guess we’re not casting a dad!”

TVLINE | Since you brought up Nina, I feel like I can say that the “Howdy, partner” line gave me major “Hello, brother” vibes — in a good way!
[Laughs] We had fun with that. I think I had Nathan say it 100 different ways on the actual day, because there are so many ways you could do it where it’s either funny or sinister. And it works because, in the end, they are set up to be partners.

TVLINE | So that’s how we can expect Nathan’s other character to speak?
Mr. Jones learned how to be a human in 1948 Roswell, and he certainly has a bit of John Wayne to him. I’ve got Nathan watching old cowboy movies now as he develops the voice — and works on growing his beard.

TVLINE | I hate to boil it down to such simple terms, but Max and Liz are definitely broken up? Not just on a little break?
They are definitely broken up, not on a break. Their interests are diametrically opposed right now. On a second viewing, I think people will notice there’s more to Max’s choices in the finale than he might be revealing. He blew up Liz’s lab to protect his family and to stop her from continuing her experiments, but there are also some ulterior motives there. He’s had so many secrets for so long, he’s just not a good partner for her in the way she needs him to be right now. He’s got some growing to do before they can reconcile.

TVLINE | I do love them together, but I’m glad she chose her career.
She’s always going to be that girl. Sometimes I get notes from the studio and network, saying, “Can we have Liz stop talk about leaving town? The show is called Roswell. The audience knows she’s not leaving forever.” But it’s not about creating jeopardy. It’s about who this woman is, and she’s not settling in Roswell. It’s just not in her bones. Part of the struggle of telling this story, and part of Liz’s struggle, is balancing ambition with home and with love and with family. She’s always going to be doing that.

TVLINE | I’m also proud of Rosa for going back to rehab. What does the future hold for her?
She’s going to finish out her grogram, and she’ll have been sober for a little while when we catch up with her in Season 3. We’ll get to see her grow up and become who she really is as an adult, as opposed to this perpetual teenager trapped in her angst forever and ever — not that I can relate at all. [Laughs]

TVLINE | She had some strong words for her mother at the end. Do you see Helena having a place in this story, even after her plan went up in smoke?
A reconciliation between Liz and Helena is a story we’ll explore down the line, but for right now, she had this grand idea of revenge and justice — and justice wasn’t served. She’s going to have to grapple with that. There’s going to be a statue of Jesse Manes in that town. He died a hero, and that’s incredibly frustrating for her. Meanwhile, she’s grappling with addiction and with mental illness, the same things Rosa is up against. Down the line, there’s a story to be told about her showing up for her daughters, but it’s going to be a while.

TVLINE | Lastly, I just want to give Michael a hug. How is he feeling about himself right now?
He’s actually, for the first time in a long time, feeling a little bit of hope. He knows he has to get over Maria before he starts anything up with Alex, but I think after listening to Alex’s song, he has some hope for their relationship. At the beginning of the season, he was pretty hopeless, so just that little glimmer maybe there’s still a story to be told here is enough. We’re making progress. Baby steps.

Your thoughts on the finale? What did you love? Not love? Grade the finale (and the season) below, then drop a comment with your full review.