We knew they were coming. The closer we got to the Season 4 finale of Insecure, the more clearly we could see not only those turning points fast approaching but also the exclamation points with which they were followed. So, when all was said and done, did Issa wind up with rekindled old flame Lawrence… or did she decide to give it another go with her other ex, Nathan? Or was the whole sexy conundrum left unresolved? And did Molly convince Andrew to stick a fork in their relationship? Read on, and we’ll go over all the momentous twists and turns of “Lowkey Lost.” 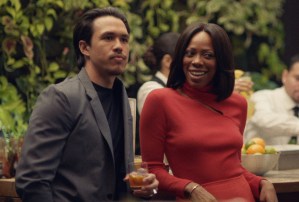 ‘WHAT MAKES A FLOWER A FUNERAL FLOWER VS. A FUN FLOWER?’ | As the season-ender began, Lawrence told Issa that he’d gotten the job in San Francisco — he’d get his own team, a corner office, an assistant, the works. “So,” he asked, “what’s the deal? Is the distance a deal-breaker?” Hell, no, replied Issa. In fact, if things stayed cool between them, she might even move. “I can make new friends. S—t, I might need to.” She just wanted things in her life that made her happy — and he did that. Miraculously, they were 100 percent on the same page. Meanwhile, at a work event of Molly’s, Andrew amused them both by picking Taurean out of the crowd. When she introduced him to young, hot BJ, tensions rose noticeably; Andrew clearly wasn’t down with going out with the gang and BJ after the party yet agreed to. Later, he got miffed when his girlfriend wouldn’t let him watch the Looking for LaToya reunion without her. In no time, they were in an argument about how he had to bend over backwards for her, whereas she never bent over at all for him, backwards or otherwise. In the middle of their spat, Kelli kept calling — Tiffany had told Derek that she had to get out of the house… and had never come back. 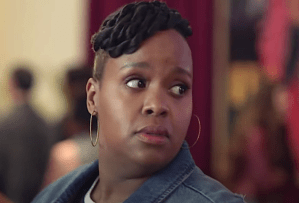 ‘REAL TALK: MY INNER BLACK WOMAN LOOKS JUST LIKE YOU’ | At Nathan’s barber shop, he showed Issa an adjacent room in which he thought she could hold a future event. While the two of them were in there, he apologized for calling Lawrence “sometimes” and admitted that hearing that they’d reunited had messed with him more than he’d expected. That said, he wanted to be honest about how he felt. Which was… ? Nope, he didn’t make the confession of love that I was expecting (and that the promos had led me to expect). It was just that he’d been bummed to have missed his chance with Issa. By and by, she and Molly joined Derek and Kelli searching for Tiffany, whose margarita intake at a movie theater tipped them off to her next destination. Security footage from a nearby Mexican restaurant revealed that the new mom had gotten on a bus about 15 minutes before she’d last phoned her husband. “I knew she wasn’t happy,” he admitted, “but I thought maybe time would help. I just didn’t think it would get this bad. I can’t believe I let this happen.” Finally, Kelli discovered that Tiffany was at a nearby Sheraton and made the mistake of pushing the bus driver’s door-opening red button. Quicker than you could say, “Oh, hell no,” the police were involved. Thankfully, Molly lawyered up fast enough to defuse the situation before Kelli got tased. Again.

‘WHAT ARE YOU FIGHTING FOR RIGHT NOW?’ | At the hotel, Derek and Tiffany reunited. “I’m sorry,” she whispered. “I just didn’t know what else to do.” Aw. It takes a lot to make me feel for Tiff, but that did it. The morning after, Andrew told Molly that they just weren’t in sync and asked, “What if we’re just not a good match? I don’t think [a relationship] should be this hard.” Molly didn’t want to let it go… but what was “it,” really? Was what they had what she really wanted? She didn’t have an answer to that, which was kind of an answer unto itself. At Issa’s, Lawrence dropped a bombshell: Condola had come over the previous night: She was pregnant. In a flashback, Lawrence asked if she was sure that the baby was his; it was. It happened before he’d reunited with Issa, before he’d gotten the job in San Francisco, before all of that. “Is she gonna keep it?” Issa asked. Yes. Condola wanted kids, even if she wasn’t with the father. Lawrence went on to explain to Issa that he wasn’t getting back together with the mom-to-be, but… sigh. “This is too much,” said Issa. It was certainly a lot.

As the episode, and the season, drew to a close, Issa joined Molly for dinner at the restaurant at which they’d almost crossed paths during their estrangement. “I’m glad you came,” said Molly. “I’m glad you called,” Issa replied. Us, too. So, what did you think of the Season 4 finale? Did you predict Condola’s pregnancy? Grade the episode in the poll below, then hit the comments.