We’ve always known that Clarke Griffin was special, but “the key to winning the last war mankind will ever wage”? This woman truly never ceases to amaze us.

This bombshell was dropped by the Sanctum-crashing Disciples on Wednesday’s episode of The 100, but like most intergalactic cults, they came with ulterior motives. Though the visitors claimed they had no intention of harming Clarke, a cursory examination of their high-tech suits revealed to Raven that the Disciples considered Clarke to be a target. With little time to spare and no other viable options, Raven — who already blamed herself for last week’s reactor core tragedy — added eight more corpses to her conscience, executing a sneak attack using the Disciples’ own invisibility technology.

Being the genius that she is, Raven also figured out how to crack the code of the Anomaly Stone, enabling Clarke & Co. to leave Sanctum in search of their missing pals. With no clue where to start, Raven literally picked one of the other six planets at random, instantly transporting the rescue team to a frozen wasteland.

“They’re not going to stay on that planet for very long, fortunately, but the adventure that happens on Nakara is surprising and fun and definitely one to remember,” showrunner Jason Rothenberg tells TVLine. 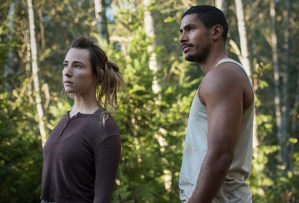 Wednesday’s episode also took us to back Planet Beta, where Hope, Echo and Gabriel spent five years bonding with — and learning from — their new prisoner pal Orlando. This was a bit of a deja vu experience for Hope, who previously spent 10 years with a prisoner named Dev, the man who taught her how to fight. They had planned on escaping the planet together once his sentence was served, but Hope froze on the big day, watching helplessly as the Disciples slaughtered Dev before her very eyes. She was determined not to repeat her mistake.

Of course, Hope also didn’t anticipate Echo going rogue once it was time to escape. The plan was simply to knock out the Disciples, steal their suits and make it look like they took Orlando captive — but Echo reevaluated the situation at the last minute, killing the Disciples and leaving Orlando all alone on Planet Beta. “He is our friend, but we are not his people,” she told a horrified Hope and Gabriel before ushering her friends into the Anomaly.

“In that moment, she’s a couple chess moves ahead,” Rothenberg says of Echo’s apparent betrayal. “If they took Orlando and jump in as planned, who knows how many people they would run into that he trained, or that he knew, or that he loved? If he couldn’t go through with it, they would all be screwed and their mission would fail. So she made that difficult choice in that moment. That’s who she’s always been. She’s an efficient warrior, and she would do anything to save Bellamy.”

Tragically, we learned from one of the Disciples on Sanctum that Orlando took his own life after being left on Planet Beta by his friends. Rothenberg pays tribute to the ill-fated prisoner, calling him “an amazing character who gives such a surprising performance that really stays with you.”

Your thoughts on this week’s unexpectedly tragic hour? Any theories about who kidnapped Gaia in those final moments? Whatever’s on your mind, drop it in a comment below.