From Sanctum’s reactor to the very fabric holding Wonkru together, Wednesday’s episode of The 100 was basically one near-meltdown after another.

Against the urgings of her mother, Gaia spilled the beans to her people: “There is no Commander. She had fallen prey to Sheidheda. The Dark Commander took her over, and I could not let that monster lead Wonkru, so I destroyed the Flame.” It went over about as well as you’d expect, prompting Indra to scoff, “Congratulations. You just lost Wonkru.”

In Gaia’s defense, she pretty much ran out of options. With Sanctum’s core approaching a meltdown, she was asking (on behalf of the Commander) for volunteers to enter the reactor, a request that was met with understandable skepticism given Maddie’s extended absence.

With no one in Wonkru willing to risk dying for a non-Commander, Raven was forced to recruit four members of the Eligius crew — including a handsome devil named Hatch — to get the job done. Despite his cocky attitude, Hatch turned out to be a pretty decent guy, despite his years of murdering innocent people. (Come on, at least he felt badly about it!) 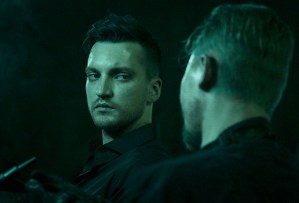 In the end, Hatch gave his life to prevent Sanctum from going kaboom, his make-good for all the lives he and wife Nikki took throughout the years. Speaking of Nikki, she was not super happy to learn of her husband’s demise — and she took out her aggression on Raven’s face.

Meanwhile, Russell — still possessed by the Dark Commander — prolonged his execution by playing some expert mind games with Clarke and Jordan, neither of whom knew that Russell planted a shooter in the crowd during his final address. So not only did Russell managed to escape death, suffering only a minor gunshot wound, but he also got a celebratory cookie in the infirmary? The Dark Commander truly is a criminal mastermind.

Your thoughts on Wednesday’s episode? Drop ’em in a comment below.