This has been a tough week in the middle of a tough year, so please allow me to distract you with the ridiculous fact that one of this week’s Labor of Love departing dudes literally pees on the house as he says his final goodbye.

See? Now you may not feel better, but at least a teeny part of you is intrigued. Read on for the highlights of “10 Things Kristy Likes About You.”

Trent starts off the episode by being, as my much-missed colleague Michael Slezak used to say, not just too much but 1-800-2-Much. He literally cartwheels into the living room, setting a vibe on which he will only double down for the rest of the hour. The guys get a message on the TV: They’re going to take a half-hour aptitude test “before it’s back-to-school time.”

After they sweat through the test, a school bus pulls up outside and brings them to Parent Prep Academy, aka a local school that production has taken over for the day. The gym is set up like a pep rally — complete with screaming students — for “Genius Vs. Gents,” a challenge that essentially boils down to Are You Smarter Than a 5th Grader? with Kristin Davis in the Jeff Foxworthy role. In an interview, Kristy says that smarts are important, but the task also will be the first time she sees how the guys interact with kids.

It’s embarrassing how much better the kids do on all of the questions that we see, so let’s skip over most of it. But wait: There’s one about romantic relationships AND THE KID EVEN SMOKES THE ADULTS ON THAT ONE. Anyway, we eventually get the results of the aptitude tests: Out of a possible 100, Harvard grad Marcus scored highest with a 91; Keith came in second with an 83.

Kristy also answers some silly questions about which guy she’d most like to do [insert activity here] with, and her responses send the guys spiraling. In the house gym the next day, Keith worries that the fact that she said she’d like to go on a road trip with him equals friendzone. “That’s a lot of time in a capsule,” someone says off-camera, and while I can’t be sure that it was Gary, it’s phrased so weirdly, I’m pretty sure it was Gary. They’re also super jealous of Kyle, because Kristy said his name twice during the Q&A session. 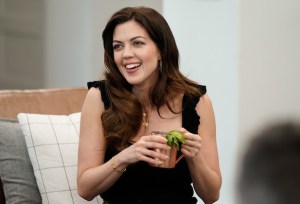 Later, when Kristy visits the guys’ house for a little hangout, Jason takes her downstairs to play quarters and ask her about the important things in life, like, “Have you ever had quiche?” When he wins at the drinking game, he wants her to kiss him, but she demurs and then just gives him a peck on the cheek. He is disappointed. In an interview segment in which he seems REALLY not sober, he offers this wisdom: “Lovers kiss here [indicates lips[, not here [indicates cheek]. And then real lovers kiss here [indicates below the waist], not here [indicates cheek].” In case you were looking for a quote to stitch onto a ringbearer’s pillow or something.

Let’s get to the episode’s dates, shall we? Stewart is first, and the two of them hang out at her house and make dinner together. It’s low-key and cute, and I’m really liking Stewart on the whole. [Side note: Doesn’t it seem like a no-brainer for the show to lock down a meal-kit company to sponsor/provide the dinner?] They’re interrupted by a knock on the door: It’s Jason and a shirtless Trent in a silly hat, who demands to know where his stuffed cat, Snoots, is. Word to the wise, Trent? The “OMG this guy in my dorm is so crazy!” thing always wears thin by fall midterms. They leave. Stewart talks about how his dad struggled with addiction and how his mom “is my best friend.” The latter may be a red flag or a sweet footnote; it’s just too early to tell. (By the way, one of the guys hid Snoots in the first H of the FATHERHOOD sign.) Stewart and Kristy slow-dance to a string quartet that just happens to have set up in the sideyard, then he kisses her goodnight and she seems really into it.

The next morning, Walker gets word that his date with Kristy will involve an overnight trip. He and Kristy go to Savannah, where they take a boat ride, kiss on top of a lighthouse and talk about how he’s not just a funeral director, he’s also involved in a tech company that issues the world’s first solid gold credit card…? Before you can say “Magnises,” he’s telling Kristy how he travels all over the world for work, and she’s starting to wonder whether he’s actually ready to settle down and have kids.

And then it’s decision time! Trent literally prances around the room when he sees that he’s safe. Does Alan have bad allergies, or is he really near tears when Kristy decides to keep him for another week? At the end, Walker, Jason and Angelo are in the We Need to Talk Box.

Even before he talks to Kristy, Angelo is all, “Do I even want to stay here if I’ve been in danger of leaving two weeks in a row?” And when she tells him that she doesn’t feel the connection between them so he’s going home, he interviews that she never would’ve made it with his friends or family. Oh and then there’s this, said scoffingly: “She’s like a 4, at best. You know what I mean? I hang around with 10s and 12s all day.”

I have so many responses to this, I shall number them.

1. I highly doubt that.
2. So, is this on a scale of 1-10? 1-12? 1-25? I’m fascinated to know the details of your highly scientific process.
3. For whatever reason, Angelo’s comments make me suddenly, weirdly and fiercely protective of Kristy. Like, how DARE YOU, SIR?

She also lets Walker go but cries as she does so, saying he’s the first person she’s sent home where it actually feels like a break-up. (But she also doesn’t want her kids growing up in a funeral home, and I saw The Haunting of Hill House, so I can’t blame her.)

But Jason’s ousting is kind of perfect in how well it encapsulates his time on the show. He reiterates that he’s “not really into the city life that much.” She says they’re not on the same page. Then he runs out of the house, yells “North Carolina! Daddy’s coming home!,” then urinates on the wall outside before he gets into the car that’ll take him to the airport. “Right decision,” Kristy says to the camera. “That’s all I have to say.”

Now it’s your turn. What did you think of the episode? Did the right guys go home? Hit the comments and let us know!