Warning: The following contains spoilers for Monday’s The Baker and the Beauty. Proceed at your own risk!

If you were rooting for The Baker and the Beauty‘s titular couple to get back together during Monday’s two-hour finale, you got your wish — and then some!

Spurred on by his family and Lewis’ confirmation that Noa loves him, Daniel rushed to the airport to stop his ex from getting on a plane to Morocco. But when he arrived at her gate, the doors were already closed. Then a dejected Daniel received a glimmer of hope: a phone call from Noa. Yes, she got off the plane, as if there were any doubt. (We’ve watched enough rom-coms to see that one coming.) After the pair said “I love you” and admitted that their breakup was a mistake, Noa wondered what was next for them. Well, how about an… engagement?! As the season closed out, Daniel revealed to his family that he and Noa are getting married.

On another romance front, Mateo and Vanessa hooked up in Part 1 of the finale. Mateo later told his brother about his feelings for Vanessa, and after getting Daniel’s blessing, Mateo played for Vanessa the song he wrote about her. She was touched and impressed… and so was music producer Marlow, who was hanging out at Vanessa’s apartment. Awkward!

Below, showrunner Dean Georgaris explains Noa and Daniel’s sudden engagement and previews the challenges ahead for the couple. Georgaris also teases the four love stories in store for Season 2, should the show get renewed. 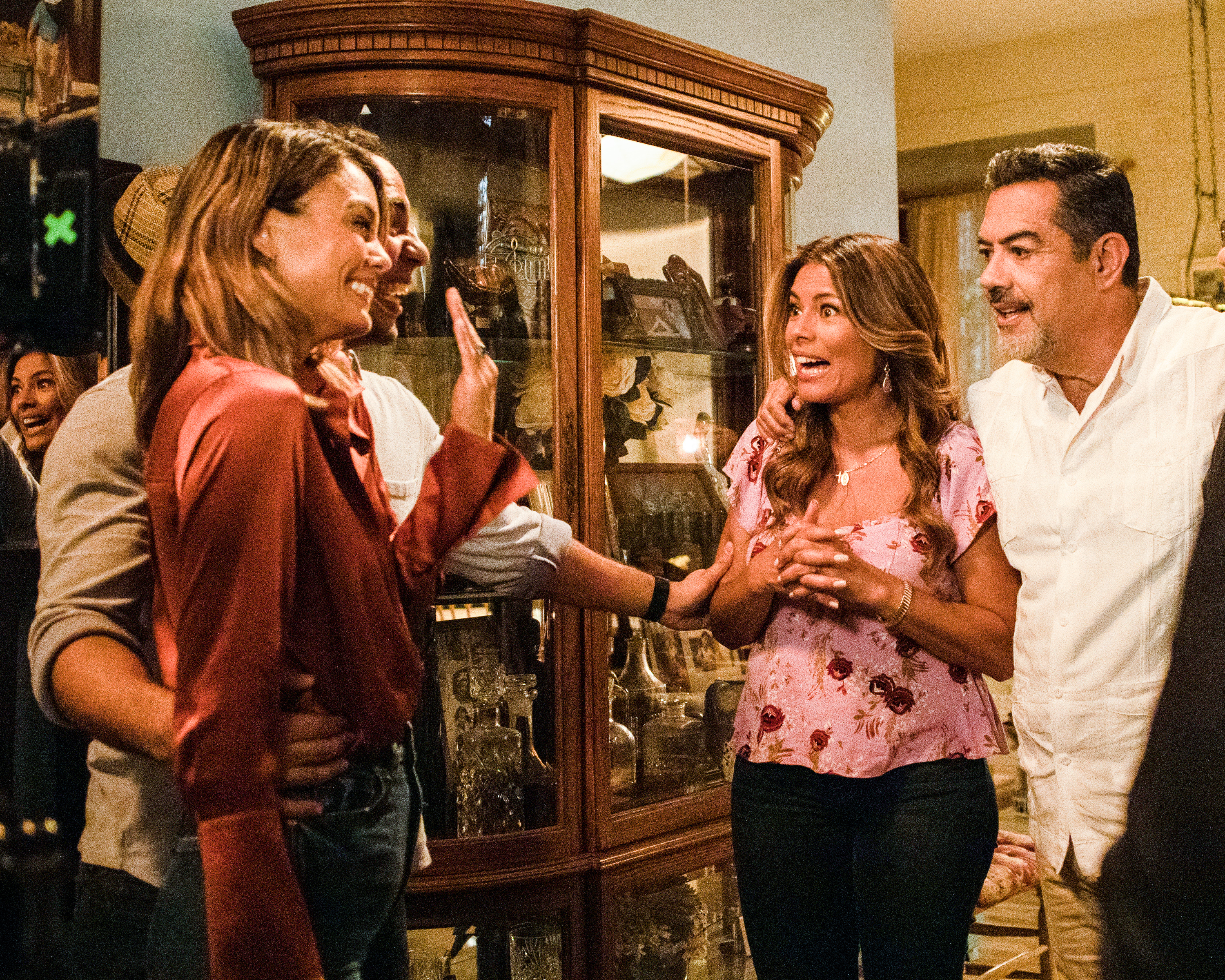 TVLINE | Daniel and Noa went from reuniting to engaged within one scene, but we didn’t see the whole conversation. So what led them to make that big decision?
What led to it was probably the next five minutes of conversation, which were like, “What do we do now?” and going with that rush of being reconnected, and it feeling so right. For better or for worse, just running into an impromptu sort of half-joking, half-serious proposal that gets a “yes” and a “yes,” and that Louis is mortified with. But we don’t get to see any of that. We just get to see the fun reaction from the family. The design was always that they end Season 1 together, but what I wanted to do was say to the audience, “OK, you’ve been rooting for them to be together all season. Careful what you wish for! You thought it was a good idea for him to chase her to the airport. How do you feel if I tell you that now they’re engaged?” And of course, getting to play the family’s reaction to it, which is maybe not the most excited reaction, it felt honest to us, in a way, with how crazy their relationship has been, and it felt like it set us up for an interesting story for those two characters in Season 2.

TVLINE | The family looked very shocked. Even though they encouraged Daniel to get back together with Noa, are they going to stop short of being supportive of the engagement?
One of the things that’s exciting about the show for all of us, the writers and the producers, is it’s called The Baker and the Beauty, but we actually have three bakers and three beauties, and then if you count Belissa [Escobedo]’s character [Natalie], who’s a baker and a beauty, I would argue we have four bakers and beauties. So with Season 2, the idea is, really, to tell four love stories now, not just Noa and Daniel. So what you’ll find is cautious support about the idea that they’re engaged, but for those two characters, the consequences of being engaged, that really starts to tell a story of, “OK, you love each other, but are you actually good partners?” I think that’s something we can all relate to. That’s that next phase in a relationship. And as they try to figure that out, and as his family watches them try to figure that out, then what becomes fun is we have the opportunity for Daniel’s family to, at times, feel closer to Noa than Daniel. They can be furious at Daniel, they can then feel furious at Noa. Noa’s in the world of the Garcias in Season 2, and that just breathes a whole new life into the show.

TVLINE | Both Noa and Daniel also have big career opportunities, with her movie and his videos for the newspaper. How might the engagement impact that?
Well, what’s fun for us is she has this opportunity to do something very special, and that requires a lot of time, and it puts a lot of pressure on her as a woman, which puts a lot of pressure on their relationship. And same thing with him. When you have a couple that’s engaged, [who] each have incredible career opportunities, well, that’s going to be an interesting prism through which you can see: Where do they prioritize relationships in their lives, and how comfortable do you feel putting each other first all the time? Yes, we have the sort of fairy-tale prism of her being a super celebrity, but we want the relationship to feel like, “Oh yeah, I’ve been through that moment. Oh, I’ve had that problem.” I think we’ve set ourselves up for a Season 2 that has a lot of obstacles — not to them as a couple, but for them if they actually are to go through with it and become a married couple. 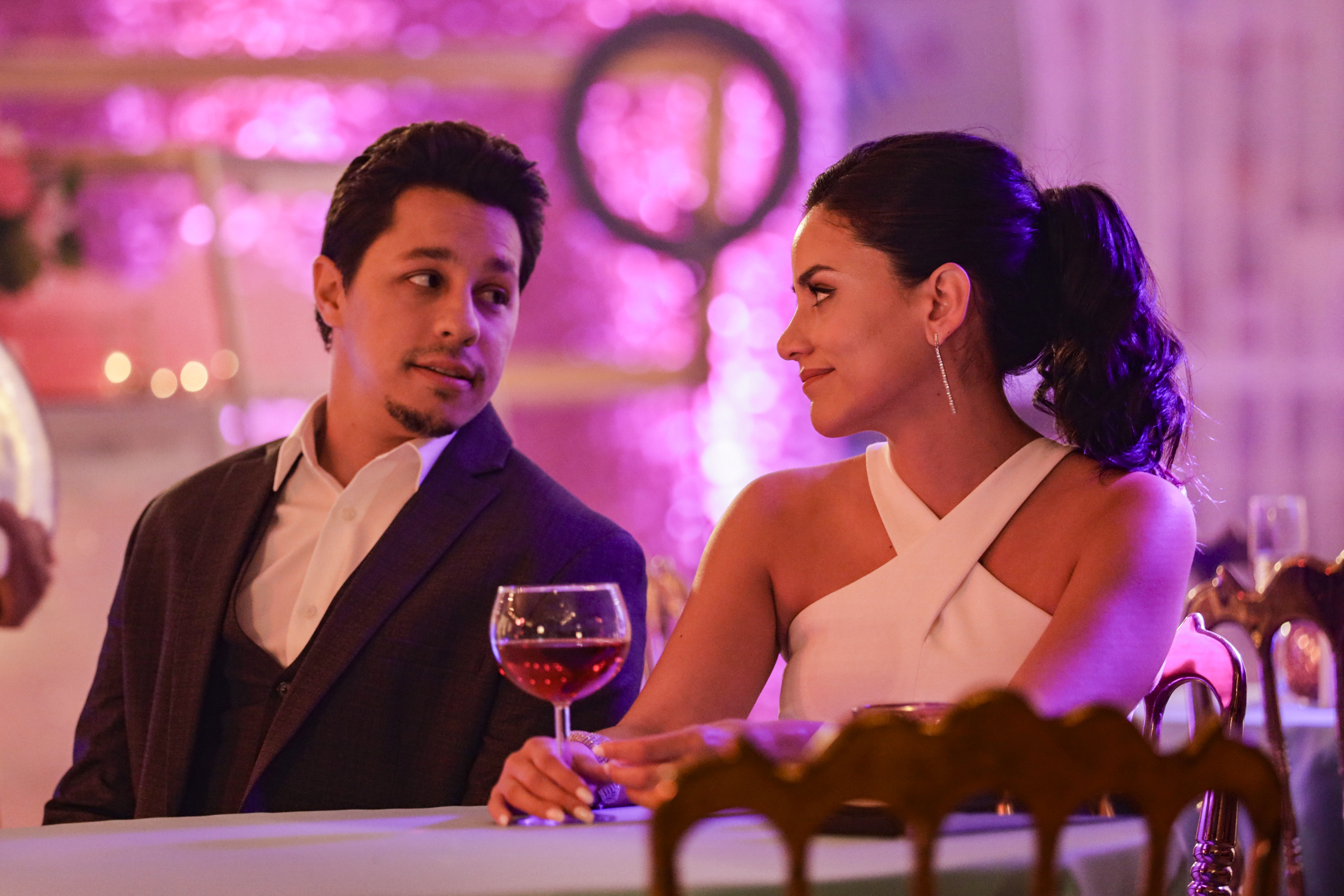 TVLINE | We need to talk about a would-be couple: Vanessa and Mateo. Is she actually interested in the producer?
She’s just starting to get to know the producer. I think there are a lot of things that she likes about him. If you think about the qualities that she likes in herself, like self-starter, entrepreneurial, committed, passionate, driven, Marlow is all of those things. What becomes fun is he’s good for her on paper, but me, personally, and I’m hoping a lot of our audience thinks Mateo is the one who’s right for her in life. We’ve got ourselves another tortured, will-they-or-won’t-they love story that we get to play with in Season 2.

TVLINE | At what point did you know that you wanted to pursue a romantic storyline between Vanessa and Mateo? Was it always in the plans? Or was it that you saw the chemistry between actors?
It was always in the longer-term plan. I had a very clear plan for what I wanted Daniel and Noa’s relationship to do in the first four seasons, and I knew, at some point, I wanted to probably get Vanessa and Mateo together, just because their two characters actually seemed like they would fit really well, but we were going to make it a slower burn. [But] David Del Rio and Michelle Veintimilla are so talented, and they had so much chemistry on screen, and they both stood out in their individual scenes, and then they came to life so much when they were together that we all collectively, honestly, after seeing footage from the first couple of episodes, as a writers’ room, we sped that relationship up, because the speeding of that felt believable to us. The incremental steps of that relationship felt right to us based on the actors we had. 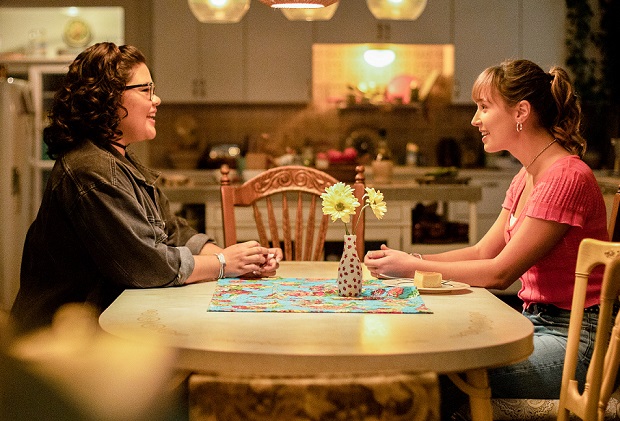 TVLINE | What are you looking forward to exploring with Natalie and Amy if there is a Season 2?
I mentioned before the idea for Season 2 is, in a way, four love stories, and part of that is at four very different, equally crucial moments. So for Daniel and Noa, it’s basically, “Are we right together or not, in terms of being married?” And for his parents, it’s going to be a little bit about that transition from when you had to worry about every penny, and you had three kids in the house, to, suddenly, two of your kids have moved out, and you’re starting to be empty-nesters a little bit.

With Natalie and Amy, what we’re talking about is what happens when you’re young people thoroughly in love, and then life circumstances begin to throw hurdles in your way. So instead of it being personal emotional hurdles like you haven’t told your parents or they’ve got to get used to it, what if it becomes: Amy’s a senior. Where’s she going to go to college next year? And is it going to be nearby, or is it not going to be nearby? I remember in high school, my first love, everything about it was so dramatic, and it’s so emotional, and you think it’s gonna last forever. For Natalie and Amy, they’re very much in love. They start to consider what that actually means when you’re their age, and when all of these big changes are coming your way. They’re two very bright young women. Neither of them wants to get in each other’s way. But not getting in each other’s way, it could potentially be in conflict with being together. Again, the idea being: Let’s explore love at four points in life that almost all of us could probably relate to in some form or another.

TVLINE | It seems like Lewis is turning the corner. Is he doing better?
Yeah. When you have an actor of Dan [Bucatinsky]’s caliber — we have an incredible ensemble — it gives us, as writers, a lot of freedom and a lot of responsibility. We get to cover a lot of ground, emotionally, because we know the actors can do it. Lewis, for all intents and purposes, has been Noa’s manager and father figure for 15 years, let’s say. Now she’s got a ring on her finger, and she’s got a man in her life who is going to be taking over, certainly, the role of shoulder she cries on, first person she tells things to. Lewis is handing part of his life responsibility off to someone else, which creates room for him to figure out what else he might want to do with his life and his time, whether that be re-energizing himself as a manager and maybe take on new clients like Mateo, or whether that be him wanting to start a family… Season 2, for him, becomes thinking about his future. He’ll always be Noa’s manager, and he’ll always be Noa’s father figure, but her life is changing, and as a result, his life changes, too. That’s exciting because, to me, as we spent time with Lewis during the season, we got to see that he wasn’t necessarily the stereotype that we might have thought after one or two episodes. So just getting to go deeper and deeper with that character is really exciting.

What did you think of the season ender? Grade it below, then hit the comments!