Psst, Labor of Love? I think you might’ve misunderstood the old “Love bears all things” quote.

In a move that is chef’s-kiss perfect for this show, producers this week employ someone to dress up in a bear costume and scare the guys while they’re having one-on-one time with Kristy in the woods. Y’know, just to see who’ll protect the little lady and who’ll run screaming for the craft services tent, I suppose?

Along the way, though, the whole scenario unearths something much more interesting: It shows us which of the guys is willing to rat out his competition in order to gain an advantage with Kristy. But will that dude make it past this week’s eliminations? Read on for the highlights of “Crazy, Stupid, Bear.”

At the start of the episode, the guys hang out at their house and wonder what their next task will be. Gary sneezes and blows his nose throughout, which I can only guess is laying ground for the “Gary is a weirdo” edit that really gains steam in this ep. Speaking of editing, the show’s Powers That Be think it’s important right at this moment that we hear Budge’s weird voiceover that “I’m just a traditional, conservative American man looking for an American woman to share my dreams with.” OMG is the twist going to be that Kristy is actually… Canadian?! The men get a message from Kristin Davis that says that “parenting can be wild” and they should dress their best for that evening’s drill. Budge grumbles about… not having enough Metamucil or something. (It’s not that, but seriously, why does he seem like such a grandpa? The guy is so curmudgeonly, and he’s only 44!) 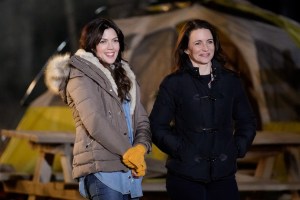 It turns out that the night’s activity is spending some alone time with Kristy in a glamping set-up somewhere in the woods. There are s’mores, hidden cameras and the aforementioned bear, who’ll pop out of the trees unannounced just to stir stuff up. “This drill is going to give me insight into how these guys are going to be strong and protective fathers,” Kristy says. I happen to think that a kid also might benefit from a mom who’d at least try to protect her own damn self from a wild animal attack, but you do you, lady. Back at the men’s area, a wildlife ranger tells everyone that there are black bears in the area, then teaches the guys to make themselves appear as big as possible and use calm, assertive energy to yell “Get! Get! Go!” at any ursine interloper that happens across their path. Some of the men practice. But Budge stands there, hands in his pockets, because no Commie bear is going to take him down.

Let’s fast-forward through the fireside chats, because they are pretty ridiculous. Mario is first, and he really ticks off Kristy by saying that he wants to have two boys. I’m not sure if editing or Mario is to blame for what a chauvinistic dolt he comes off as here, but Kristy — who has two sisters — later deems him “insensitive.” Next, Angelo starts talking smack the minute he gets near her, saying “some people” have mentioned wanting to leave the show and then flat-out tattling that Alan didn’t know her name and that some people in his house have taken to calling Gary “Ted Bundy” on account of his weirdness. Then, in the game of telephone that shows like this love to employ, Kristy tells her next guy — Matt — that she’s heard that some people on the show don’t know her name. “You OK?” he asks in a tone of voice usually reserved for someone who’s lost a close relative. Dial it back, dude. They’re talking about his past when ENTER THE BEAR! From his reaction, I think Matt knew from the start that the bear wasn’t real, but who knows? Alan is next. He apologizes for calling her “Cindy” and GOOD LORD WHY IS SHE CRYING ABOUT THIS? When it’s bear time, he pulls her down next to him and they lay in the fetal position so long, the bear actor comes over and starts batting at Alan. A montage shows us how the others reacted, and I get a very “I love lamp” vibe from Gary as he tells Kristy to sit still as the bear approaches. At the end of the night, the bear high-fives them all, then they head home.

Kristy picks Matt and Marcus as her first one-on-one dates. Although I generally like Matt’s feel, I’m a little weirded out by how he only talks to Kristy in a soft voice, as though she’s a little kid. They have wine and cheese and watch fireworks, and she confides in him that she was vacationing in Nice during the terrorist attack in 2016. Surviving that situation, she adds, taught her what was really important. When they come home, he kisses her… while the rest of the competition stare at them from across the driveway like total creepers. Her date with Marcus takes place in a suite at an Atlanta Hawks basketball game. Marcus wins points with me for keeping it real as he points out that, “To be fair, this would be a very expensive first date for me.” Then they’re targeted by the Kiss Cam, and after an awkward moment, he kisses her on the side of the head. Kristy keeps interviewing she has a “crush” on Marcus, and… is that even possible when someone is actively courting you? Aren’t crushes all secret and giggly? The guy literally uprooted his life for several weeks on the off-chance you’d want some of his hot, procreative action! Anyway, they kiss when he brings her home, but I’m far more intrigued by the… mini car driven by stuffed animals that she apparently picked up at the game? 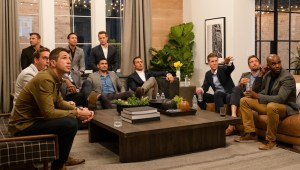 One morning after, Angelo gathers his fellow contestants in the living room and makes an announcement: “I may have been the one who told Kristy about you and Alan,” he says to Budge. “I f–ked up. I apologize. It shouldn’t have happened.” They don’t revolt, but they also don’t embrace him in forgiveness and brotherhood, either. Alan interviews that maybe Angelo isn’t “there for the right reasons.” And, oh look — it’s decision time!

Kristin Davis’ reactions to things during the next few minutes are perhaps the highlight of this episode. “They’ve lost their minds,” she says in the same tone you’d use to say “The puppy peed on the carpet again” when she sees Trent hanging out the window, trying to see into Kristy’s house as she makes her choices. It’s no Pregnant Charlotte Verbally Whaling on Big, but it’s not bad. By the time Kristy is done, Budge, Angelo, Matt and Mario are in the We Need to Talk Box.

Based on an earlier conversation, Kristy tells Budge that she doesn’t see him making compromises for the family she wants to have. She later interviews about how, with his “unwillingness to budge,” she doesn’t see a future for them. Oh Kristy. How can I count on you to pick up a crying infant when you can’t even pick up a JOKE THAT IS RIGHT THERE. She also sends home Mario, because “you want two sons, and I want healthy babies, regardless of gender.”

That leaves Angelo, who returns downstairs to crickets from the other guys, and Matt, who enters the pool room to cheers and hugs. “It’s no secret why this is on the wall,” Matt says, gesturing to the giant FATHERHOOD sign. “Think about that.” Oh good GOD.

Now it’s your turn. What did you think of the episode? Who do you think will be the next to go home? Sound off in the comments!