The Eagle Forum has landed.

Phyllis Schlafly gets both everything and nothing she wanted in Mrs. America‘s finale, which began streaming on FX on Hulu Wednesday. As any student of recent American history knows, the Equal Rights Amendment against which Phyllis so ardently railed still is not part of the United States Constitution. And by 1980/the end of the series, Republican presidential candidate Ronald Reagan has been elected to the White House, ousting the Democratic Jimmy Carter.

But these big wins for Conservatives aren’t enough for the homemaker-turned-power-broker, who desperately wants some recognition for the grassroots work she’s done for years. She’s left wanting, though: Phyllis’ excitement when the president-elect calls is quickly extinguished when Reagan tells her that the cabinet position she’d been assured she’d get isn’t going to happen. He explains that he needs to secure the backing of more pro-ERA women voters, and a deflated Phyllis sheds a tear while her husband assures her she was robbed.

The last visual we have of Phyllis is of her puttering around in the kitchen in an apron, then sitting at the table to peel apples.

But what happened to everyone else we’ve come to know over the season? Let’s see: 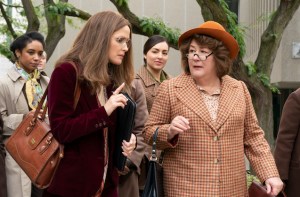 * Bella, Gloria and the rest of the National Advisory Committee for Women pressure President Carter to meet with them for more than 15 minutes, and they rejoice when they get two hours of his time. But they don’t know that Carter is planning to fire Bella as co-chair of the committee, news she finds out right after the meeting. The majority of her colleagues resign in solidarity, and a heartbroken Bella returns to New York.

* A slightly tipsy Alice watches Phyllis swan around at an anti-ERA gala and has finally had enough: She confronts her former friend about how she could counsel Pamela to coddle her abusive husband rather than offer her the help she needs. “When did you get so mean?” Alice marvels. Much later on, when the two women run into each other again, Phyllis is surprised to learn that Alice has taken a job as a 411 operator. Alice says not having to ask her husband for pin money is “empowering.” “You used to feel empowered by me,” Phyllis says. “I used to feel scared,” Alice replies, then drives away.

* Eleanor Schlafly gets hit on, and after all that talk about how she’s a dusty old spinster one step away from the old maids’ home, it’s pretty great.

Now it’s your turn. Grade Mrs. America‘s finale via the poll below, then hit the comments with your thoughts!