HBO Max at long last has arrived, and with it comes the debut of Love Life, a romantic comedy starring Pitch Perfect‘s Anna Kendrick. Were you instantly charmed by the Max Original, or will you be seeing what else the service has to offer before you commit to a second episode?

Created by Sam Boyd (In a Relationship) and executive-produced in part by Kendrick and Paul Feig (A Simple Favor, Bridesmaids), Love Life is a scripted anthology that is set to follow a different protagonist each season on “their journey from first love to last love.” Season 1 focuses on Kendrick’s Darby, a twenty-something NYU grad whose own journey begins in 2012 when she meets aspiring journalist Augie (Dev‘s Jin Ha) at a friend’s karaoke party. Augie approaches Darby and asks if she’s picked a song to sing, even though he’s already picked a song for both of them. He just wanted an excuse to talk to her, he says.

Later that night, Darby and Augie go out for a quick bite, then walk in the direction of her place. They share their first kiss, then head upstairs where they drink beers, play cards and have sex. The next morning, Augie hands Darby his phone so she can add her number, then waits several days before he shoots her a text and asks her on a proper date. In the interim, Darby stresses to her roommates about whether Augie is going to reach out, as well as who she’s going to bring to her boss’ (Halt and Catch Fire‘s Scoot McNairy) wedding. 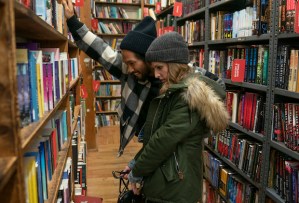 Before long, Darby and Augie are officially boyfriend and girlfriend, spending many a night at a nearby sports bar watching Augie’s beloved New York Knicks. One night, after a particularly devastating loss, Augie tells Darby that Politico wants to send him out as a political embed in a couple weeks, and he’ll be gone through the November election. If all goes well, he’ll continue to work out of the D.C. bureau, and it’s too good an opportunity for him to pass up. (“I feel like it’s my civic duty,” he tells her. “Can you imagine if Romney was president? The world would end.” Oh, Augie! If only you knew…) He tells Darby that he likes her a lot, but he’s been through the whole long-distance thing before, and he doesn’t want either of them to get hurt. They agree to keep hanging out until he leaves, though, and he accompanies her to her boss’ wedding on his final night in town.

Deep into the reception, after they’ve both had too much to drink, Darby tries to instigate a fight based on a meaningless joke that Augie made. It’s a poorly veiled attempt to mask her feelings about him leaving. Augie interjects and tells Darby that he loves her, and she reciprocates, half-heartedly. “I love you, bye forever,” she says. “You said long distance doesn’t work.” Augie then proceeds to change his tune. He says that they should try and make it work over Skype, but Darby shoots him down. She says he’ll meet someone on the campaign trail and forget all about her. Later that night, though, she apologizes for saying that, and boyfriend and girlfriend kiss and make up.

The following morning, Darby bids Augie farewell at the bus stop, marking the end of their short-but-meaningful relationship. Then, as she begins to walk away, our narrator cuts in to say that Darby’s person is still out there… somewhere. “Maybe she’s met them already, maybe she hasn’t, but they’re alive in this city and looking for her too,” the omniscient voice says. And as the 2002 version of Darby walks away, the camera moves left to reveal a future version of Darby, who is pregnant and carrying groceries down a busy street. “It’ll all happen for her, just not the way she thinks it will.”

OK, your turn. What did you think of Love Life‘s premiere? And will you keep watching? Weigh in via the following polls, then hit the comments to flesh out your thoughts.