Get your duck walks in a row: It’s time for the premiere of HBO Max’s Legendary.

The hour-long series, which premiered Wednesday, kicks off with Ballroom 101 for those of us who haven’t watched Pose. Or RuPaul‘s Drag Race. Or Drag Race All-Stars. Or Paris Is Burning. Ballroom is a community mainly founded by Black and Latina transgender women in which dancers — who organize themselves into “houses” overseen by a mother or father figure and often named after fashion designers — compete against each other. Each ball event gives the houses the chance to show off their style, from costumes to on-point choreography to next-level freestyling.

As the dancers explain the concept, they make it clear that this is no So You Think You Can Dance: For some, especially those who identify as lesbian, gay, bisexual, transgender and queer, finding acceptance (and sometimes, literal shelter) in a house was the only thing that saved them after their families kicked them out.

In Legendary‘s first season, eight houses will compete in nine balls. In each episode (except for the premiere), the judges will decide who reigns superior and who goes home. The last house standing will win $100,000. (Two episodes were released Wednesday; this recap covers Episode 1 only.)

The judges are rapper Megan Thee Stallion, stylist/former America’s Top Model judge Law Roach, choreographer/Pose actress Leiomy Maldonado (herself a founder of House of Amazon), and The Good Place‘s Jameela Jamil — whose casting caused a stir in February, with critics wondering why the gig had gone to someone with no obvious ties to either the ballroom or LGBTQ communities. (Jamil then came out as queer, tweeting that she hadn’t earlier because, in part, she didn’t want to be accused of “performative bandwagon jumping.” In the show, she’s described as “advocate and ally.”) Choreographer/Pose actor Dashaun Wesley serves as emcee.

Now that that’s out of the way, it’s time for tonight’s category: the grand march, in which houses make a statement about who they are. In the order of appearance, we see:

HOUSE OF ESCADA | Lots of red feathers and tight choreography mark Escada’s inaugural performance, but Leiomy wants more of a traditional walk from the group. “Ballroom is not about choreography, it’s about freestyle and expressing yourself,” she says.

HOUSE OF EBONY | A historically Black house with a white woman now as mother, Ebony delivers on freestyling and ends the walk with very impressive synchronized dips (or what Drag Race refers to as “death drops”). Law doesn’t like the group’s choice of fashion, however, because it doesn’t “tell a story.” 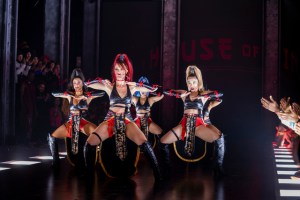 HOUSE OF NINJA | Ninja is Legendary‘s only all-female house, mother Dolores tells us, and its members hail from all over the world. After their Asian-inspired walk, Leiomy praises Ninja, pointing out that it’s an an international collective of cisgender females, and “It is very important for the world to see that ballroom is for everyone.”

HOUSE OF GUCCI | Gucci’s wardrobe choice is pretty great — one member, Delicious, wears a Marilyn Monroe-esque, “Diamonds Are a Girl’s Best Friend” type pink gown while the rest of the dancers sport skintight, short latex tuxedos — and they all seem to be having the best time up there. The judges take note.

HOUSE OF WEST | “The House of West is the cure to ballroom cancer,” father King James says during the intro package, and I don’t really know what that means, but I’m including it because it sounds cool. They’re definitely the most acrobatic group so far, and their outfits are the most high-concept — something of which Law highly approves.

HOUSE OF ST. LAURENT | This “elite” house very much thinks it is the most polished in the competition, and introduces itself with a walk that keeps most of its members’ faces covered until the very end. It was a minor sticking point for Jameela, who says she wanted more energy from them; Leiomy adds that she wanted more vogueing. House mother Miss Shalae pushes back on that one, reminding them that the category was “presentation” and she “presented my house as we are.”

HOUSE OF BALMAIN | In a familiar refrain, Leiomy wants more of a ballroom/vogueing feel from this house’s Matrix-inspired walk, but aside from that, there’s a lot of rather great stuff going on — house father Jamari’s acrobatics, especially.

WHO REIGNS SUPREME? | At the end of the episode, House of Ninja is declared the winner, but all of the houses are allowed to stay — the eliminations will begin in Episode 2.

Now it’s your turn. Grade Legendary‘s premiere via the poll below, then hit the comments with your thoughts!