Barely 15 minutes into the premiere of Fox’s new reality series, Labor of Love, an assemblage of guys mill about at a cocktail party, hoping to catch a few minutes with the lone female in attendance.

The visuals are fairly standard for anyone who’s ever tuned into The Bachelor or The Bachelorette or even UnREAL. Most of the dudes are white. All have impeccable teeth. Some wear suits, others opt for a more casual look. They all are in their 30s and 40s. They have job descriptions that range from vague (creative director) to outta-left-field (former pro-wrestler). They laugh loudly and shake around the ice in their drinks and keep an eye on the competition. You’re just waiting for the moment one of them approaches the woman — whose name (Kristy Katzmann) and face also might be familiar to Bachelor fans, because she participated in Season 11 — to ask, “Can I steal you for a minute?”

But then waiters appear, bearing specimen cups on their trays. Sex and the City alum Kristin Davis, who serves as the show’s host, appears. She informs the men that they’re going to have to, how shall we say this?, corral their swimmers into those cups in order to stay in the running to be Kristy’s sperm donor and possible true love. Then she ushers them toward a “mobile collection center” that’s parked just steps away, and one by one, the guys go behind closed doors to do their thing.

OK, Labor of Love, you’ve got our attention. 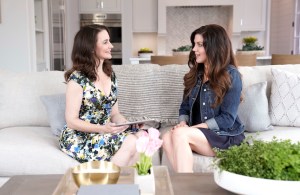 Labor of Love‘s executive producers say they wanted to create a show that would reflect a common struggle for modern women who’ve delayed starting a family. Maybe those women, like Katzmann, were in a short-lived marriage that produced no children. Maybe they spent their 20s and 30s completing their education and building a career. Regardless of the reason, EP Laurie Girion (Hulu’s Hilary) tells TVLine, “These are conversations that women all across the country are having. They’re having it with their sisters and their best friends, and so we were feeling like this is really something in the ether that hasn’t been cracked yet for television in a way that’s really broad.”

She adds that though the focus is on Katzmann and her journey to motherhood, “frankly, what we found as we dove into casting is: This is a situation that millions of men are finding themselves in, too. Nobody talks about a man’s biological clock, and people think men take it for granted. But really, what we discovered was there are a lot of men, as well, who hit this place in their life where they’re like, ‘Wow.I have my career. I have friends… How did I get here without actually having a family yet? And I really want that.'”

Though the series’ ads show Katzmann and the men going on romantic strolls and sipping Champagne by candlelight, EP Anne Walls (Project Runway) is quick to point out that the objective was to find their heroine a baby daddy, full stop. And if romance bloomed? All the better.

“It’s a journey where she has every option available to her: falling in love, co-parenting, sperm-donating,” Walls explains. “There’s millions of women out there, and men, who are going to do this their own way. But it was really important for us to give her that freedom to explore every avenue.”

In keeping with the format of other shows of its ilk, Labor of Love‘s men bunk together in a lavish Georgia home, with Katzmann living just across the way. The guys participate in drills that partially test their mettle as potential papas but mostly just serve as comedic fodder: changing diapers, getting zapped in order to experience the pain levels associated with labor, that kind of thing. Thousands of men answered the casting call, EP Spike Van Briesen (The Hills, Million Dollar Matchmaker) says, and all were completely aware that signing up might mean they’d be helping to bring a new life into the world. (However, the guys didn’t know about the sperm-collection in Episode 1 until Davis announced it. “They rolled with it,” Girion says, laughing.) 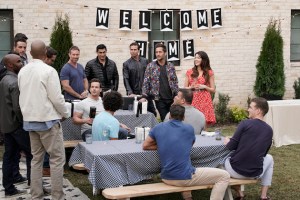 Of the 15 suitors chosen to court Katzmann, two men are Black; one is Latino and two others have partial Latino heritage. “Diversity is important, period, first off,” Girion says. “You want to not limit anybody because of any kind of racial profiling. The criteria of what we were looking for in our men — because our heroine was also open to anything and had no barriers in that way — the things we were looking for in terms of life [were] we were more concerned that they have a good job, that they had relationships with people, family or friends that were willing to vet them and all the usual kind of background-check things that you do when people are going to be on your television show. So that didn’t become an issue for us, in terms of looking for it or not looking for it. We were really out to pick the best men.”

Speaking of that vetting: Though The Bachelor and Bachelorette usually wait a while before introducing contestants’ loved ones, Labor of Love is a family affair from the start. Starting in the series premiere, Katzmann’s parents and relatives of the hopeful fathers offer interview-style commentary in segments sprinkled throughout the hour — a move Van Briesen says was inspired by the 1989 film When Harry Met Sally.

“When you are having the conversation about becoming a parent, you’re going to ask your parents about those same things,” he says. “We felt that it was just the natural course to take, to have them in there, commenting on all of the people that were in the show.”

Adds Girion: “If anything, we like to lean into the romantic comedy of it all.”