It’s been less than 24 hours since Mississippi pastor Todd Tilghman learned that he’d been named the winner of The Voice Season 18, and already, TVLine’s rung up the amiable father of eight to find out how he celebrated with his massive family, what he makes of complaints that competitor Thunderstorm Artis was robbed of the title, and whether he has plans to (eventually) raise a glass in person with coach Blake Shelton. Take it away, Todd!

TVLINE | How late did the party go at your church Tuesday night?
I think we went home about 1 a.m., then I went to bed and laid there awake until about 4 or 5.

TVLINE | Your daughter slept through your Semi-Final performance. Was the kids’ reaction to your win a little bigger?
[Laughs] Yeah. You know, I didn’t even think about it until we went from Top 9 to Top 5, but it could go either way, and my kids are sitting up on the stage and don’t really know how to handle that stuff. My 6-year-old son, he always takes my hand at the eliminations and says, “I’m scared.” I tell him, “Don’t be scared. No matter what happens, you smile and clap. There’s nobody on that screen who’s not worthy to go through.” But when we won last night, it was just… I don’t know, honestly. I think I might’ve blacked out a little bit while everyone was screaming and popping confetti. Then they were talking to me through the tablet, and I wasn’t sure how much time passed. They were like, “Hello? Hello?” 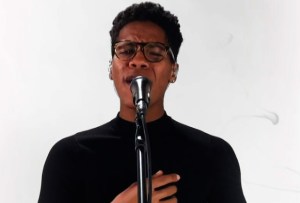 TVLINE | A lot of viewers can’t believe that Thunderstorm didn’t win. What would you say to them?
I would say to them that I can’t believe Thunderstorm didn’t win, either! He is a phenomenal artist and an even better person. As good as he seems? He’s even better than that. So I would actually probably agree with them. I don’t get it, either, ’cause he’s really great.

TVLINE | When the show was forced to go remote, did your son Eagan — a Making It maker from Season 2 — help arrange your sets?
Eagan has proven to be invaluable to me his entire life. He’s 20 now, and I tell him all the time I appreciate him loving me like he does, because we sort of grew up together. I’m sure I didn’t always make the best decisions as a dad. Through all of this, he’s been incredible. Even the stage for “I Can Only Imagine” with the lamps… The show gave us a concept, but he set it all up. He has really, really proven just invaluable to me. But honestly, if you ever met him — or any of my kids, really — you’d find out that even if he wasn’t very creative, you would still just really love him. He’s a great kid. 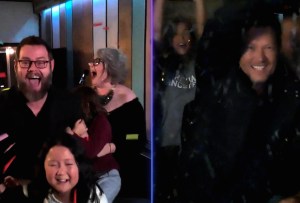 TVLINE | Are you and Blake making plans to get together and have a beer when we’re all sprung from quarantine someday?
We do have plans to get together, but we don’t have set plans. He invited me out to Oklahoma. I was like, “You know I’ll be there tomorrow night!” I love a lot about Blake, ’cause he seems like me. He likes to laugh and have a good time. There’s a time to get to work and be serious, but there’s also time to say “We don’t have to take this too seriously, let’s just move forward.” So as soon as we get an opportunity, we for sure will get together.