Though The Voice ended Season 18 Tuesday with a Final Five instead of its usual Final Four, based on your voting in the polls that followed Monday’s recap, there were really only two contestants in the running for the win: Team Nick Jonas’ Thunderstorm Artis and Team Blake Shelton’s Todd Tilghman.

The former, we all seemed to agree, is a true artist, a song stylist who uses his pipes the way a painter does his brushes. The latter, I think we also agreed, is just a swell singer whose sincerity gives him an unexpected edge. Which of them emerged victorious? Better fill your Kelly Clarkson Wine Goblet™ because before we answer that question, we’ve got about 100 performances to review. Starting with…

Um, Everybody, “Let My Love Open the Door” | Contestants and coaches present and past (CeeLo Green, Shakira, The Comeback Stage’s Bebe Rexha) started off the show with a spirited cover of the Pete Townshend classic that, honestly, sounded better than it had any right to. I know we complain about the sound on the show a lot, but that was pretty damn good. (Also, how amazing was Shakira’s lighting?)

John Legend, “Theme From Cheers” | During a Happy Hour segment — goblets up, y’all! — the VEGOTSMA winner treated us to a goofy, tuneful version of “Where Everybody Knows Your Name” that tweaked the lyrics to reflect Season 18’s strange, strange circumstances.

Jonas Brothers Feat. Karol G, “X” | First of all, cool graphics — dancing cell phones! Second of all, hotness! The odds of resisting this earworm were about as bad as the odds of resisting an offer to refill your wine goblet. (Or is that just me? Er, and Kelly?) 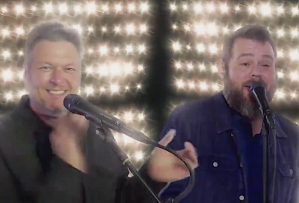 Duet With Coach
Todd Tilghman and Blake Shelton, “Authority Song” — Todd’s Grade: A | Maybe it’s just the goblet talking, but I think I actually preferred Todd’s raspy vocal to his superstar coach’s on their rollicking John Cougar Mellencamp team-up. At this point, I may not even be mad if Todd beats Thunderstorm. Well, not too mad, anyway. I mean, the guy’s good!

John Legend, “Conversations in the Dark/All of Me” | Giving an impromptu remote mini-concert to members of the staff of St. Francis Medical Center, John sounded like… well, his surname. No surprise there, eh? Wonder, though, why the doctors and nurses couldn’t have had seats for the performance. Hadn’t they been on their feet enough?

Lady Antebellum, “Champagne Night” | Technically, it’s a red-wine night. Nonetheless, the country stars packed a lotta fizz into their Songland-hatched hit and delivered a performance that felt like nothing quite so much as a fun hang. 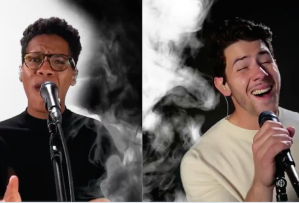 Duet With Coach
Thunderstorm Artis and Nick Jonas, “You’ll Be in My Heart” — Thunderstorm’s Grade: B | Hmm… creative as it might have been to dramatically rearrange Phil Collins’ Tarzan theme song, it didn’t actually serve Thunderstorm terribly well. His husky voice wound up getting a bit drowned out by the rhythm section.

Blake Shelton and Gwen Stefani, “Nobody But You” | I guess I should expect that two vocalists as talented as these lovebirds would sound terrific together. But I was still taken aback anew by this reminder that although he’s a little bit lotta country, she’s a little bit rock-’n’-roll, they pair like peanut butter and chocolate. (Again, though, why did the food-bank staff for whom they were singing have to stand?) 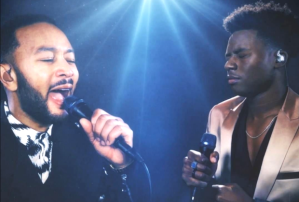 Duet With Coach
CammWess and John Legend, “Rocketman” — CammWess’ Grade: A- | Ooo, from the first note, I was like, “Now this is the CammWess that could’ve won the show!” His vocal was so rich, it could’ve been freaking icing! And he demonstrated better control than he had Monday night — or perhaps he just stuck closer to Elton John’s melody than he had Prince’s on “Purple Rain.” In any case, this sent me into orbit. (See what I did there?)

Kelly Clarkson, “I Dare You” | Credit where it’s due: Kelly’s new single sounded powerful in all six of the languages in which she sang it. When she was done, Carson Daly cracked, “I got a C+ in Spanish; you showed us all up there.” Hey, Carson made an actual joke! 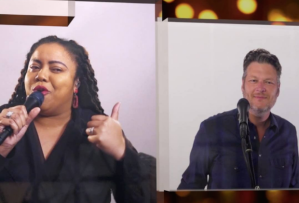 Duet With Coach
Toneisha Harris and Blake Shelton, “Don’t Stop” — Toneisha’s Grade: A | Seriously — is there anything that Toneisha can’t sing gorgeously? Here, her powerful pipes barreled through Fleetwood Mac’s golden oldie like a freight train through a tunnel. And to be clear, a freight train that sounded sublime, not just, like, you know, a train. I only wish her original single had had this much energy. 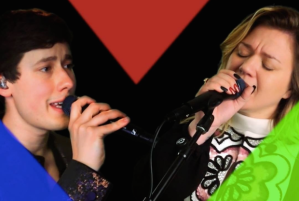 Duet With Coach
Micah Iverson and Kelly Clarkson, “I Run to You” — Micah’s Grade: B+ | Micah kicked off the number with a note that called to mind Chris Isaak — where’d he been hiding that all season long?!? As his and Kelly’s Lady Antebellum cover went on, he sometimes faded like a pleasant background singer for his coach. But when you could hear him, his performance was actually among his strongest of the season. Maybe country-pop should’ve been his lane all along.

A Whole Buncha Familiar Faces, “What the World Needs Now Is Love” | Recent and not-so-recent contestants including Kevin Farris, Lauren Duski, Jacob Maxwell, Alexa Cappelli, Jake Hoot, Mike Jerel, Ricky Duran and Britton Buchanan joined forces on a rendition of the beloved ballad that was made about 1,000 times more perfect by the adorableness of Kevin’s music-class moppets.

Nick Jonas, “Until We Meet Again” | If anyone didn’t know before that the new coach on the block has a falsetto for the ages, they do now. Soulful as hell.

Bon Jovi, “Limitless” | Holy crap, how long has it been since I’ve seen Jon Bon Jovi? He’s as gray as Meryl Streep in The Devil Wears Prada! In unrelated matters, if the guys’ new single isn’t on a soundtrack, it oughta be; it was made for a montage.

So, are you satisfied with the outcome? Surprised? Sound off in the comments below after grading the season as a whole.