Given that my theories about the identities of The Masked Singer‘s remaining contestants haven’t changed much in a while, I expected the show’s Season 3 finale to be a bit of a snooze. What surprises could the reality series possibly pull out?

A big, purple, winged one, apparently.

Though I was sure the crowd-pleasing Frog or the boy-bandish Turtle would walk away with the season’s top prize, Night Angel wound up nabbing the Golden Mask and becoming the first female winner in the show’s three-season history.

We’ll get to revealing all of their identities in a moment. But first, a quick run-through of their performances: 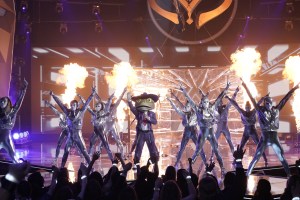 FROG | The amphibian started the show strong with P. Diddy’s “Bad Boys for Life,” which featured pyrotechnics and a huge troupe of backup dancers. As judge Robin Thicke put it: “He’s never out of breath, he nails his dance moves.” Those feats, along with the fact that the audience would’ve followed him into war, made for quite a final outing. (My guess: CSI: Cyber alum Shad “Bow Wow” Moss)

TURTLE | Lewis Capaldi’s “Before You Go” was Turtle’s final outing, and he delivered on the promise that he made the week before: The performance was captivating and solid. This might’ve been the best Turtle sounded all season, too? (My guess: Summerland alum Jesse McCartney) 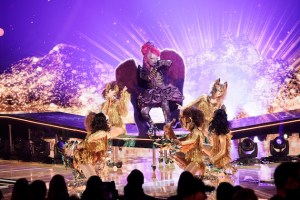 NIGHT ANGEL | Some of the heavenly being’s song choices this season felt a bit out of her range, but Tina Turner’s “River Deep, Mountain High” was riiiiight in her vocal sweet spot, and she owned it. She gave a really strong performance that rounded out her season in the best way possible. (My guess: Real Housewives of Atlanta‘ Kandi Burruss)

Now it’s your turn. Grade the finale and the season overall via the polls below, then hit the comments with your thoughts: Were you as surprised as I was by how things shook out?