Legends of Tomorrow‘s next time-traveling adventure will take the Waverider team through television history.

In the May 26 episode (The CW, 9/8c), Charlie tries to protect the Legends from her sisters by “scattering them in different television shows,” including Star Trek and Downton Abbey, as seen in newly released photos. (A trailer also hinted at a Friends parody.) “Of course, in true Legends style, some can’t just be blissfully ignorant and happy, but figure out a way to end up messing with the system,” per the official synopsis. 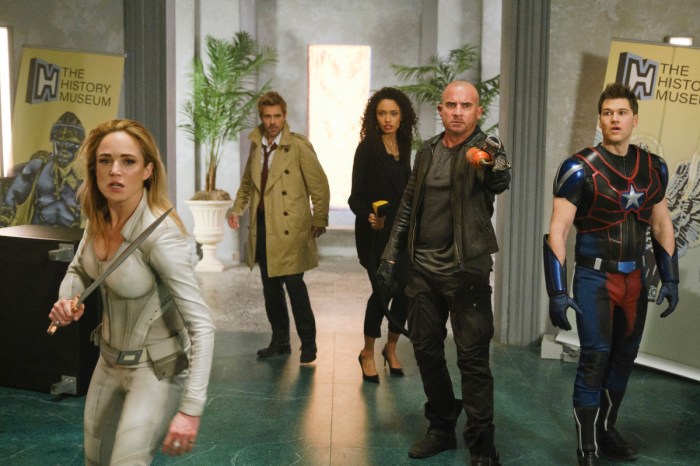 The ambitious installment marks the directorial debut of Arrowverse executive producer Marc Guggenheim, who earned nothing but raves from the cast. “That’s one of the best episodes of our series!” star Nick Zano (aka Nate Heywood) enthused to TVLine. “It was also one of the hardest episodes we’ve ever made. However, it was so much fun. Guggenheim killed it… He made some creative choices that were practical that some people save for editing rooms, [but] he did it on the floor, which was kind of fun and interesting, and it challenged everybody in a very productive way. That episode is phenomenal! I love that episode.”

Scroll through the attached gallery (or click here for direct access) to get a first look, then hit the comments with your thoughts on the Legends antics!