Buck and Abby’s reunion on last Monday’s 9-1-1 finale may have been difficult to watch (so bittersweet!), but it was a behind-the-scenes joy for star Oliver Stark.

“Getting to work with Connie [Britton] again was really lovely,” Stark tells TVLine. “It felt like old times. There was no adjustment period, we just jumped right back into that working relationship. I was super excited when I first heard there was a possibility of her returning.”

Buck was similarly excited to see his ex-girlfriend back in Los Angeles, even if saving her new fiance from a mass-casualty train wreck probably wasn’t the best way for him to find out that she moved on. Between that fiery encounter and the duo’s devastating heart-to-heart overlooking the city, the chemistry remained; Stark says it felt like no time had passed.

“The first time around, I don’t think it took too much work,” Stark says, thinking back to Buck and Abby’s original Season 1 chemistry. “It just happened, and it was there. So it was really fulfilling to see that it still worked the second time around. They had some really lovely scenes. They weren’t the easiest on Buck, emotionally, but it was a really fun thing to get to shoot.”

In terms of crafting those dramatic scenes, showrunner Tim Minear tells TVLine, “As a fan of the show, while I wanted a great reunion between Buck and Abby, what I was really hungry for was a moment for Buck to go, ‘Why didn’t you call me?! What the hell happened?!’ … Buck feels mature to me at the end of that story. He feels like a guy who realizes that a chapter is over. It did them both some good, and he can’t be angry at her.” 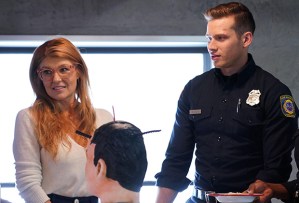 And while we’re reflecting on Buck and Abby’s ill-fated romance, who’s up for a trip down TVLine Memory Lane? Our first interview with Stark was back in Jan. 2018, ahead of Buck’s first date with Abby, a task he called “exciting and daunting.”

“I was actually a little nervous for it,” he said. “Like, it’s Connie Britton. What if I’m rubbish and she’s like, ‘What are you doing?’ Fortunately, the first-date pressure is taken out a little bit because they’re essentially on a job. They have something else to focus on, but you still get these little undertones of ‘Oh, hi, we’re actually here.’” Simpler times.

Now that we’ve had a week to think about it, how do you feel about the way things ended between Buck and Abby? Drop a comment with your thoughts below.