The mother of Logan Williams, the 16-year-old actor whose TV credits included The Flash (as Young Barry Allen) and When Calls the Heart, has revealed the cause of his death on April 2.

Marlyse Williams told the New York Post that according to preliminary toxicology tests, her son died of a fentanyl overdose, following his three-year battle with addiction.

“His death is not going to be in vain,” Marlyse Williams told the Post, expressing her mission to raise awareness of the opioid epidemic. “He’s going to help a lot of people down the road.”

Logan Williams made a total of seven appearances on The Flash, beginning with the CW series’ pilot. He last appeared in the Season 2 premiere, when he was age 12. Soon after that, he appeared in an episode of Supernatural — all the while juggling a recurring run on Hallmark’s When Calls the Heart, where he played Miles Montgomery.

Williams’ mother said that when auditioning became “way too stressful,” that was when Logan began experimenting with drugs, beginning with marijuana; she is uncertain when it progressed to fentanyl. In recent years, she remortgaged their home to send him to treatments centers in the United States and then British Columbia.

Marlyse Williams last saw her son on March 30, when they shared dinner three days before his death. “He said to me, ‘Mom, I’m gonna get clean, I’m going to get better. And I want my new life to start,'” she remembers. “I just know the last thing we said to each other was, ‘I love you.'” 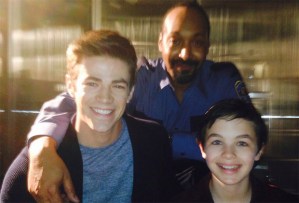 John Wesley Shipp, who played Williams’ dad in the flashbacks, likewise was “heartsick” to hear the tragic news, saying, “[Logan] was 100 percent committed to playing young Barry Allen, and we missed him once we moved past that part of the story.”