The following post contains spoilers for The Blacklist‘s Season 7 finale. Proceed with caution!

The Blacklist fans saw a completely different side of Elizabeth Keen on Friday — and we’re not just talking about her decision to side with Katarina Rostova and embrace her inner darkness.

Rather, we’re referencing Liz’s new look as a graphic novel character, which resulted from the show’s decision to animate the parts of its finale that couldn’t be filmed when production shut down. Since the coronavirus pandemic cut The Blacklist‘s seventh season short — turning Episode 19 (out of 22) into the season finale — Friday’s episode was not only a makeshift conclusion, but an hour of television that jumped back and forth between live-action scenes and animated sequences.

During the episode, Liz was forced to officially pick a side between Reddington and Katarina Rostova, after the task force’s latest case put her smack-dab in the middle of those two. In a move that initially seemed to take Liz herself by surprise, she chose Katarina; by the end of the hour, though, she had completely accepted this new alliance, even revealing to her comatose grandfather (the late Brian Dennehy, in his final appearance) that “anyone who is in [Katarina’s] way is in my way. That includes you, and that includes Reddington.”

Meanwhile, Red’s ongoing health issues — cerebral edema, Red’s doctor told Liz — took a turn for the worse, prompting him to collapse mid-conversation. His doc prescribed new meds for the hand tremors, but he also urged Red to be more honest with Liz about his medical concerns.

Below, series creator Jon Bokenkamp shares how the half-animated finale came to be, while teasing how that final scene sets up the previously announced eighth season.

TVLINE | How did you land on graphic novel-style animation for this episode? Was that driven by the show’s existing comics, or did it seem easiest from a technical perspective as opposed to other animation styles?
We’ve always talked about The Blacklist being a bit of a comic book. We’ve got a criminal anti-hero at the center of the show. A rogues’ gallery of criminals each week. The show has a slightly alternative graphic novel feel to it that’s baked into what we do week to week. So when we started kicking around ideas for how to complete the season, we looked back at the comic books written by Nicole Phillips, and an animated approach felt very organic.

TVLINE | Did you have to make any tweaks to the script in order to accommodate the animated scenes? Less dialogue, longer pauses, anything like that?
We made some slight adjustments to the script, mostly trying to expand concepts that we otherwise wouldn’t have been able to execute on our tight production schedule. For example, there’s a scene with three characters in the back of a car, racing through the city. In live action, that would have been shot with green screen and we’d be lucky if we ever popped outside of the car. However, with animation — and working with [visual effects company] Proof — we realized we had an opportunity to open that scene up. We jump outside the car to see the vehicle careening through the streets, cars whizzing past, horns blaring. That’s the kind of thing we would never have been able to do where we shoot in New York City.

Another example, we had a scene between Red and Liz where he gives her the case of the week. Originally, this was to be filmed on our stages in Red’s secret apartment. But when we realized we were animating things — that we hadn’t shot that scene yet — we thought, “Why not move this scene to the National Mall in Washington, D.C.? Let’s see the Capitol Building in the background. Big, sweeping, wide shots.” Most of the changes we made to the script were adjustments to open up the visual palette of the show and make things bigger and more fun. 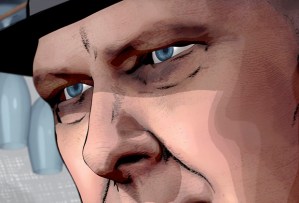 TVLINE | As you were putting this finale together remotely, did you hit any big production roadblocks? Anything that you simply couldn’t make work or had to cut because you were working from home?
We really didn’t. The cast all recorded their lines remotely on microphones that were sent to them wherever they were quarantining. They recorded their dialogue into their phones, through an app, and uploaded those lines to our post team in L.A. We had animators working in London and Atlanta. Editors, the sound team, and our composer were in Los Angeles. The whole thing was a very virtual experience, but I was really impressed at how quickly and seamlessly the team pulled together to get their specific job done. The truth is, I think we all welcomed the distraction from what’s going on in the real world.

This episode really highlights what an incredible family we’ve built over seven years. To make an episode of television like this, in five weeks, with everyone working from home — from our writers and editors, to our composer, to the sound team and visual effects crew and animators we only just met — we really couldn’t ask for a better team. We see a few of these folks in the end of the episode, and there are many more behind the scenes, but they really are the best in the business, and one hell of an incredible family.

TVLINE | I’m really intrigued by Liz’s decision to fully side with Katarina at the end of this episode, especially how easily she embraces a darker side of herself. Can you shed some light on why Liz went in that direction? Is she really as anti-Red as she seems to be in that final scene, or is she perhaps trying to convince herself that she is?
Well, keep in mind, Liz has been on this journey for seven years and gotten no real answers from Red. I think she’s reached a tipping point. And she saw Katarina sacrifice herself not once, but twice in this episode. First, Katarina was willing to race Reddington to his secret medical facility, and she saved his life when she could have captured him. Plus, she allowed the wire transfer to go through, essentially giving Reddington information about her whereabouts. She only did this to protect Liz, again sacrificing herself for her daughter.

And Katarina has tangible truths about Reddington that she’s unearthed. She mentioned the Sykorski Archive. This is a big lead — one that offers the first real glimpse into who Reddington is and why he entered Liz’s life. Believe me, the Sykorski Archive will come back into play next season. I guess all that is a way of saying that I think Liz is justified in crossing this Rubicon. She’s always feared making this leap, but finally, after seven years, she knows that embracing this darker side of herself is inevitable.

TVLINE | It feels like Liz’s decision to support Katarina instead of Red would alter the fabric of the show quite a bit. Can you speak to how the show might change next year, given this big shift for her?
I don’t want to spoil anything. I think it’s best to simply acknowledge that, yes, things are going to change in a really compelling way.

TVLINE | What can you say about where Red’s health issues are going? Should we expect those to loom large in Season 8, as well?
We’ve hinted at Red’s health issues for a few seasons now. I suppose it’s fair to say that whatever is wrong with him — it’s something that Red is avoiding or denying, yet something serious enough that people in Red’s life, like Dembe, are legitimately concerned about it. Red’s not a weak guy by any means, but these health issues aren’t going to go away, and he won’t be able to continue to deny them. It’s absolutely something we plan to explore next season.

Blacklist fans, what did you think of the half-animated finale? Cast your votes in our polls below, then hit the comments with your reactions!