Swamp Thing has found himself a new swimming hole, over on The CW.

The home of the Arrowverse announced on Monday that it has acquired the DC Universe streaming service’s one-and-done Swamp Thing comic book adaptation, which wrapped its 10-episode run back in August.

Additionally, The CW has acquired both seasons of CBS All Access’ freshly cancelled Tell Me a Story anthology (as first reported here), two seasons the CBC drama Coroner, and the six-episode first season of the UK comedy Dead Pixels. The two latter shows will be making their Stateside debut via The CW.

No timetable for CW premiere dates was announced.

The CW’s moves come as broadcast-TV networks scrambles to stock their shelves with already produced content from other outlets, seeing as production remains shut down by the pandemic. (For example, Fox’s just-released fall schedule has an hour filled by the first season of L.A.’s Finest, which first aired as a Spectrum Original.)

Tell Me a Story, whose first season was written and executive-produced by The Vampire Diaries‘ Kevin Williamson, takes the world’s most beloved fairy tales and reimagines them as a dark and twisted psychological thriller. 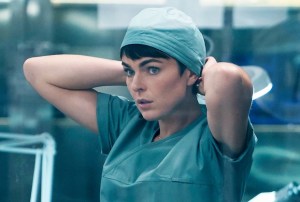 Which CW newbie are you most looking forward to?