Talking to Outlander‘s Lauren Lyle is unexpectedly and extremely comforting in these quarantimes: Turns out that, thanks to some detailed behind-the-scenes lessons, all of that animal-cleaving and skin-suturing she did onscreen as Marsali in Season 5 is now part of her permanent repertoire.

Which means Lyle is someone you’d want to know in the event of an apocalypse.

“I’m proud of myself, the amount of skills I’ve learned this year, in terms of the sewing and the butchering,” the actress tells TVLine. “I mean, if you and I were out hiking, and you got your leg cut open on a rock or a bush, I think I would know how to keep you safe and stitch you up and get you back to a hospital in time without you dying on me.” She chuckles. “I can hunt you an animal, I can cut it up, I can do all that, and then if you can hurt I can fix you. And that’s all just because of this year.”

Lyle’s on-screen alter ego proved equally useful in Sunday’s season finale, in which she got vengeance on Lyle Brown for raping Claire by injecting him with hemlock and killing him. (Read full recap here and hear what series star Caitriona Balfe and executive producers Matt Roberts and Toni Graphia had to say about the harrowing hour.) So naturally, we wanted to give Lyle a long-distance high five and talk about pregnancy pads, more Marsali/Fergus time in Season 6 and more.

TVLINE | Marsali takes some very definitive action near the end of the finale. How much do you think she thinks about killing Lionel Brown before she does it? Obviously, she needed time to steep the hemlock, so —
It’s not impulsive. 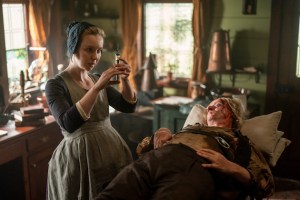 TVLINE | Exactly. But then afterward, she seems to realize what she’s done. Talk me through how long that choice is brewing within her.
A lot of what Marsali is about this season is protection and really having found her place and her meaning on the Ridge. She lives in a time where for women it’s not — for everyone, but especially for women — it’s not easy. It’s really rough and tough. You have to fight to stay where you are and to have your place, and Marsali is in a relationship with Fergus where it is equal, and she knows that she should be treated [well]. And so when the whole kidnapping happens, that’s her… other mother that’s been taken away. When it comes to your mom, you have to protect, and I certainly feel that. 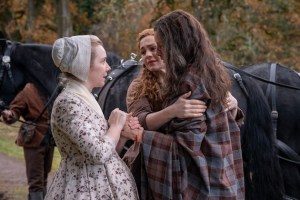 We spoke about the fact Marsali feels privileged and honored that Claire trusts her so much to be in the room with her, and we’re now at a point where Marsali knows what she’s doing in the surgery. She’s able to hold her own, and Claire can’t be in the room and can’t handle being around Lionel that she has to leave. Marsali goes on to have the man that essentially starts tearing her family apart directly threaten Marsali to her face, that he will kill her, her family, her mother, everyone. Marsali’s at a point where she has two options: Either do nothing and hope for the best, or you protect her and have the knowledge that you’re doing exactly what needs to be done.

…It’s not impulsive, it’s not irrational. It’s doing what she feels responsibly needs to be done… She’s not the kind of person to go running to daddy and tell him to do it. Instead, she’s apparently capable. She butchers animals, she protects the land, and she does what needs to be done, and she’ll take the responsibility and do it herself. Then after it’s done, it’s less about, “Oh no, what have I done?”  and more… an interesting sneak-peek into how your mind would be in the 1700s. She believes in God, she’s a woman of God, [she believes in] ghosts, witches, all this sort of thing. It’s all about the fact of, “Will he haunt me? Am I going to Hell?”

I imagine, yeah, the shock of doing something like that would be huge, but the reassurance from what is her father figure, I think, reassures her that it was the right thing to do in this context… [Claire] has taken her oath but the rest of us haven’t, so I think we almost feel a responsibility over it. 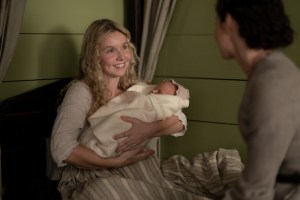 TVLINE | True to the books, Marsali is a baby factory this season. It feels like you’ve worn a pregnancy pad for most of your time on the show.
Yeah, I have! In Episode 1, I think, I didn’t have one, because it was meant to be that [Marsali] just figured out [she] was pregnant, so [she] wouldn’t be showing anything yet. But basically from then there is some form of bump, like a two-month, three-month, four-month, like even when you can’t really tell, there is something. There was, like, a cushion, and it would just grow and grow and grow into what became the biggest thing I’ve ever worn in my effing life. [Laughs I’m quite a petite person in height and stature, and therefore the nine-month bump was like carrying a litter of kittens, it was so massive. [Laughs]

…The thing I’m proud of is that doing everything that Marsali did while she was heavily pregnant, and also that thing has got weight. It’s not just a big cushion. You’re so tied into the whole thing. It takes ages to get on and off, all the skirts and everything. The skirts are so heavy, and the whole thing generally is heavy anyway, plus I’m holding a baby in each arm most of the time, as well. I feel quite fit from it. [Laughs] I’m quite fit from the whole thing. I thought it was quite an iconic image: Butchering some animals and killing some guys while pregnant, as big as she was, is pretty badass.

TVLINE | Obviously, Marsali and Fergus have had a lot of alone time, but we haven’t seen them together onscreen all that much. Have you and César had any discussions with the producers about whether that will change in the upcoming season?
We haven’t got right into the details of next season just yet. [Laughs] César just texted me. Literally, I’m looking at a text from him right now, because we speak constantly and we’re always in contact. We speak, I think, on the phone almost every day, and so we’re always talking about it… We love the fact that they’re one of the only couples that don’t fight that much, and we don’t argue that much. I mean, there’s stuff I can’t really talk about. I do know some stuff is going to happen with them next season that’s very much them together, so that will happen, but it’ll be a totally different situation to what you’ve seen them in before.