As the block party at last got underway in Sunday’s Insecure, s— didn’t just get real, it got real ugly. So much so that, by the time the episode way over, it was just as well that Issa and Molly weren’t on speaking terms, because anything they said to one another would’ve been considered fightin’ words. Read on for all the deets… 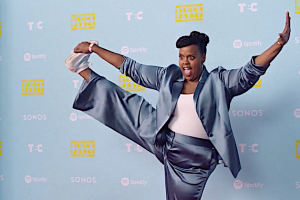 ‘I LOVE HER, BUT I DON’T REALLY LIKE HER RIGHT NOW’ | Starting in the wee hours of the night before the block party, “Lowkey Movin’ On” kicked off with a sleepless Issa reaching out to Nathan and copping to being “scared I shut down Market Street for no reason… and it’ll be the one day it rains in L.A.” Why was he up so late? Couldn’t sleep, he said, and Andrew was at Issa’s girl’s. “I don’t know if I’d call her my girl. Honestly,” said Issa, playing the Season 4 premiere scene that we’d been anticipating, “I don’t f— with Molly anymore.” And she’d soon f— with her even less. On the day of the block party, Molly acted with Andrew as if she wanted to punish Issa by being a no-show. And Molly would’ve had just cause, too. When she’d won a big case, Issa hadn’t come to her victory bash, and Molly had preordered a seafood tower for four. “That is a lot of mercury for three people,” she noted. In the end, of course, Molly was going to go; she just had to be conflicted about it first.

As the doors opened on the event, Issa, when not dealing with problems ranging from a vendor triggered by bass to a broken table leg, spotted the equivalent of a ghost: Condola. Issa hadn’t even known if her partner in the block party was going to come. “Lawrence didn’t tell you?” asked Condola. Uh, no. What? “That we broke up.” When their brief, cordial exchange was finished, so, it seemed, was their friendship. And Issa’s day hadn’t even begun to get really trying yet. Things looked up for a hot second when she hooked up with her crew, even Molly. “Of course I came,” she said. “I’m your best friend.” And Kelli’s need to pretend to be English for new boo Darnell was a comic relief. “I faked an accent when we met,” she explained, “and now i have to commit.” But Issa’s problems multiplied faster than her solutions. Headliner Vince Staples was nowhere in sight, Issa’s display of African-American excellence had drawn an almost entirely white crowd, and “did you hear it’s supposed to rain?” asked Ahmal. Ugh! 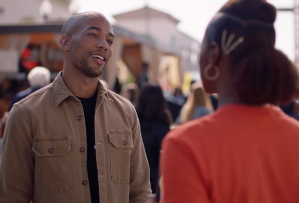 ‘SOMETIMES SHE JUST DON’T F— WITH PEPPA PIG’ | When Derek went home because the sitter reported that Simone wouldn’t stop crying, Tiffany eagerly stayed behind. She wasn’t breastfeeding anymore, anyway. (“Didn’t take. Her loss.”) Nearby, Ahmal delighted in razzing “Englishwoman” Kelli, who declared that she was from the Poppycock region of Britain and was really more interested in discussing American politics. There’s two branches, explained Darnell, bless his idiotic heart: the presidential branch and the bank branch. “It’s called Bank of America.” Taking the words out of our mouths, Ahmal quipped, “You’re special.” And then some. Enjoying the festivities, Andrew suggested to Molly that maybe she and Issa had been “off” lately because, obviously, Issa had been working like crazy. Having once dodged Andrew for her job, Molly had to empathize with that, right? If only for a moment, it seemed like we might be headed for an Issa/Molly detente. Molly even brought Issa a snack… though the party planner was quickly pulled away to greet Vince Staples.

When Nathan arrived, looking as fine as ever, he reminded Issa that she’d come up with the whole idea for the block party back at Coachella. (Lawrence, no doubt wary of running into Condola, did not put in an appearance.) As night fell, the whole crowd got to wobbling, and Issa and Molly had fun, actual fun, together for the first time since… what? Maybe since their first self-care Sunday this season? And it was lovely to see. It was also short-lived. After Vince Staples’ performance, Molly learned that Nathan had asked well-connected Andrew to convince him to perform at the block party. “I didn’t think you’d be mad that I helped your best friend,” said Andrew. “What is the issue?” Oh, buddy, how much time do you have? Molly made a beeline for Issa and lit into her for going behind her back to get Andrew to do her a favor. Before they were done accusing each other of being everything from f—-d-up to arbitrary to a shady user, someone in the crowd mistakenly believed one of them was reaching for a gun, and everybody panicked and dispersed. “N—-s can’t have nothin’,” cried one party-goer.

‘I SHOULDA DROPPED YOUR LYING ASS A LONG TIME AGO’ | As “Lowkey Movin’ On” drew to a close, Andrew apologized to Molly if he’d done anything wrong. She clearly wasn’t mad at him, though. Back at the party, or what remained of it, Issa sent Tiff and Nathan home… just as it started to rain. So… that was painful, yeah? What did you think of the episode? And who do you think was right in Issa and Molly’s big face-off? Vote in the poll below, then hit the comments with your advice for the estranged besties.