The following story spoils a major twist in the second episode of Dead to Me Season 2 — proceed at your own peril.

Dead to Me didn’t wait long to deliver Season 2’s first jaw-dropping plot shocker. In the final moments of the Nextflix comedy’s riotous premiere (read recap here), Jen (Christina Applegate) and Judy (Linda Cardellini) are greeted by a man who looks exactly like Judy’s ex, Steve (James Marsden), aka the dude who Jen — just hours earlier — murdered in her backyard. The best frenemies quickly learn (well, Jen learns; Judy already knew) that the dead man walking is actually Steve’s “semi-identical” — and far more affable — twin Ben (also played by Marsden), who has come to town to get to the bottom of his brother’s mysterious disappearance.

Below series creator Liz Feldman reveals the origin story behind the soap opera trope-y twist, which she herself initially deemed “ridiculous and stupid.” 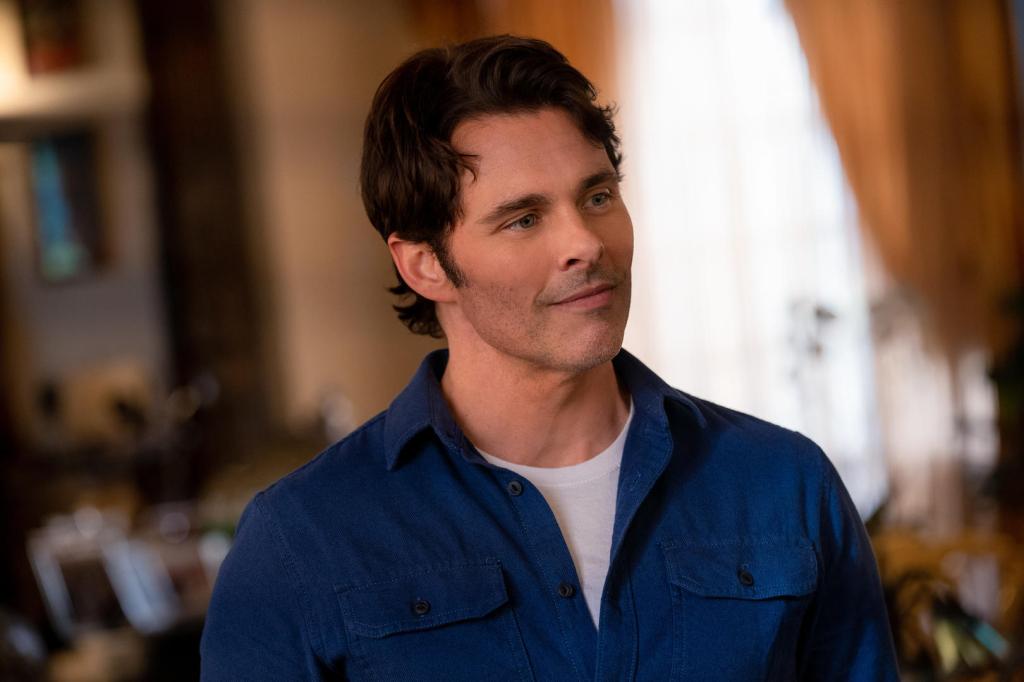 compelling and so funny and dark, he is a wonderful human being and an absolute joy to work with. After [Season 1] premiered last year and we were starting to get some nice feedback, James sent me the most sweet and darling email saying how great it was to work together. He’s just a total class act. And at the end of the email he was like, “I don’t know if there’s any way somebody can survive a traumatic brain injury and drowning, but if there is I’d be down.” I shut my laptop and started pacing around my house thinking how crazy it would be to not try and find a way to work with him again. I didn’t want to bring [Steve back from the dead] because that would be crazy. Also, I didn’t want to undermine the [Season 1] finale. So, of course, what popped into my head was, “He has a twin!”

TVLINE | What was your initial reaction to the mere idea?
I immediately started laughing out loud to myself about how ridiculous and stupid that was. What an insane cliché to bring into this show. It’d be like something ripped out of a telenovela storyline. But it kept making me laugh so much. And the next day I sat down and had lunch with Kelly Hutchinson, who is one of my best friends and a writer on the show, and I told her about James’ incredibly kind email. And literally we just looked at each other and at exactly the same time we said, “Twins?” [Laughs] And we immediately started laughing. And then I told her I had thought of the idea [the day] before, but I didn’t dare say it out loud because I didn’t want to be fired from show business. [Laughs] But the more I started thinking about it the more [other] ideas started coming off of it. I liked the challenge of bringing in a twin but keeping it grounded. I wanted to do it in a way that still felt grounded and real and hopefully, after a couple of episodes, you almost forget [James] is playing both parts. And I think because we were riding on the strength of James as an actor we pulled it off… In the hands of a lesser actor it would be a terrible idea. I knew he had it in him to play something completely opposite [of the villainous Steve].

TVLINE | And you sort of acknowledged, via Jen’s reaction to seeing Ben, that the twist was preposterous. It felt like the show was in on the joke, and winking to the audience a little.
I always try and keep a sense of humor about the show. I never want the characters to be taking themselves too seriously. I don’t do that in my life. I’m the first person to say, ‘”What a ridiculously stupid idea… but… how fun!” If we’re going to do it then we’re going to make fun of ourselves for doing it.

TVLINE | So what happened next? You call James?
First we had to pitch it to many other people. We needed [CBS Television Studios] to get on board. We needed [Netflix] to get on board. But when I called James and pitched it to him — God Bless James Marsden — he was like, “Yep, that sounds great. Hilarious. I’m in.” It was important to him that the character be a completely different person, [thus allowing him] to draw out a different side of himself as an actor; he said yes with integrity. [Laughs] It was a great challenge to carve out this new person who could help drive story for us but who also felt like a real human being going through the loss of his brother.