The following post contains major spoilers for Dead to Me‘s Season 2 premiere, as well as the first scene of Episode 2. Proceed with caution!

A massive secret nearly destroyed Jen and Judy’s Dead to Me friendship last spring… and it’ll be a different massive secret that brings the women back together.

The Netflix comedy returned for Season 2 on Friday, bringing with it new twists, fresh faces and, most importantly, more Facts of Life binges. Before you tell us what you thought of the premiere, let’s break down what happened in “You Know What You Did”:

The episode picks up the morning after Steve’s unexpected death, and Jen and Judy look nauseated as they try to pretend everything’s normal. (When Jen’s sons astutely ask why the pool is suddenly covered, Jen and Judy lie that a dog died in it the night before… and hey, they’re technically not wrong!) But even though the women spent all night together, trying to conceal Steve’s murder, Jen doesn’t think this bonding experience makes them friends again. She merely wants Judy to confirm that she’ll never breathe a word of what happened to Steve — and when Judy does that, Jen breaks up with her for good.

Judy, however, doesn’t actually have anywhere to go. She tries to lock down some lodging at the assisted living facility where she works, but the bedroom left vacant by her late friend Abe is no longer available. It now belongs to a new tenant named Flo, who is dropped off at the facility by her daughter, Michelle (played by Parks and Recreation’s Natalie Morales). Flo isn’t all that pleasant to Judy upon her arrival, but Michelle, fortunately, is warmer; she even returns a cigar box to Judy that she suspiciously found in the box spring of Abe’s old bed. Overcome with relief, Judy opens the box to find some marijuana, a drawing of Abe that she did when he was alive and, best of all, the keys to Abe’s car. “Thank you, Abe,” Judy beams after getting in the vehicle, hugging the steering wheel as the engine runs.

Meanwhile, Jen is busy trying to erase any evidence of what happened to Steve the previous night: She vigorously cleans the ground next to the pool, dismantles her security camera system, lies to her neighbor Karen that she was having sex with Steve and not arguing with him, yadda yadda yadda. But Jen is stunned to learn that Karen has a street camera attached to her house, which offers crystal-clear security footage of the entire block — and when Jen takes a look at the footage from the previous night, feigning interest in the system itself, she’s horrified to see the image of Steve arriving at Jen’s house, followed by Judy getting in Steve’s car later that night and driving away. (Even worse? Karen never erases any of this footage. She keeps it all in the cloud!) 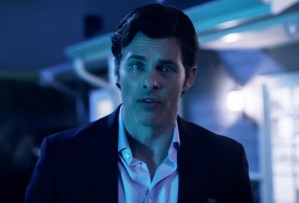 And since Karen just can’t seem to help prying into other people’s business, she takes off Jen’s pool cover when she hears a strange noise coming from underneath it. Jen can’t stop her quickly enough, but when Karen removes the cover, she doesn’t find Steve’s body or any blood in the pool: It’s just that wooden bird figurine that Judy had given Henry in last season’s finale.

Later that night, Jen invites Judy to stay at her place, after learning that Judy plans to sleep in her car otherwise. As they watch Facts of Life together, Judy weeps over Steve’s death, remarking that she can’t imagine her life without him now that he’s gone. She doesn’t blame Jen for what happened, though: Jen had told her that Steve was trying to strangle her the night before, and she killed him out of self-defense, which is an explanation that Judy easily buys.

But, as we learn via flashbacks, Jen’s story isn’t true. When she had asked Steve to leave her yard that night, Steve had insisted that “I’m not going anywhere until you tell me where the f—k Judy is.” That’s when she pointed the gun at him… but then she lowered it moments later without using it, asking Steve once again to leave. Instead, Steve started taunting Jen about her life — “Poor little widow, all alone, cheating husband. Boy, he was miserable, wasn’t he?” — and just when he decided to leave Jen’s house after all, she snapped, taking that wooden bird figurine out of her bathrobe pocket and bludgeoning him over the head with it. (As Judy sobs over Steve’s death in the present day, Jen seems like she’s going to tell her the truth… then decides against it.)

The next morning, perhaps driven by a fresh wave of guilt, Jen offers to let Judy stay with her again, at least until Judy gets back on her feet. But their pleasant morning is interrupted by a knock at the door, which they open to find… Steve?!?

EPISODE 2 SPOILERS AHEAD! If, like us, you just had to find out how James Marsden could possibly be back on the show, you may have jumped straight into Episode 2… which revealed that Steve has a “semi-identical” twin brother named Ben, and that’s the man on Jen’s doorstep. He doesn’t bring great news, though: Steve and Ben’s mother has started to worry about Steve’s whereabouts, and since the FBI is also on Steve’s tail, Ben asks Jen and Judy if they have any idea where he is. (Gulp.)

Your turn! What did you think of Dead to Me‘s return? Did you see that episode-ending twist coming? Grade the premiere in our poll below, then drop a comment to back up your choice!