The title of How to Get Away With Murder’s penultimate episode indicates that Annalise Keating is dead — and though Annalise’s demise turned out to be metaphorical (at least for now), a much more literal death took place before the hour was over.

Elsewhere in Episode 14 — the second-to-last ever! — Annalise’s trial got underway, Frank learned a life-changing secret and two members of the Castillo family made surprising returns. Read on for the details of “Annalise Keating Is Dead”:

SHOTS FIRED | First, we get to see the rest of Annalise’s conversation with Bonnie, in which she revealed last week that Frank is Hannah and Sam’s son. Now that she has this intel about Hannah and Sam’s relationship, Annalise thinks she can get Hannah on her side at trial. After all, surely Hannah would rather betray the governor and testify on Annalise’s behalf than let the truth come out about her abusive behavior, right?

Bonnie consults with Hannah’s lawyer, Floyd, and comes back to Annalise with an offer: Hannah wants Annalise to sign a nondisclosure agreement and agree to a steep $100 million penalty if she tells anyone else about Frank being Hannah’s child. It’s a big ask, but Annalise agrees to it, fully believing that she needs Hannah on her side in order to win at trial. Later, though, Hannah has another, much bigger request: If she testifies against Gov. Birkhead, and Annalise wins her case, she wants Annalise to admit publicly that she killed Sam. (?!?!) 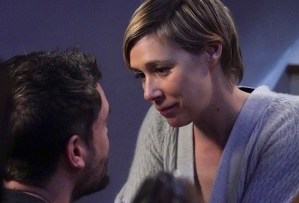 Both Bonnie and Tegan — especially Tegan — think it’s ludicrous that Annalise would even consider agreeing to that. But Annalise sees it differently. She continues to insist that Hannah is the best witness she has, and even though she could lose everything by admitting to Sam’s murder, she seems at peace with that. In fact, maybe starting over would be the best thing for Annalise to do, since her life has sorta been in shambles for the past few years. So, despite Tegan’s attempts to stop her, Annalise puts her signature on that NDA, announcing as she leaves the room that “Annalise Keating is dead.”

Naturally, though, Annalise’s plan hits a snag. When Floyd visits Hannah’s house later that night to get her signature on the paperwork, he finds that she’s been shot and killed. The death is currently being ruled a suicide — the gun was in Hannah’s hand when her body was found — but when Bonnie delivers the news to Annalise, Annalise is certain that Gov. Birkhead had Hannah killed. That’s when Bonnie tearfully suggests that Frank might have murdered Hannah instead.

“Why would Frank kill Hannah?” Annalise asks, seeming to already know the answer. And in a flashback to an earlier conversation between Bonnie and Frank — in which Frank is getting sentimental about his love for Bon-Bon — Bonnie reveals to him that he is Hannah and Sam’s son. (We don’t see Bonnie explicitly say those words, but she does share that Hannah and Sam had a child, and it was a boy — and judging by the horrified look on Frank’s face, he’s connected the dots, though we don’t get any concrete answers about who killed Hannah just yet.)

DON’T REST ON YOUR LAURELS | Meanwhile, Annalise has a trial to worry about, including the damning (and false) testimonies of Connor and Michaela. But in a surprising turn of events, Laurel makes her long-awaited return to Philadelphia, and her time on the stand might just change the verdict completely.

Michaela is first up, and she tells assorted lies about the night Sam died, including that Wes was the one to push Sam over that railing (when it was actually Michaela). She also lies that Annalise and Wes were sleeping together, which seems to be a stipulation in her new immunity deal with the FBI. During the cross-examination, Annalise confronts Michaela about the call she made to ICE to get Simon deported — she even plays the audio of it! — but Michaela denies that it’s her voice on the recording, and she leaves the stand with her feathers mostly unruffled by Annalise’s questions.

Next, Connor gives his testimony, and he repeats Michaela’s point that the Keating Five disposed of Sam’s body because they worshipped Annalise, and they would do anything to please someone as influential as her. During the cross, Annalise reveals that the gay conversion therapy camp Connor wrote about in his Middleton essay — the one he claimed to have gotten shut down — never existed in the first place. And when she presses him on other lies he’s told, including the fact that he initially pretended to be interested in Oliver in order to get intel about a case, the questioning quickly goes off the rails. Connor turns to the jury and urges them to see “what a bully she is,” and the judge threatens to hold Annalise in contempt, bringing the cross to a halt. 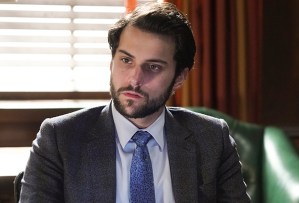 It’s Laurel’s testimony, though, that really upends everything. Earlier that day, Annalise and Frank had cornered Laurel in the courthouse’s parking deck, begging her not to lie on the stand. But even after hearing Annalise’s best arguments, Laurel had stood her ground, insisting that she was doing this to protect her son.

Once she’s under oath, Laurel begins repeating the same lies that Connor and Michaela told, namely that she did unethical things for Annalise’s cases because “you don’t say no to Professor Keating.” But just as the prosecutor is accusing Annalise of brainwashing her students, Laurel suddenly has a change of heart. Looking a bit queasy, she reveals to the jury that her previous statements were lies fed to her by Agent Lanford; Annalise was not sleeping with Wes, and she didn’t order anybody to kill Sam. “I’m sorry I lied, Annalise,” Laurel concludes. (Tegan, naturally, is thrilled by this new development, but Annalise isn’t convinced that the jury will now exonerate her. It’s Laurel’s word against Connor and Michaela’s, and Nate still needs to testify, which is why she was banking on Hannah’s help.)

As the trial continues, Connor starts to worry that Michaela got a better immunity deal than he did… mostly because Frank flat-out says that Michaela got a better deal. Plus, Laurel reveals that she negotiated a deal for probation and no jail time, which doesn’t help Connor’s mounting concern (even though he negotiated immunity for Oliver, which is a big win). Michaela initially lies that she and Connor got the same deal — which puts them both in jail for five years — but after Laurel’s game-changing testimony, she reveals the truth. She also negotiated probation with no jail time, leaving Connor as the lone student who will go behind bars. Michaela tries to assure Connor that he can change his deal with Lanford… but their conversation is interrupted by Laurel, who shows them a news article that Xavier Castillo’s body was just discovered.

Speaking of Xavier, Nate — who killed him a few episodes back — pays Jorge Castillo a visit in prison, insisting that the feds will lower Jorge’s sentence if he helps Nate get back at the governor. Jorge doesn’t seem persuaded… but later in their conversation, Nate shows him the news article announcing Xavier’s death, prompting Jorge to burst into tears. “How do I know this wasn’t you?” Jorge asks, and Nate convincingly counters that if he had tracked down Xavier, the man would be in FBI custody right now and not dead. He seems to make Jorge believe that Gov. Birkhead was responsible for Xavier’s murder, urging Jorge to testify against the governor at Annalise’s trial. “Take the stand,” Nate presses. “Tell the truth. Do it for your boy.”

OK, your turn. What did you think of Murder’s penultimate episode? Any last theories before next week’s series finale? Drop ‘em in the comments below!