After leaving us in suspense for two weeks, How to Get Away With Murder finally revealed the truth about Sam Keating’s relationship with his sister in Thursday’s episode — and, uh, it was icky.

As some of you actually quasi-predicted in the comments section of our April 16 recap, Sam and Hannah had an incestuous relationship when they were teenagers, which led to Hannah getting pregnant when she was a senior in high school. But what does this have to do with Annalise’s trial? And which Murder character was revealed to be Hannah and Sam’s offspring? Read on to find out… and join me in wondering why this show has now introduced four incest-related storylines over the years, including Bonnie’s upsetting childhood, the questionable relationship between Caleb and Catherine Hapstall back in Season 2 and, as TVLine reader JJ reminded me, the sexual abuse that Annalise experienced as a girl. Three was more than enough! And maybe even too many!

WHOA, BABY | We pick up with Vivian Maddox, who is sharing her theory about why Hannah Keating has it out for Annalise. We learn that Sam had cheated on Annalise with Vivian back in 2005 — and though Annalise isn’t all that shocked by Sam’s infidelity, Vivian suggests that Sam always used sex to get what he wanted, and it was a tool he used to manipulate the women in his life. “And what woman do you think he learned that from?” Vivian asks Annalise, hinting that Hannah was the woman in question. Annalise is initially baffled by Vivian’s thought process, especially since Sam never explicitly told Vivian that he and his sister were intimate. But “Hannah and Sam were desperate for love,” Vivian insists, “so they found it in each other.”

And Vivian has some other receipts to back up this theory, even if she never heard it from Sam himself: Through some research, she’s learned that children who were neglected — as Sam and Hannah were by their parents — frequently turn to incest, and it would explain why both of them became psychologists, likely in an attempt to understand their own incestuous behavior. In fact, as we’re reminded in a brief flashback to Season 1, Annalise once made her own suggestion to Hannah that she and Sam had a disturbing relationship. “How does the saying go? ‘Incest is best, put your brother to the test’?” Annalise had taunted. But in the present day, Annalise scoffs at Vivian’s theory, then kicks her out — and it isn’t until later that she starts to wonder if Vivian is right. 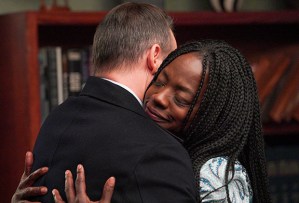 Much of this episode is told through flashbacks to 2005, where we see more of Annalise and Sam’s fraught relationship following the death of their child. And as the hour continues, Sam drops more and more hints that there may have been sexual abuse in his past, though Annalise doesn’t seem to interpret his words that way at the time. For example, when Sam catches Bonnie and Frank fooling around in the basement, he suddenly expresses great concern about Bonnie to Annalise, citing Bonnie’s history of sexual abuse. “I have personal experience with this, too, Annie,” Sam tells his wife, though she seems to think he’s merely referencing being neglected by his parents. Then, in a later argument with Annalise, Sam suggests that he’s “broken in ways [Annalise] can’t fix,” and there are things about his past that Annalise might not want to know.

Meanwhile, in the present day, Annalise grows more convinced that Sam and Hannah did have an incestuous relationship, which would explain why Hannah has been gunning for Annalise all this time. It’s not just that Hannah thinks Annalise killed her brother; she also thinks Annalise stole her lover (and maybe killed him, too). Later, Annalise admits to Bonnie that she now believes Vivian’s theory. “He was so good with us. That’s because he was us,” Annalise says, adding that she and Bonnie loved Sam because he understood their trauma. “He could heal others, but he couldn’t heal himself.” And when Bonnie suggests that Sam’s trauma doesn’t erase all of his very real mistakes and misdeeds from over the years, Annalise agrees. “I know. But it makes me see him,” Annalise counters. “And I don’t know what to do with that.”

With all of that said, none of this matters without some legitimate proof that Hannah and Sam were intimate together, so Annalise enlists Tegan’s help to find something usable — and they get it. Though Hannah’s high school records look uninteresting at first, Annalise notices that she was absent for 83 days of her senior year… which may have been due to a pregnancy, and not the mono diagnosis that her doctor cited at the time. After doing the math, Annalise and Tegan suspect that Hannah gave birth in the first few days of March that year, then returned to school immediately on March 5 — and Annalise looks nauseous when she realizes she knows somebody born on March 2.

A few days later, after putting a rush on some DNA test results, Annalise’s suspicions are confirmed. She invites Bonnie over to her apartment and delivers the bad news: Hannah and Sam did sleep together, and they did have a child — and with the help of a bloody Band-Aid that Frank had left in a Caplan & Gold trash can, the DNA test confirms that Frank is Hannah and Sam’s son. (!!!)

* Nate does some research on FBI Agent Pollack, after learning from Xavier Castillo that she’s dirty. He uncovers some paperwork from the car accident that nearly killed Bonnie earlier this season — the one that Pollack caused by cutting Bonnie’s brakes — and his suspicion grows when he realizes Pollack was captured on a traffic camera not far from where the accident occurred. Knowing full well that the FBI can’t win its case against Annalise without his testimony, Nate presents the traffic cam photo to Agent Lanford and suggests Pollack is working with the Castillos. And if Lanford is really as clean as he claims to be, he should look into Pollack — “or who knows what I’ll say on the stand,” Nate warns.

Later, Lanford gives Nate a call and reveals that he was right: Pollack has been in direct contact with the Castillos for a year, and she’s now seated in an interrogation room at the FBI offices. But when Lanford asks Nate to share more intel on the situation, Nate says he’s already revealed everything he knows, and now it’s time for Lanford to figure out the rest himself. 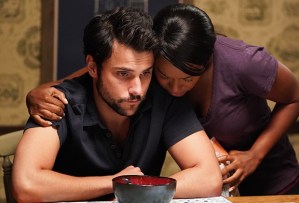 * In other FBI news, Michaela and Connor also spend some quality time with Lanford in this episode, on the heels of that recording played at Annalise’s DOJ hearing in the last episode. Initially, Lanford suggests rescinding Connor and Michaela’s immunity deals, given that they violated their agreements by speaking to Annalise about the FBI. Later, though, he offers to keep the deals in place… provided that Connor and Michaela agree to new terms, which means they’ll have to give even more testimony at Annalise’s trial.

Both students stay trapped inside the FBI building for hours, refusing to agree to the new deals; we don’t actually learn what the new terms are, but Michaela hints that Lanford is asking her to “commit perjury times 10” by signing the latest agreement. Then, both she and Connor warn Lanford that they’re suspicious of the FBI. Michaela flat-out asks if Lanford is dirty, and Connor threatens him after Oliver is brought up as a potential co-defendant in this case: “I might go to prison, but the whole time I’m in there, I’m going to work to expose you as the corrupt agent who disgraced the FBI.”

The next time we see Connor and Michaela, they’re back at home with Oliver, who reveals that they got to keep their original deals. But when Michaela leaves the room, Connor drops some big news on Oliver: He did sign a brand-new immunity agreement, after all. (Now that Lanford knows about Agent Pollack’s side hustle, though, those immunity deals might not mean much.)

Your turn! What did you think of Thursday’s episode, and the truth about Sam and Hannah? And are you starting to wonder if we’ll ever get answers about that Wes twist from months ago? Hit the comments!