We all have those TV shows that we like to keep on in the background and casually glance at while we’re folding the laundry, right?

Well, with its final batch of episodes, How to Get Away With Murder is proving it does not fall into that category — not that it was ever a great series to watch passively, mind you.

With only a few weeks left in its run, the ABC drama is moving mighty quickly through its dense remaining storylines. Case in point: Thursday’s episode killed off one character, brought another one back, introduced a major development in Annalise’s forthcoming trial and blew the lid off the FBI’s plot to take down Annalise. (We’ll get to take a little breather next week, though: The show is off for one week and resumes on April 30.)

Read on for the details of “Let’s Hurt Him”:

SISTER FROM ANOTHER MYSTERY | The episode picks up with Gabriel’s revelation to Connor, Michaela and Oliver that the FBI killed Asher — a piece of information that none of them seems to buy. They worry that Gabriel’s wearing a wire and trying to frame them, or perhaps he just wants to make them paranoid. But Gabriel explains everything he witnessed (including his initial suspicion that Laurel was the killer), and when he leaves, Oliver confesses that he thinks Gabriel might be telling the truth.

Meanwhile, Gabriel’s mother, Vivian, returns to Philadelphia after Gabriel’s desperate phone call to her last week. Vivian pays a visit to Annalise and, rather suddenly, reveals to her that the FBI killed Asher, including all the details about what Gabriel saw and why he initially kept it a secret. She also tells Annalise that she has some information that could help Annalise’s case… but she’ll only cough it up if Annalise agrees to protect Gabriel. Given their last encounter, Annalise is skeptical of Vivian’s intentions — “Fool me once, girl,” Annalise says before walking away — but later in the episode, she decides that she wants whatever intel Vivian claims to have. (And she does hold up her end of the deal by protecting Gabriel. But we’ll get back to all that!)

When Vivian arrives at Annalise’s place at the end of the hour, she says that she knows who started the war against Annalise, and it wasn’t the FBI or Gov. Birkhead. To Vivian’s surprise, Annalise correctly guesses Sam’s sister, Hannah Keating, as the culprit — but Vivian presses her on why Hannah hates her so much, and Annalise doesn’t seem to know the reason. “Because she’s a sad, lonely bitch who thinks I killed her brother?” Annalise suggests. But that’s not it, Vivian says. Rather, this war got started because of “what happened with her and Sam.” And that’s when the credits roll, leaving both Annalise and us in suspense for the next two weeks.

And though it might seem like Hannah’s name was dropped out of nowhere, Sam’s sister was actually mentioned several times during Thursday’s installment. Earlier in the episode, Gabriel was frustrated with Vivian for blabbing to Annalise about Asher’s real killer, and he played the phone recording of Frank threatening to kill him a few days earlier. That’s when Vivian revealed that Frank isn’t just some random associate of Annalise’s; rather, Hannah and Sam used to know Frank and his family years ago, and Hannah is the kind of person that Gabriel ought to avoid. 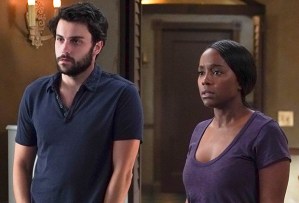 CAPITAL GAMES | Unfortunately, Annalise’s list of concerns doesn’t end at a bitter ex-sister-in-law. At the top of the hour, during a hearing to get her house arrest locations expanded, Annalise is blindsided by the news that AUSA Montes plans to make Annalise’s case a capital trial… and she’ll be pursuing the death penalty. (As if those funeral flash-forwards weren’t concerning enough!) Annalise and Tegan try to fight Montes’ notice of intent right then and there, but the judge says they’ll have to face a special Department of Justice committee if they want the death penalty taken off the table.

In the meantime, Michaela learns from her lawyer that AUSA is trying for the death penalty, and she and Connor seem nauseated at the idea that their false testimony against Annalise could ultimately lead to her death. Plus, now that they’ve had a chance to stew on Gabriel’s theory about the FBI killing Asher, they seem to believe it, and they worry the FBI has their house bugged. (Connor, at the very least, was followed by a black SUV while on a run the previous night, which is… not great.)

After a few failed attempts to get out of their deal with the FBI — who might be planning to kill Connor and Michaela next, for all they know — Connor suggests that they pay a visit to Annalise. Upon meeting with her, they play Annalise the audio of Gabriel telling them that the FBI killed Asher, which they had secretly recorded while he spilled the beans. Michaela suggests that Annalise should share the audio file in court; it would get the charges against Annalise dropped, and they could break their deal with the FBI. Annalise counters, however, that only the Asher murder charge would get dropped because of that recording, since there are obviously other informants — aka Connor and Michaela — who are planning to testify to the remaining charges. (Awkward!)

Connor and Michaela then come clean about their immunity deals, confessing that they feel terribly guilty, and they only signed because the FBI used Asher’s death to coerce them into taking a deal — and it worked. But just when it seems that Connor and Michaela have convinced Annalise to play that recording of Gabriel in court, there’s a twist: Annalise does play a recording at her hearing with the DOJ committee the next day, but it’s not of Gabriel. Instead, it’s an audio file of the very chat she just had with Connor and Michaela, which she had been recording without their knowledge. And it’s a doozy of a conversation that name-drops Agent Lanford (who’s in the room to hear it!) and alludes to the FBI’s shady practices. (This recording, by the way, is Annalise’s method of protecting Gabriel: She’s still able to publicly accuse the FBI of killing Asher, but Gabriel’s name never comes up.)

Though Annalise wasn’t originally planning to play that recording at her hearing, it seems to have the desired effect: The DOJ committee rules that a) the FBI must conduct an internal review of how any immunity deals were reached in this case, and b) the death penalty is officially off the table for Annalise’s trial. (Related: Annalise and Tegan’s tearful hand-hold upon hearing the good news might be my favorite moment of this episode. Or this season. Or this series!)

The news is decidedly less great for Connor and Michaela, though: Following Annalise’s hearing, multiple FBI agents show up at their house, revealing that Annalise played a recording of them in front of the committee. “Do we need to cuff you?” Agent Lanford asks them, though we never actually see if he follows through with that threat. 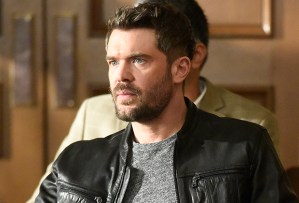 ‘HE’LL NEVER SEE YOU COMING’ | After learning that the FBI may have killed Asher, Annalise tells Frank to do some research on Agent Pollack — and he locates her quite easily the next day. Frank watches from a distance as Agent Pollack orders coffee at an outdoor café… and when Pollack leaves the to-go cup on a table before walking away, it’s Xavier Castillo who then comes over and swipes the cup, which contains a passport and plane ticket to Brazil.

Next time we see Xavier, Frank has got him tied up in a warehouse somewhere — and despite Bonnie’s advice that Xavier would be much more valuable to them in a courtroom, Frank decides to repay the torture that Xavier made him endure earlier this season while he searched for Laurel. Each time we see Xavier, he’s a little more bloody, and he’s giving up some decent intel, including the revelation that he bought Agent Pollack off, but she’s the only dirty FBI agent working for the Castillos.

Meanwhile, after Annalise learns that Frank has located Xavier, she uses that information to make a deal with Nate. Though Nate is highly skeptical that the FBI, the Castillos and Gov. Birkhead have all been conspiring against Annalise this entire time, she sweetens the pot by offering to let Nate confront Xavier, better known as the “coward” who put a hit out on Nate’s father. In return for some facetime with Xavier, though, Nate must promise that he’ll testify on Annalise’s behalf at trial, rather than against her. “So, pick: Who do you hate more?” Annalise asks Nate. “Me, or the man who killed your father?” And the next time we see Nate, he’s approaching Xavier in that warehouse — so that answers that question.

Though Nate tries to get a video recording of Xavier confessing to Nate Sr.’s murder, Xavier refuses to admit it, arguing that he’s obviously under duress and his confession would never be admissible in court. But after Nate carries out some torture of his own, Xavier starts talking a bit more: He swears that Nate Sr.’s death was all political, that Gov. Birkhead has called every shot, that she wanted to destroy Annalise after her Supreme Court win. But even as he begs Nate to believe that his father was merely a pawn in the governor’s game, Nate remains unconvinced that there isn’t some bigger, better reason why his father was killed.

At first, it seems that Nate is willing to spare Xavier’s life, saying that he’ll “let Frank decide” whether Xavier dies or not. But just as Nate is about to leave the warehouse, Xavier adds that Jorge Castillo is really who Nate wants; it was Jorge who called for the hit on Nate Sr., because he wanted to get back at Annalise for putting Jorge in jail in the first place. Xavier even offers to help Nate get to Jorge: “He’ll never even see you coming… He deserves it.”

“I agree,” Nate says. “So let’s hurt him.” And with that, he suddenly breaks Xavier’s neck, killing him instantly. But even though Xavier’s murder might have seemed ideal in the moment, Nate might have just made an enormous mistake by killing his enemy. “What did you do?” Frank asks, when Nate cryptically reveals that he “took care” of Xavier. “Nate, what the hell did you do?!” But Nate remains silent.

OK, your turn! What did you think of Thursday’s Murder episode? Were you buying what Xavier was selling — and did you see his death coming? Hit the comments!