Things will get hairy in Staten Island, when What We Do in the Shadows‘ Colin Robinson rises up the corporate ranks at… whatever kind of company it is that he works for.

This Wednesday at 10/9c on the FX comedy, the energy vampire enjoys a feeding frenzy when he stumbles into a leadership position at the office. How might this amped-up power affect his roommate relations, as well as his hairline? TVLine invited scene stealer Mark Proksch to talk to us as much as he wanted.

TVLINE | I understand that congratulations are in order for Colin Robinson.
Yeah, there’s been a bit of a promotion!

TVLINE | What did he possibly do to deserve this? Or is he just that good?
As with most promotions, it’s not based on meritocracy, it’s based on longevity. [Laughs] He gets it because someone dies. Or leaves.

TVLINE | What kind of a boss does he prove to be?
He is the type of boss that you find in most jobs. He has a captive audience, and he runs with that. [Laughs] You have to put up with his dumb jokes, and cliche after cliche of encouragement about working….

TVLINE | How do the roommates react to Colin Robinson’s big news?
They don’t react well. It also is a bit of a story that Colin just wants to be friends with them, but he realizes — and kind of what sets off a power struggle — is they don’t necessarily want to be friends with him.

TVLINE | The promo hints that this promotion will amp up his powers as a vampire.
Yes, he becomes much more powerful because of it. This captive audience gives him an unlimited supply of energy that he can tap into at will. He turns it on his roommates to some extent, so there’s a power struggle there that people will find interesting. 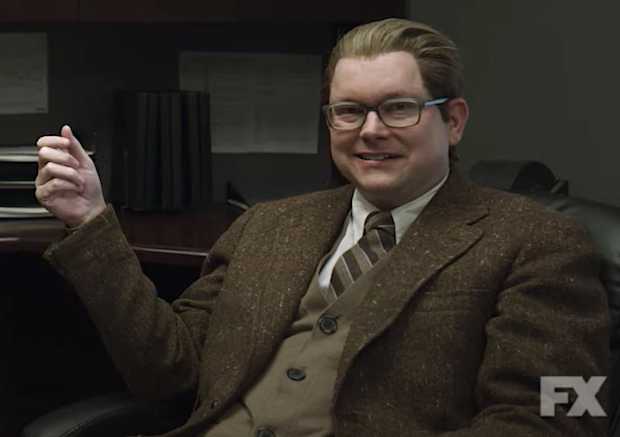 TVLINE | He even sprouts quite a mane at one point. When is the last time that you, in real life or for a role, had that much hair on your head?
Well, that was my actual hair. We filmed that in the summer and then I shave it the rest of the year. [Laughs] No, no, speaking of a dumb Colin Robinson joke….

Gosh, the last time I had that much hair was probably my late-20s. That was when I finally decided that I look ridiculous with one strand of hair curled over and over on my head. So I just shaved it.

TVLINE | What Colin Robinson has going on is almost Trump-ian.
Yeah! And he gets some arrogance from that, so maybe there’s a throughline there.

TVLINE | At one point he corrects an employee who addresses him as “Colin,” saying: “No — Colin Robinson.” Was that a nod to the fact that we all seem to call him by his full name, every time?
Yeah, it’s just this weird thing…. I don’t know if they planned on it, but from the very beginning, to distinguish me from them from the other vampires, they would call me by my full name, and I think that’s carried over into the storylines now. Plus, it’s something he likes — for whatever odd reason!

TVLINE | One thing this season has reminded me of is that when it’s just Colin in a scene, the show’s palette is completely different. He’ll be sitting in his basement room in off-white pajamas, on a beige bed, with eggshell walls….
One day I walked into the wardrobe room and they had all of the casts pictures up, and for everyone else they had all these beautiful lookbook visual photos around the character — and above mine, it was just a beige dot. [Laughs] That kind of tells you everything you need to know about him and his world. Ultimately he is a spider who draws people into his web, so he can’t do anything out of the norm that might spook people. He’s just a beige guy!

TVLINE | The blazer he wears as boss is perhaps his biggest swing yet, in that it has textured fabric with some color in it!
Yeah, and that’s always discussion, trust me! “Is this too much for Colin? Would he go this far? Would he have a pattern on his socks?” 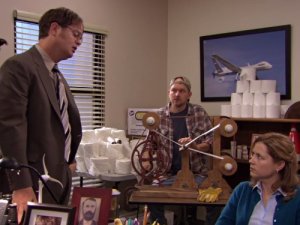 TVLINE | I was reminded when prepping for this that this is not your first mockumentary series, that you had been on The Office.
Yes, I played Nate, who was Dwight’s assistant  — until he realized how much of a moron I am, so I ended up in the warehouse. Nate Nickerson had no confidence whatsoever.

TVLINE | Give me one last tease about What We Do in the Shadows Season 2.
This season you’re going to see a lot of great guest stars (including Star Wars‘ Mark Hamill), just like the first season. And every episode kind of takes us into a different place and plays on the whole vampire world, but in essence it’s a roommate comedy. It’s Friend with fangs. And it’s somewhat of a family comedy at the same time.

TVLINE | Except in this case, one family member is highly capable of killing the others.
Exactly, just like Leave It to Beaver or Dennis the Menace.

Want more scoop on Shadows, or for any other show? Email InsideLine@tvline.com and your question may be answered via Matt’s Inside Line.