The Conners dropped the curtain on Season 2 with the threat of imprisonment hanging over at least one family member’s head.

In the final moments of Tuesday’s closer, Becky became a reluctant accomplice when deported baby daddy (and newly-minted hubby) Emilio illegally reentered the U.S., setting up what exec producer Bruce Helford describes as a “rough” Season 3 for Beverly Rose’s parents. Sister Darlene’s relationship with Ben also faces new challenges after the former twisted the latter’s arm into using their “new house money” to bail out Dan. On a more upbeat note, Dan and Louise ended the season on relatively rock-solid ground, although Helford hints that new “complications” are on the horizon for the couple.

Below, Helford and fellow Conners EPs Dave Caplan and Bruce Rasmussen break down the finale’s biggest curveballs, offer an update on the non-yet-ordered third season (and the potential scheduling hurdle they face with one cast member), and open up about John Goodman’s initial unease about Dan finding love in the wake of Roseanne’s death.

TVLINE | ABC still has not formally renewed the show. What’s the holdup?
HELFORD | They’re just ironing things out. Obviously, there are new question marks because of what’s going on and how we all do this [in the era of COVID-19]. ABC definitely wants us back and we want to come back. The four core actors [i.e. Goodman, Sara Gilbert, Laurie Metcalf and Lecy Goranson] have already signed their deals.

TVLINE | Some of your actors juggle other TV gigs with The Conners. With so many schedules in flux right now — for example, Season 2 of Goodman’s HBO comedy Righteous Gemstones  — does this make Season 3 a more complex puzzle to put together?
HELFORD | Some of the complications just go away. Righteous Gemstones was never in first position for John. So he actually becomes available to us sooner than he would’ve become available to us. The tricky one is Emma [Kenney, who plays Harris] because she’s on Shameless and they now may start shooting [their final season] around the same time we [begin production on Season 3]. She’s become like the co-lead on that show after Emmy Rossum left, so it’s going to be tricky. We always find ways to work around schedules. We like the actors being able to explore other things. We’ll make it work.

TVLINE | Dan and Louise are now a full-fledged couple, but Katey Sagal has a high-profile pilot at ABC that could someday keep her very busy. How will you deal with that potential wrinkle?
HELFORD | It’s an ABC pilot, which always helps. And we spoke to Katey and she said she will definitely be doing more Conners. We don’t know what her complete availability will be. And now, of course, [because of COVID-19] her pilot was never shot. It will probably take [a new series] longer to get on its feet than we will. God willing, we’ll be back shooting in August shooting. [Rebel] would probably [shoot] further [down the road].

TVLINE | So the plan is to go full-steam ahead with Dan and Louise?
HELFORD | After all the work [we did getting them together]? Yeah. [Laughs] We don’t want to have to kill anybody else off. [Laughs]

TVLINE | You have mostly avoided any conflict between Louise and Darlene/Becky. And it seems like that area would be ripe for conflict. Why have you steered away from that?
DAVE CAPLAN | It was an intentional decision to go slow with [Dan/Louise] before we introduce those other complications. We were so cognizant about wanting to do that relationship right and honestly before other complications arise. But we have a lot more [episodes] to write so I think there are going to be plenty of complications [to come].
HELFORD | I think the kids were all about, “Dad’s lonely. Dad needs someone for the rest of his life to take care of him.” And they seem to all like her. Jackie and her had their problems but they seem to have patched that up. But there are lots of other complications when someone steps into their lives and becomes part of the decision-making. 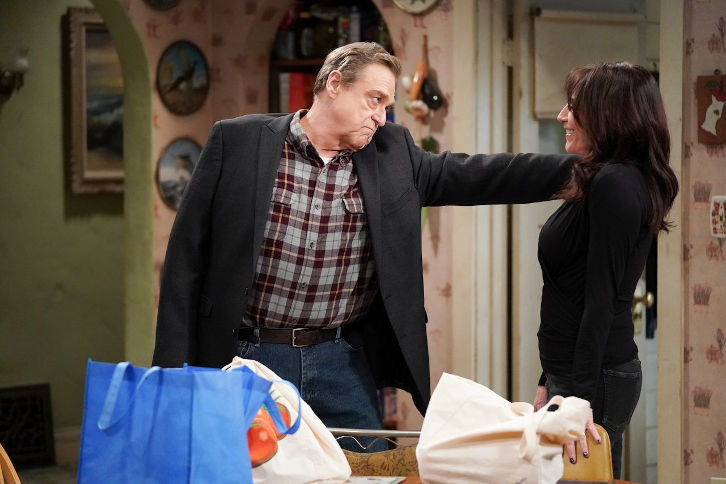 TVLINE | John Goodman previously seemed resistant to the idea of Dan moving on romantically. Have his feelings changed?
BRUCE RASMUSSEN | At the beginning [of the series] we talked to him about how slow we were gonna go and he was absolutely thinking about Roseanne [and Dan’s] relationship. But as we went along, Katey was so great; we could see John starting to have fun with her and bounce off of her. I think he’s a lot more comfortable now.
CAPLAN | John has lived with that character for so long. He’s so deep into Dan that he has an internal metronome about how fast things should go and we wanted to respect that. So we talked to him and made sure that he understood how fast we thought we could go and wanted to make sure he was on board with that.
HELFORD | It took him a while… We did go slow for John.

TVLINE | Darlene has really put Ben through the wringer. She cheated on him. She berates him about how he parents her children. And in the finale she put her dad before him. At what point does he just walk away?
RASMUSSEN | [Laughs] We made jokes about that in the [writers’] room, that he’s a very long-suffering guy who loves her an astronomical amount.
HELFORD | She’s a Conner first, above all things. That’s how she was raised. They really are a circle-the-wagons family. And one of the wagons is on fire. But it’s definitely taxing Ben a little bit.
CAPLAN | All of our female writers were like, “We’ve never met a guy like that. That guy doesn’t exist! He’s too perfect!” [Laughs]

TVLINE | Is it time to make Jay R. Ferguson a series regular?
HELFORD | It hasn’t really come up come up yet. Jay and Sara have a long history. They were buddies since they were teenagers. And their chemistry is so freakin’ good. We didn’t know [the Darlene/Ben romance] was going to be long-term. We actually had plans at one point for her to be thinking about somebody else and kind of blowing this relationship up. But as we watched them we [realized] you can’t get much better than the way they act with each other 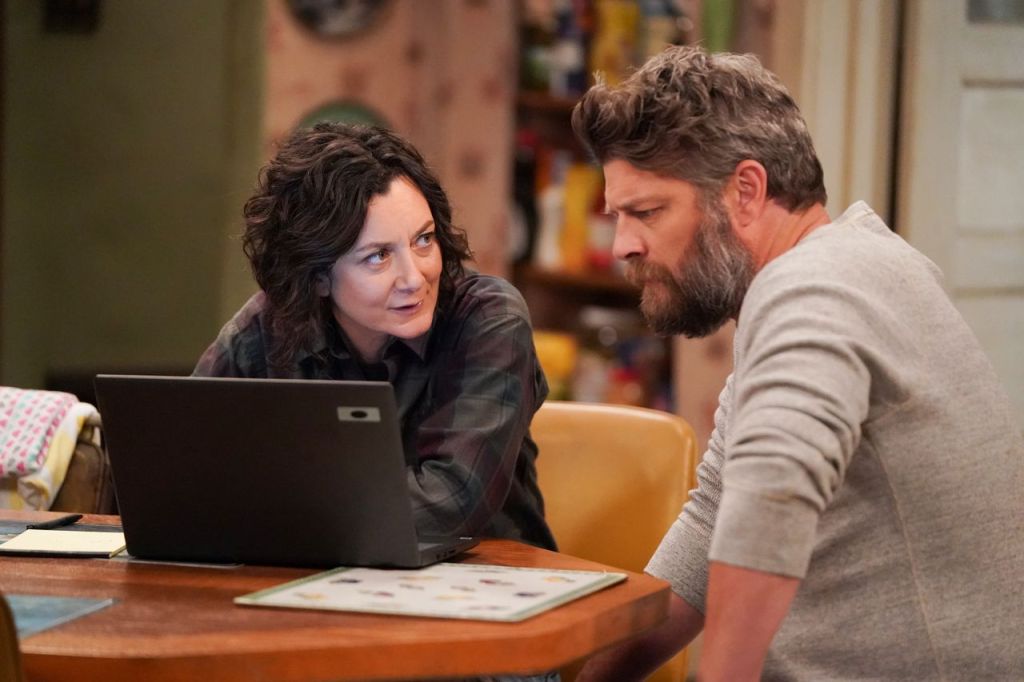 because they’re two alphas going at it. And there’s a genuine affection between them in real-life. We have a lot of regulars. But certainly I think it’s likely Jay is going to be around for a long time.

TVLINE | Was it always the plan to bring Emilio back into the picture in the finale after an entire season away?
CAPLAN | Their chemistry is so good that we knew we needed to get him back. And we were working towards… finding an honest, legitimate way to bring him back in the right time frame. One of the things we try to do is be patient and hope our audience is patient with us, because there’s a realistic time frame to these things. And we also knew that him having to live near her and wanting to see the baby would create tremendous complications in her life and her dating life and in their relationship.
HELFORD | We researched what it really takes to get someone back in the country. And, unfortunately, the situation is so hard that sneaking back in became his only option. The marrying option is a two-year wait and then you hope something goes right. It wasn’t our first choice to have him sneak back in but we realized that was his [best] option if he wanted to be with his child. And so he returned, and at great peril for him [and] Becky, who is now an accomplice. It’s rough territory.