Who would’ve guessed, after season upon season of ongoing enmity between black-ish‘s Pops and Ruby, that their reunion would be the thing that throws the family into chaos?

An ill-timed visit to his mom’s room at the start of the Season 6 finale leaves Dre with a visual he can’t expunge from his memory: Ruby and Pops having sex. Bow’s husband is near-catatonic when the four adults sit down to discuss the fact that Dre’s parents apparently have reunited in secret and are a romantic couple once more. “We have decided to give our love one more shot,” Pops informs them, but Dre isn’t having it. 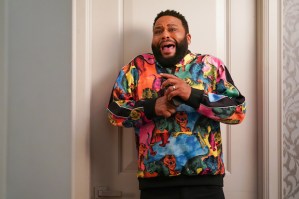 Using the “my house, my rules” concept, Dre marches up to Ruby and says he won’t allow his father to use her like he has in the past. But the reunion was Ruby’s idea, and she tells him not to worry: The things she and Pops used to fight about, like kids and money, aren’t issues anymore. Then she decides to show her affection for Pops by buying him a boat (to replace the one she blew up) so they can sail around Catalina that weekend. 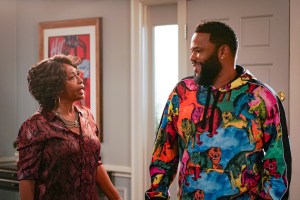 Eventually, Dre realizes that he’s afraid of losing his hard-won relationship with Pops if the two break up again. So he issues an ultimatum: Either Ruby dumps his dad, or they both have to be out by the end of the week. Ruby chooses the latter, devastating Dre.

Only after Bow points out that Ruby is more than just Dre’s mom (“It’s her time now”) does Dre see how ridiculous he’s been. So he and Bow show up to join the kids at the dock to see Pops and Ruby off on their mini-trip. Dre apologizes for his behavior, and his mom forgives him. “You and I have gone through a lot,” he tells her. “And whatever’s gonna happen next, I’m gonna go through that with you, too.”

True story: While watching a screener, I was very worried that Pops was going to croak at the end of this episode. And my relief that he didn’t was so great that it was the first thing I mentioned to series star Laurence Fishburne when we chatted earlier this week. Read on to hear what he had to say about Pops’ new-old romance and how acting in Contagion nearly a decade ago gave him a unique perspective on our current situation.

TVLINE | I have to tell you that when ABC was like, “Do you want to talk to Laurence Fishburne about the finale of black-ish?” I’m like, “Oh my God, Pops is dying.”
[Laughs loudly]

TVLINE | I was worried from the very first moment of the screener until the absolute end! Because there are all these lines fresh starts and new love and how they’re going to get it right this time…
[Laughs] Yeah. [Laughs]

TVLINE | You had me there for a minute.
Well, good. Good. [Laughs] We did our job again.

TVLINE | I’m very glad Pops is going to stick around for the foreseeable future, but this is a new side of him. We’ve not seen him this consistently happy… ever?
No. He’s a happy dude, right?

TVLINE | Do you recall when you first heard that Pops and Ruby would give it another go?
I think [producers] were always interested in exploring that, even as early as Season 3. And it just seemed like now was the right time. It just seemed like organically it made sense, you know?

Zoey has gone off to school, and Junior is still sort of on that gap year, and so that’s starting to resolve itself. Jack and Diane being real teenagers, all of those things that happen in a family, and now the golden years for Pop and Ruby seems to be a natural kind of extension of all of that.

TVLINE | Jenifer Lewis has said how much that you guys enjoy working with each other. Talk to me about playing your scenes now that Ruby and Pops are getting along so well.
It’s fantastic. At least for me, there’s always the underlying affection that they have for one another. That’s never really missing, even in those harsh moments, if you will. I just feel like we have earned this, you know what I mean? Along with our audience, we have really earned this. I think it’s also something that the audience is really hungry for, in a way. 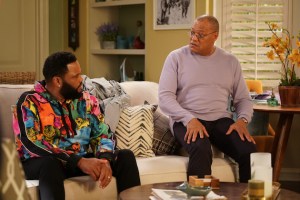 TVLINE | Dre has a realization that he would really miss the relationship he’s built with his father if Pops and Ruby were to break up again. Do you think those feelings are reciprocal?
Good question. Not really sure. I haven’t really given that much thought to that one. As I do think about it, I’m compelled to tell you that it feels like with Pops, he knows how lucky he is to have a son like Dre who’s done so well in spite of his own challenges, and who has the grace to allow Pops to live with him and his family, you know what I mean? He’s acutely aware of that, and at the same time, of course he would never admit it, he’s got to be envious of it. There’s some of that lack of giving Dre the approval that he craves, it really comes from that place.But I also think that he is beyond grateful for the life that Dre and Bow provide for him.I don’t think that’s lost on him, and he would be devastated if that was ever taken away.

And he knows that he can be a bit of a burden. So this is a natural and really beautifully organic way of moving into the next chapter. Pops and Ruby are getting together and they’re going to explore what life in the future will be for the two of them if they approach it differently.

TVLINE | What’s your opinion on whether Pops and Ruby will be successful this time?
They already love each other. So, that part is a given, right? They’re successful in that. So, I think that because the love is there that it’s already successful. But you know, the practical stuff — they’re going to have to figure that out. That’s where the comedy comes in. That’s where you, you know?

TVLINE | Have you heard anything about a potential Season 7? Obviously, everything is shut down right now.
I haven’t heard much about Season 7. I’ve heard that they are attempting to figure out how we can shoot safely, how we can go back into the sound stages. They’re talking about doing things so that everybody stays healthy and that nobody contracts this horrible virus. And that’s going to take some real time and some serious thought.

TVLINE | Along those lines: So many people have been referencing Contagion on social media since the quarantine started. Who knew that when you played the head of the Centers for Disease Control in that movie that it would be real-life training at some point?
[Laughs] Yeah, who knew I was going to be Dr. Fauci? I mean, it’s crazy. I’m having my own Dr. Fauci moment! [Laughs]

TVLINE | If I remember correctly, I think there’s even a line or two where your character in the movie talks about how the United States is made up of 50 states with 50 governors who’ll do what they deem right, so it’s hard to set standards. That was prescient.
[Laughs] Yeah. It was really something. And hey, it’s a great reference for people that want to understand what we’re really dealing with, you know? If you don’t really understand it, if you got questions, it’s a great film to watch to get your understanding for where we really are.

Now it’s your turn. Grade the finale and the season on the whole via the polls below, then hit the comments with your thoughts!