As The CW’s The Flash speeds toward its final two episodes of Season 6, the good news is that Barry got wise to Mirror Iris, who upon being found out was essentially snuffed by her “mother,” Eva. The bad news is that Bar’s actual better half remains trapped in the Mirrorverse.

What is Iris’ next move toward liberating herself from that dizzying dimension? And what lasting damage might this involuntary “quarantine” do to the intrepid reporter? Candice Patton, who previously answered TVLine’s burning questions about the April 28 episode’s husband/”wife” brawl, here previews what’s to come on Tuesday, May 5 at 8/7c and in the makeshift season finale airing May 12.

TVLINE | What is Iris’ next move, still trapped there in the Mirrorverse? And will she need to worry about Eva returning?
That’s a great question. I’m sure she’s worried about Eva returning, how she’ll return, what she’ll do, so her next move is to figure out how to get out of there. In this next episode, you see her get out of [Eva’s] office and travel around the city…. She finds other people that are in the Mirrorverse…. 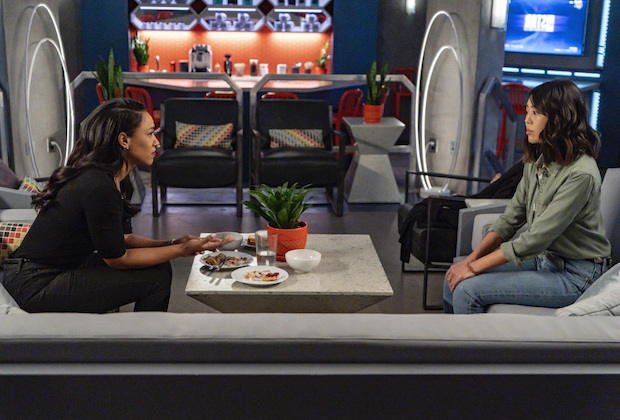 TVLINE | At the conclusion of her brawl with Barry, Mirror Iris seemed to be playing to Iris as an audience as she taunted Barry about how for weeks he had shared well-made pancakes, and his bed, with a phony. Is that fact that Barry was easily duped going to gnaw at Iris at all? Or will he get a pass?
Oh, I think for sure that will get a pass. I mean, he had no idea, so Iris can’t hold Barry at fault for something he didn’t know. 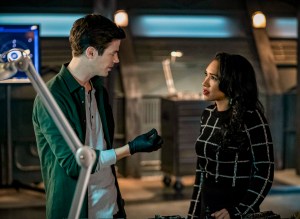 TVLINE | Some of the points that Mirror Iris raised over the weeks about the balance in their marriage — though indelicately phrased — were valid, I thought.
Oh, like in the previous episode, when she manipulated him into leaving…? Yeah, those are all things that the real Iris has had issues with Barry about in the past. They are fair criticisms. He does make trigger decisions without consulting people, that is something Iris has brought up multiple, multiple times, so it’s not far-fetched and she’s not wrong, but obviously she was using that to drain Barry of his power. A bit unfair!

TVLINE | In what ways might Iris be forever changed by her time in the Mirrorverse?
Gosh, you’ve got A) neurodissonance, just to start. Who knows what kind of damage that has on a person? And then B), there is the trauma of being locked up in a Mirror World for so long. It’s kind of like us being stuck in quarantine. Iris has been in quarantine with a crazy person, so there might be some trust issues and some residual trauma from that.

TVLINE | Will Episode 19, even as an unplanned finale, serve up a cliffhanger or two?
I hope so. I’m not sure how they’re going to finish it and edit it. We have to deal with Iris still being stuck in the Mirrorverse, so I have no idea how they’re going to put a button on it.